When the LS contingent first found its momentum some 20 years ago, it was filled with C5 Corvettes , fourth-generation F-bodies and the occasional late-model Silverado. As the years wore on, you began seeing the early swaps come to light. The ’69 Camaros and ’57 Chevys were among the most obvious choice, but then we starting seeing them trickle into everything from Chevelles, Mustangs and Challengers.

We haven’t see too many LS-powered Cougars, perhaps one or two, but when we ran across this 1967 example from Andrew Borodin at this year’s Holley LS Fest, we had to take a closer look! What immediately struck us, was the rather weathered, patina’d appearance.

The patina is particularly interesting, because it’s 100% legit; it’s not man-made, it’s not a wrap, this is the actual result of a budget 40-year old orange respray that later went neglected and had fallen victim to the elements. It works, and the high-rise intake scoop makes it extra cool.

But before we dig too much into the looks of this car, we want to take a look at what’s under (and through) the hood!

Packing a rather desirable BOSS 302 powerplant from a Mustang, Andrew had other plans for his Cougar. With plenty of experience of injecting classic iron with GM LS motivation, including a ’70 GTO, Andrew wanted to take the same approach to his newly-acquired Mercury.

Starting with an aluminum LH8 5.3L truck block, the entire bottom end was left alone, instead, Andrew focused on the little things, to maximize its potential. He ditched the OEM truck oil pan for a 2005 GTO pan, for the sake of fitment. Next, he slid in a GM ASA hydraulic bumpstick, featuring a 226/236 duration, 525.525 lift and a 110 lobe-separation angle. 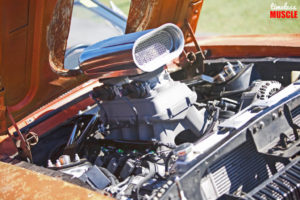 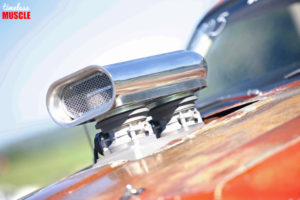 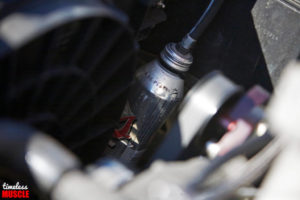 The cylinder heads and remaining components of the valve train have been left alone, with a Holley Hi-Ram intake manifold sitting squarely on top of the engine. What can easily be confused for a pair of carburetors to the untrained eye, from a distance, are dual 87mm GM 4-bolt throttle bodies. A Holley “Bug Catcher” scoop forces incoming outside oxygen into both throttle bodies.

Like any other engine, there has got be a glance of airflow induction and fuel, so a Walbro 255 fuel pump and LS3 injectors shirt the gasoline into each cylinder, and Andrew sourced a LS3 Corvette fuel pressure regulator, set at 58-psi. The air/fuel is dialed in, via, a Holley dominator EFI system that Borodin calibrated himself. The spent exhaust gases are expelled through Hooker iron exhaust manifolds, VR304 mufflers and 2.5-inch diameter tubing.

The LS3 is backed by a Tremec T-56 with G-Force gears and dog-ring engagement. Coupled with an LS7 flywheel, clutch and B&M Ripper shifter, it’s a blend of retro attitude and modern functionality. It help sends power to a Strange 9-inch reared that houses a Detroit Locker differential and 4.33 gears, through a Driveshaft Shop dual CV-style carbon fiber driveshaft. It’s rather unique, and we have yet to see anything else like it.

Set up more for street/strip, rather than autocross like his LS-powered ’70 GTO, the Cougar has been treated to a TCP steering box, tubular front end and coil-over conversion, featuring Varishock shocks/struts. The springs in the front are also from TCP, while the rear split monoleaf springs are lent from Calvert Racing that work with Caltrack bars to keep the rear planted to the pavement. 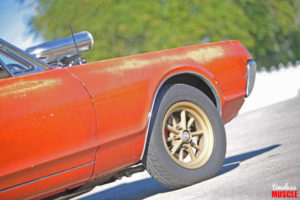 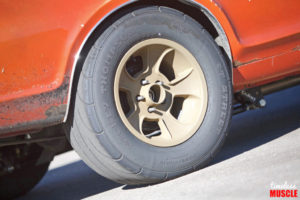 Of course, bringing this thing from a halt is another task as Baer SS4+ binders in the front replace the stock brakes, although drums still reside out back, with a Baer master cylinder providing the brakes with the fluid they need. The brakes are housed in an interesting set of rollers; Rocket Racing Launcher 15×4.5-inch in the front, and 15×8 Rocket Racing Injectors out back, wrapped in Mickey Thompson rubber.

The rest of the exterior is pretty much the way Andrew found it; patina, hole in the hood and shaved door handles included. Mr. Borodin tells us that the car was originally Frost Green, in fact, you can still see the original hue inside the trunk.

On the inside, it’s pretty much standard-issue ’67 Cougar, with the exception of the digital Holley gauge cluster that provides Andrew with all of the engine vitals needed to keep this rat rod functioning properly. The aforementioned B&M shifter handle looks right at him in the throwback interior, and there’s a fire extinguisher on-hand just in case. 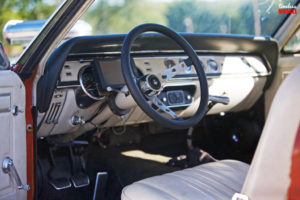 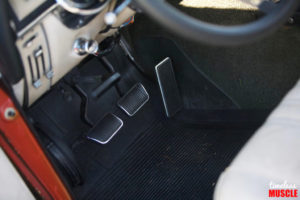 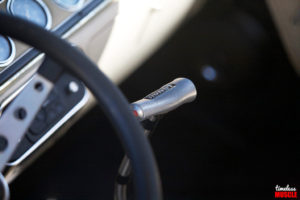 The result of all of Andrew’s efforts earned him nearly 325 hp to the rear tires and and 400-lb ft of torque to the tires, with Andrew himself handling all of the tuning duties. He also produced a 12.65 at 107 mph during a recent track outing.

For a homegrown, budget-builthot rod that breaks berries and challenges  new ideas, we think Mr. Borodin managed to build himself a fine automobile that could possibly start a new trend in hot rod muscle cars.