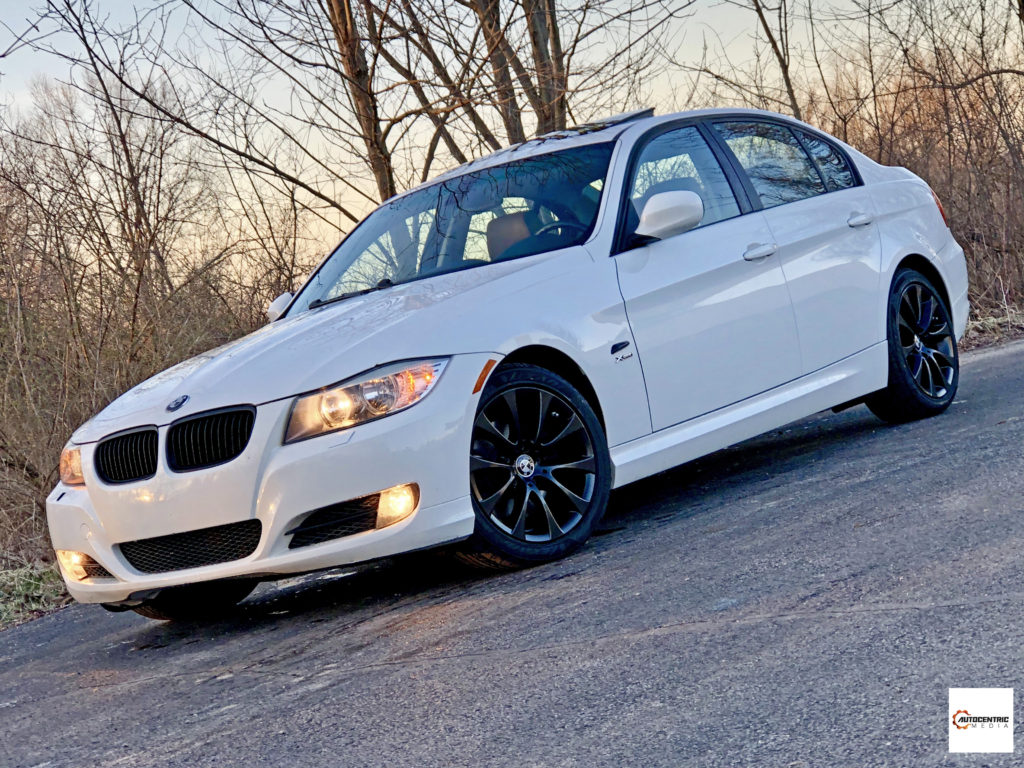 Adding Some Attitude to the Wife’s Grocery Getter

For those who may be veteran readers of this site, you may be used to us modifying and spotlighting vehicles that wear American badging on their flanks; from General Motors, to Ford and even the occasional Mopar, we have yet to dabble with anything from across the pond. Until now.

In recent months, your author’s spouse picked up a well-used BMW 3-Series as a second car, to be specific, a 2009 328i X-Drive with well over 100,000 miles on the odometer. After seeing yours truly have a selection of vehicles to drive and enjoy on a daily basis fro a number of years, the Missus wanted her own slice of the action, apparently.

If it were completely up to me, and if it were actually my money being used, I would have selected just about anything else for her, but she was insistent on a white, small, 4-door Bimmer with an automatic transmission — and for less than $6000. We ultimately ended up with the car you see here, after test-driving several very similar vehicles and almost giving up entirely.

Featuring all-wheel drive, it was perfect for all-weather driving here in the Midwest. The automatic gearbox makes the car easier to drive while she’s dealing with our two kids in the backseat, and it had literally all of the features she wanted — including heated seats, a sunroof and navigation. Just to be clear, if I were in the market for a Bimmer, I would have been looking at M3s or, at the very least, the twin-turbo 335i, but it wasn’t going to be my car. So I was charged in helping her shop and haggle… and wrench on the car when the occasion called for it. 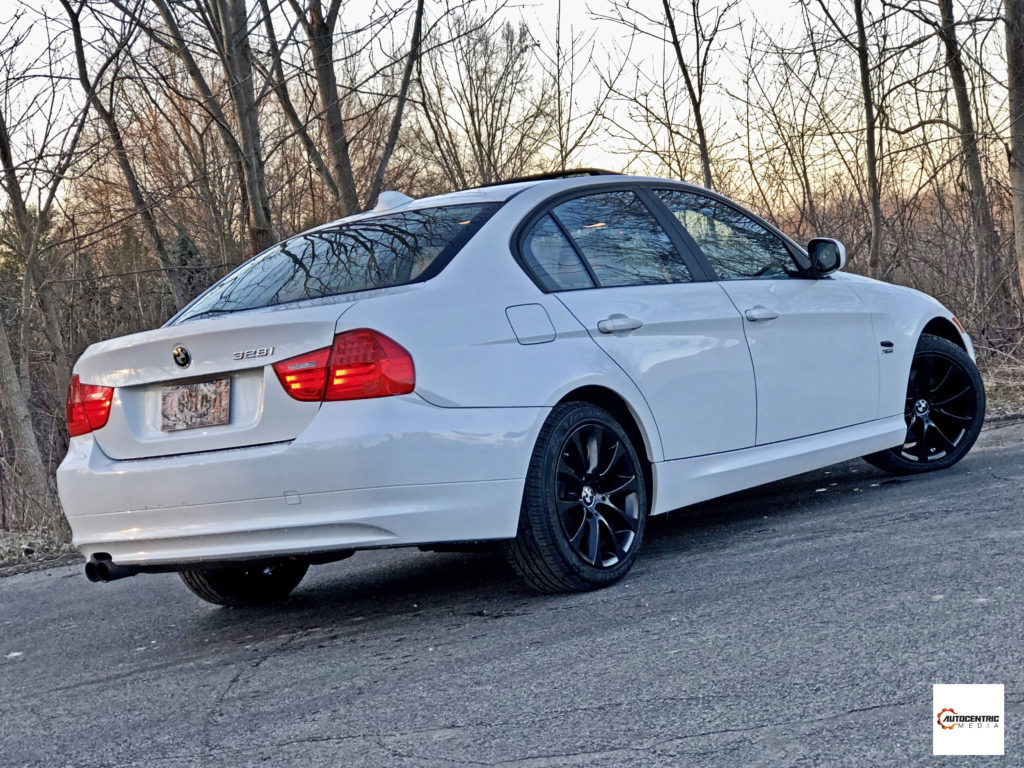 Under the hood, we’re looking at a 3-liter straight six engine that cranked out 230hp, which was impressive for what it is, for the time. Unfortunately the car left the factory naturally-aspirated, so if you’re trying to add power while on a budget, you have quite the hill to climb.

Fortunately, she’s not much of a lead foot, but since I’ll be driving the car from time to time, it only made sense that I ironed out a few details and made things more interesting. The good news was, the previous owner had already added a few touches that I would have; blacking out the grilles, emblems and installing black-painted BMW wheels from another model — so we were already halfway there. 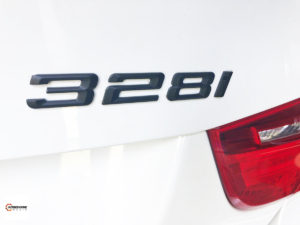 At a glance to the novice BMW buyer, the car appeared otherwise bone stock, until we realized that there was a three-stage intake manifold from a 330i under the hood (a popular upgrade among Bimmer aficionados) after we had already made it home with the car. Although it was clearly bolted-into place, the extra components to reap the benefits of said upgrade were MIA, so the fact that it was there really made no difference.

Allegedly, the seller knew nothing about it when we asked him after the fact. Obviously, we can cough up the few bucks to make it complete, but getting it tuned to reap the rewards is something else entirely. We may or may not make full-use of the intake at a later date, but for now, we wanted to do what we could on a minimal budget, using what was already there.

Looking up potential performance upgrades for this particular model was almost fruitless. Apart from the already-installed intake, available ignition components and cold-air kits, there seemed to be very little we could do in terms of bolt-on upgrades. In fact, there might only be one or two catback systems on the market for this car, entirely, but between the cost and whatever performance increase we would actually see, would more than likely not be very beneficial.

Again, we have no plans to install a high-flowing head, swap camshafts or add boost, so spending roughly $1000 to pick up maybe five horsepower doesn’t really make sense for us. Toss in the fact that this car has a ton of miles on it, and we’d have to rebuild the entire engine if we wanted it to make any kind of serious power — and that’s just not something I’m particularly interested in. I’d just as easily tear out the BMW drivetrain and swap in a GM LS V8 and a 6-speed manual, but that’s just me.

So we’re planning a small induction upgrade, some improved suspension hardware and maybe, getting the three stage intake fully-functional and pairing it with a tune, so it can earn its keep. For now, we’ve already done a full service on the car but we want to see what can be had for roughly $100 in upgrades — just to see what the budget-minded, novice enthusiast can grab off of the shelf and install themselves. 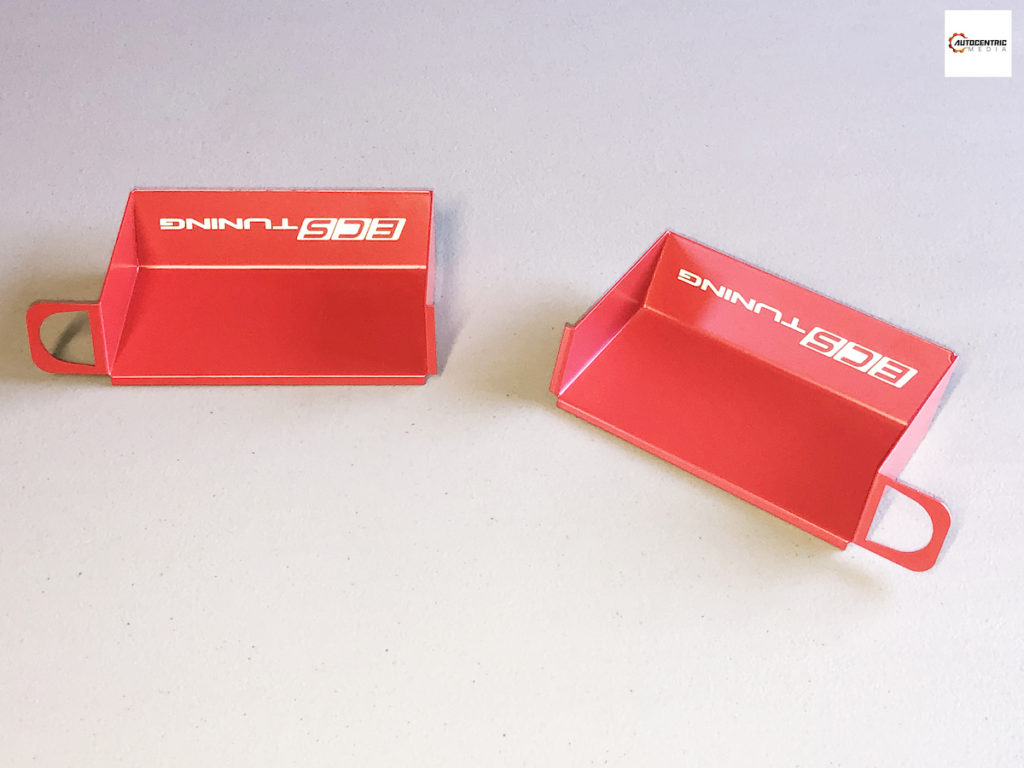 Browsing through several of the popular BMW tuner sites, including ECS Tuning, we’ve tailored the product search for our specific vehicle, and a pair of functional ram air scoops almost immediately popped up. Although we’re new to the Bimmer game, we have seen these scoops on various other European vehicles in the past. We thought they looked cool, give the car some “tuner attitude,” and if they actually helped feed incoming air into the intake system, all the better.

They retail for under $60 for the pair, and are shaped in a way that incoming air from the highway (or dragstrip, or road course) will be fed into the intake while you’re at speed. Obviously, installing these and looking for improved horsepower numbers on the chassis dyno would be pointless. We also insisted on implementing a high-flowing air filter element from K&N, since we’d be tinkering with that portion of the car, anyway. After we pulled out the dirty, stock paper air filter, it was probably for the best. 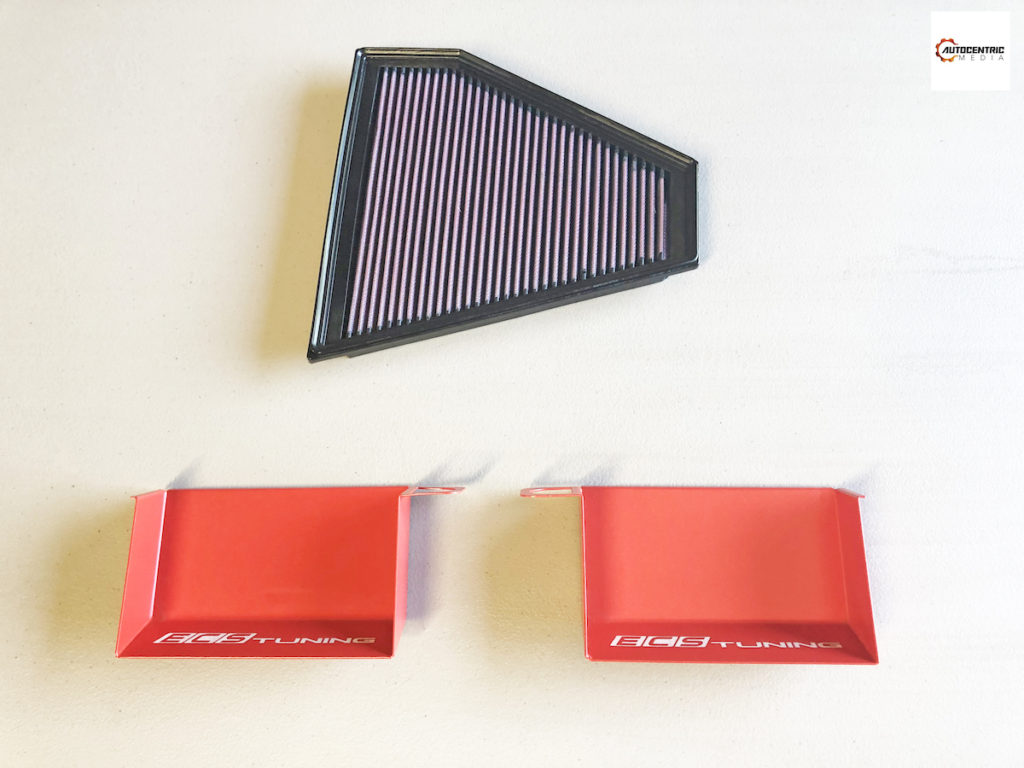 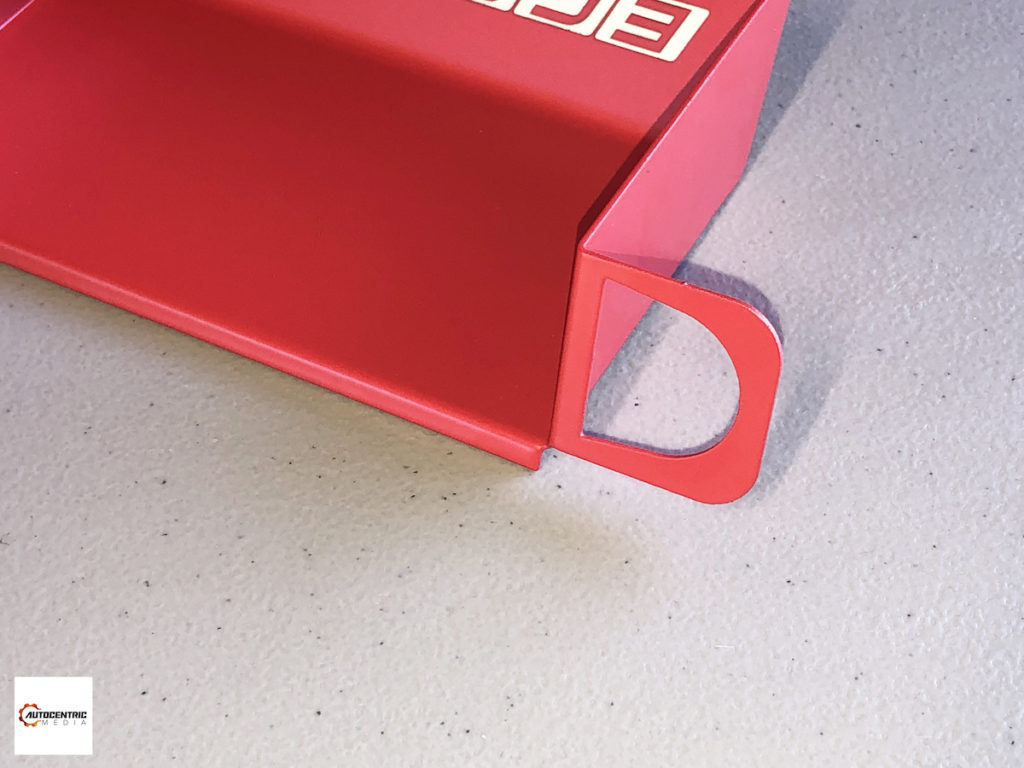 Generally, you can install these scoops very easily by popping out the air box and kidney grilles from the front of the car. However, when we picked up the Bimmer from the previous owner, the car had a few nicks and indentations in the front bumper, and he threw in an extra one he had laying around with the sale of the car. 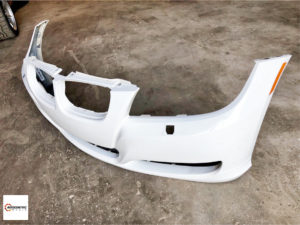 We also had an issue with a leaking headlight washer sprayer, which is tucked behind the bumper and was handled while the front fascia was off as well. So although you will see the install with the front bumper cover completely off, it’s not at all necessary for it here — it just made sense for us to do so while we were undertaking the other tasks.

The ECS Tuning Ram Air Scoops are available in your choice of black or red. Although we could have ordered the black ones, and have them concealed, I preferred the “flash” in this instance.

Installing the ram air scoops otherwise couldn’t have been easier; they simply install by sliding into the holes carved by BMW into the factory air ducting. To secure them in place, and to prevent them from rattling around, they secure the same way as the air ducting — with the factory pushpins from the top of the intake tube ducting. 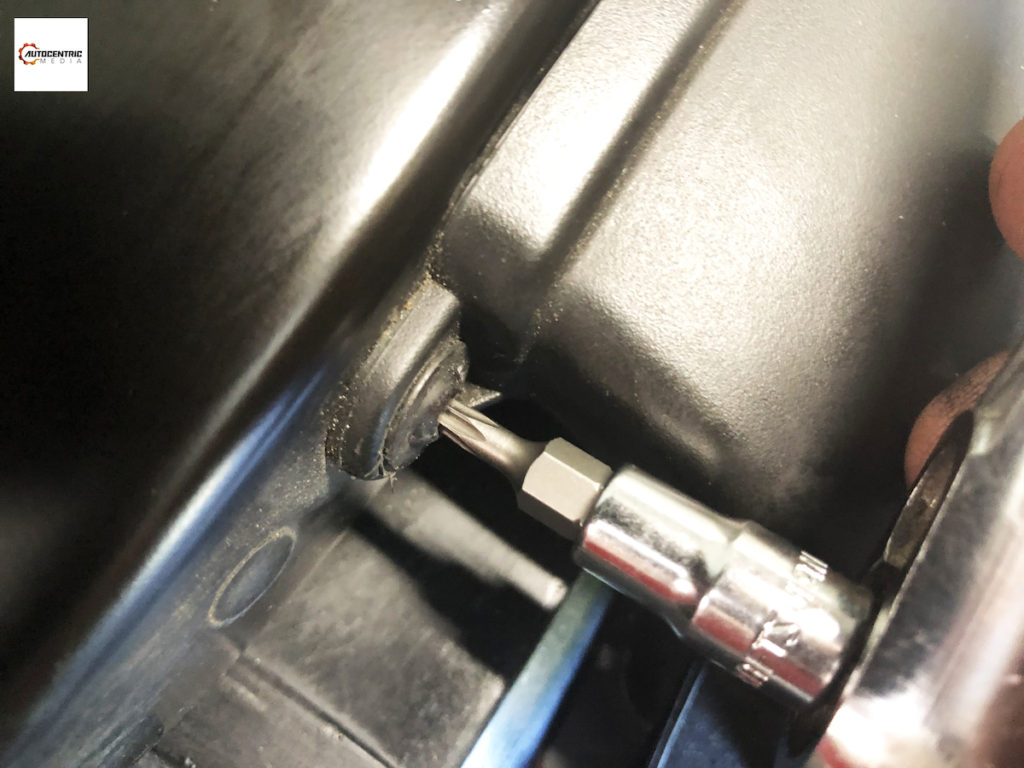 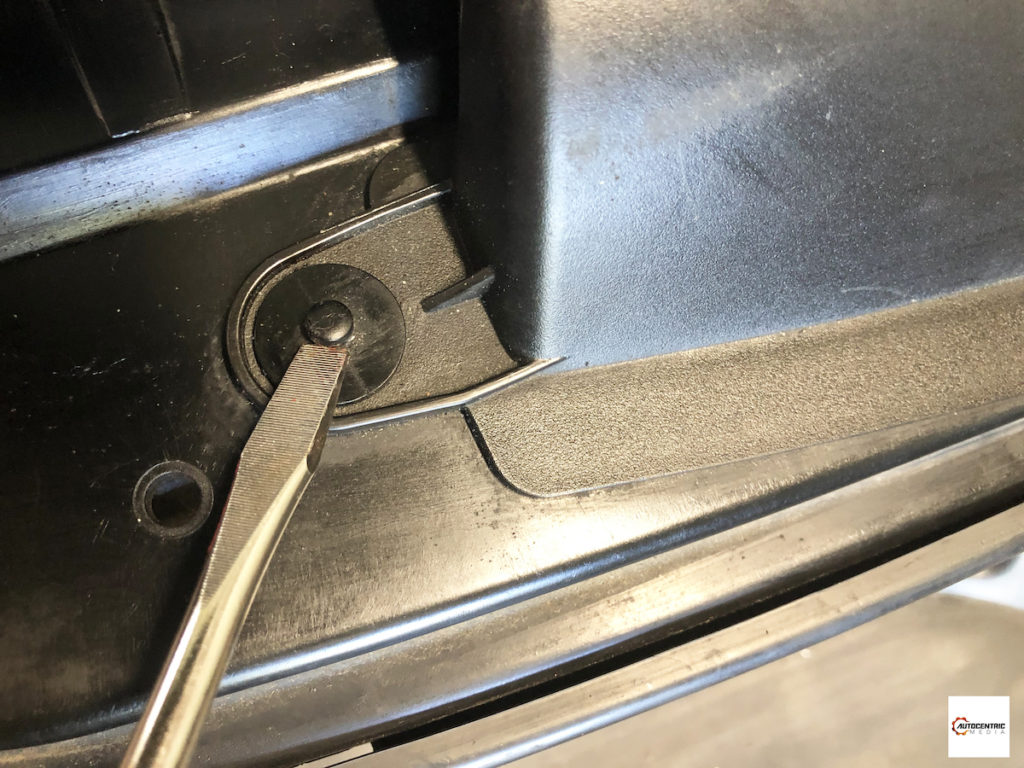 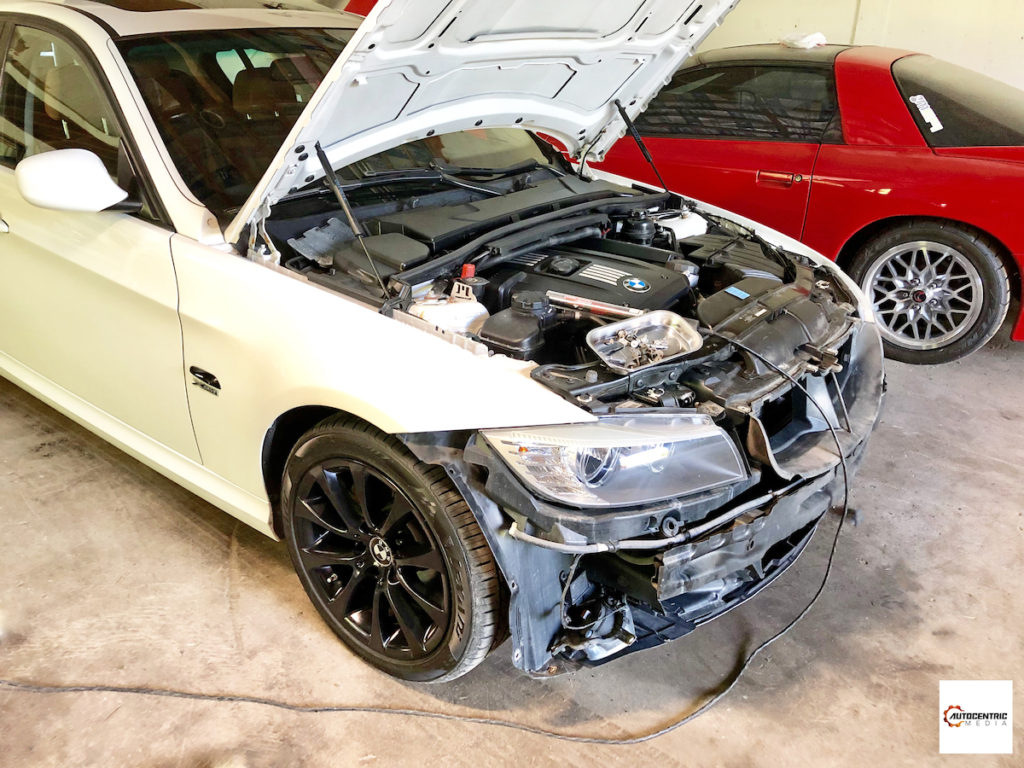 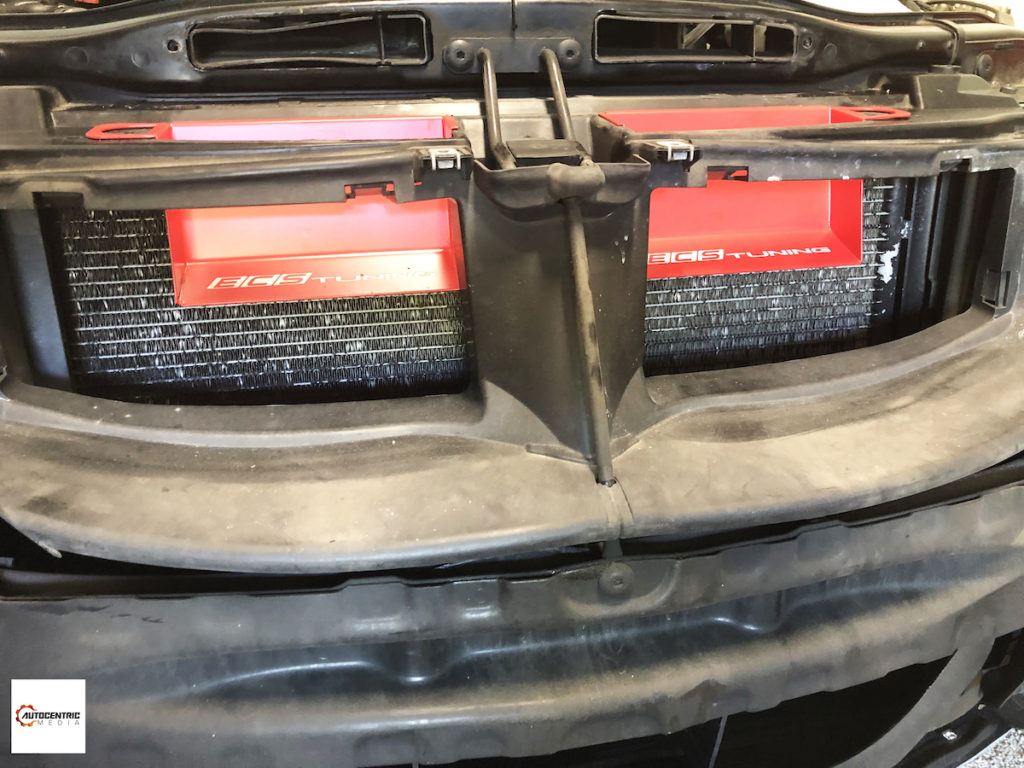 Naturally, the K&N filter is washable and reusable for 1,000,000 miles, according to our friends at K&N. They’re also known to be slightly less restrictive than OEM-type paper filters, letting additional airflow pass through without sacrificing the ability to keep debris out of the intake tract and ending up in your engine. 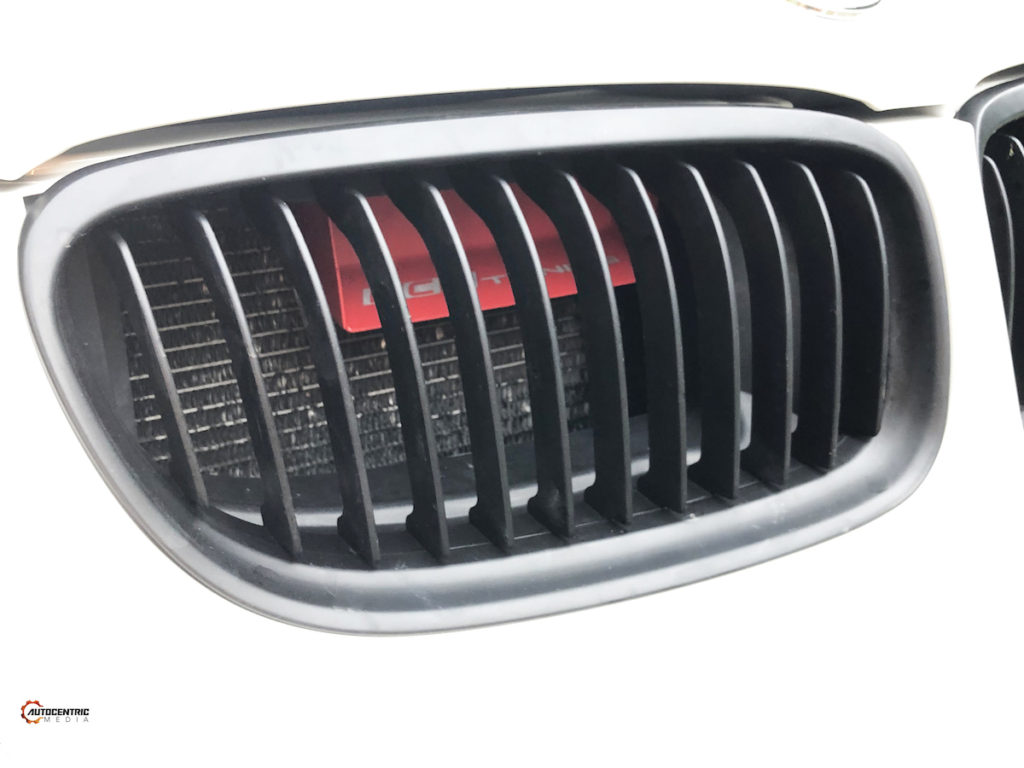 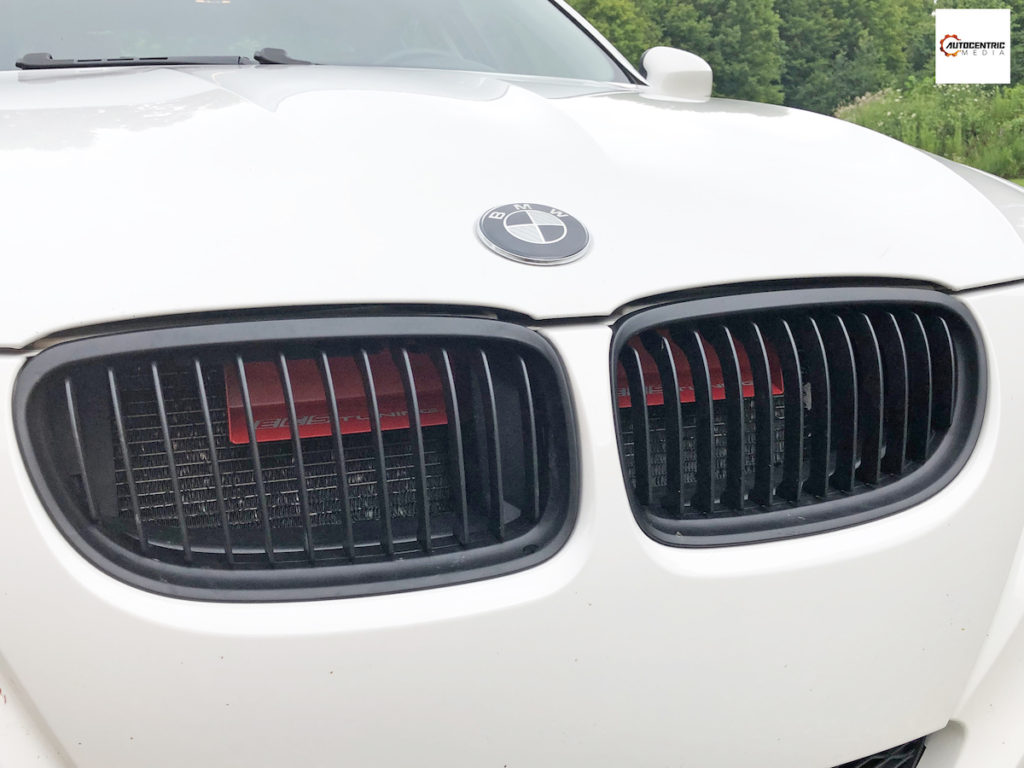 Although you may see a very minimal horsepower gain just by swapping out the filter, we’ve seen slight improvements in fuel mileage in other vehicles we’ve tested over the years, too. For maximum benefits, a cold-air induction kit with ECU using is highly-recommend, though not always necessary.

With the car all buttoned back up, it’s looking a lot better, and running well. While we had the bumper cover off and were switching the grilles and

lower “grille” section over, we took the liberty in respraying all five of those pieces in matte black.

The grilles looked fine prior to our install, but as is often the case, the lower section fade over time and were looking closer to grey upon closer inspection. We also swapped out the amber side reflectors and installed a set of matching place pieces that better tied-in the whole treatment together.

It may not be super-exciting, or add one once of performance to the car, but it looks cleaner and more presentable while on the family grind or running errands.

Stay tuned for the next installment, however, where we’ll be upgrading the car’s front suspension with some hardware from Whiteline Performance. Until next time! 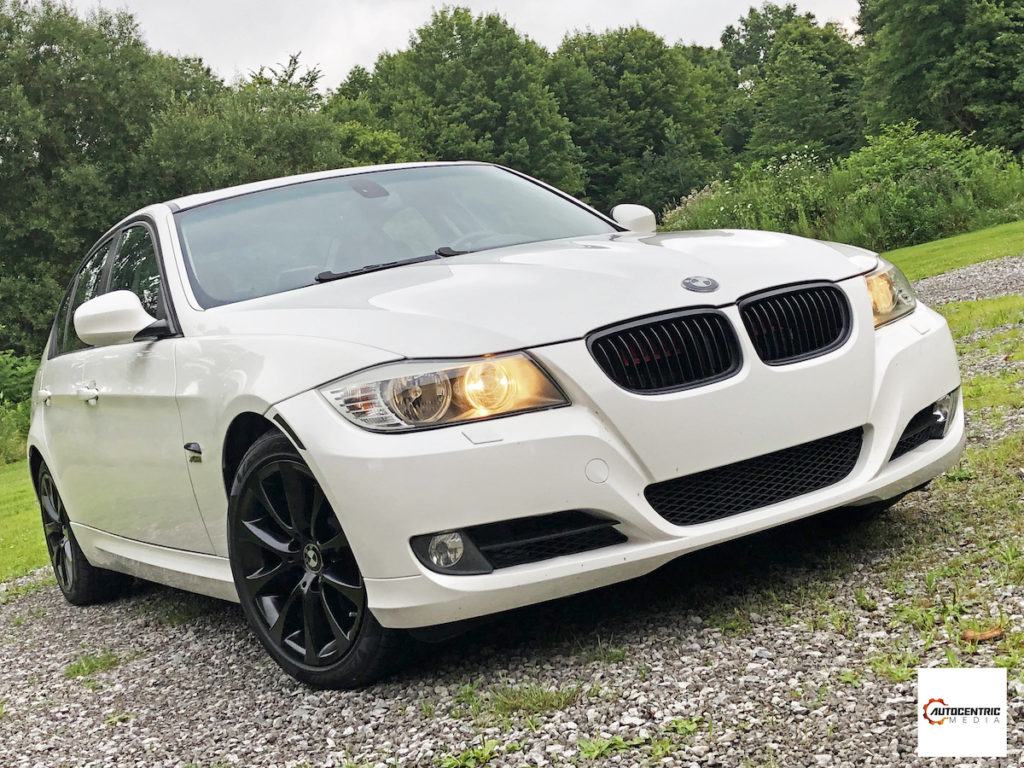