Paint and BodyPaint And BodyPhoenixProjectsTECH

It’s been a little while since we’ve last brought you an update on our 2002 Trans Am WS6 project, but we’re finally getting caught up and we av quite a few of them for you; from a Toyo Tire upgrade, to something from GTOG8TA.com and a few pieces from 6LE Designs. Kicking things off with 6LE, we wanted to focus on giving our Phoenix a cosmetic update – it’s in dire need of one!

The car as it looks today is exactly how it looked since 2004; the black ZR-1 wheels, lowered stance, tinted windows, etc. However, it’s been over 12 years since the last changes have been made and they’re long overdue. We wanted to do something different and out of the box. Working closely with 6LE over the last several months has provided us with a “think different” approach that we live by. Lucky for us, they had quite the selection of hardware up their sleeves!

In this special two-part story, we’re going to install 6LE’s recently released Q-Splitter and billet aluminum hood hinges, the latter being first. One of the few qualms we’ve always had with these fourth-gen F-bodies were their hydraulic hood shocks. They work as they should, holding the hood up without the use of an archaic hood prop rod, but they also get in the way rather often, look out of place and more often than not, fail as they age. You can chalk it up partly to the engine’s mounting position in the engine bay and the location of the shock mounts themselves, but we’ve found ourselves trying to work around them numerous times over the last decade and a half.

The timing couldn’t have been more perfect, because 6LE’s hood hinges offer the perfect solution. What they do, is mount using three existing holes on each side; one onto the top portion of the factory hood hinge, and two on the inner fender mounting holes, just below the hood hinge. So what we’re going to do is show you just how easy it is to install these hinges in just under an hour.

Hydraulic shocks have the tendency to wear and loose their strength overtime. Plus on the 4th-gen F-bodies, they can be rather unsightly and in the way of doing certain kinds of maintenance and engine work. So we’ll be yanking them! 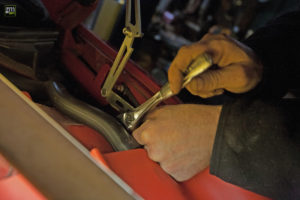 There are a total of three mounting points on each hood each, totaling six. 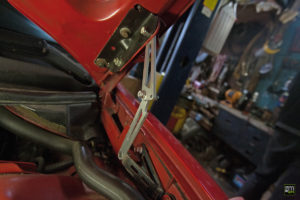 The two bottom bolts are carried over from General Motors, while the top one is included with the hinges. If you choose, you can paint the base of the hinges painted to match the car’s body color. 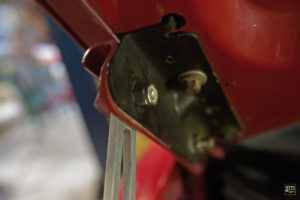 The included nuts attached to the allenheaded bolt that attached the hinge to the factory mounting post. 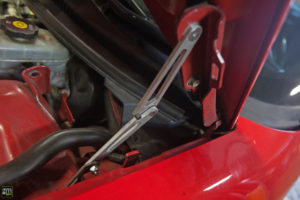 The hinges provide a modern, clean look that also saves weight from the factory shocks. 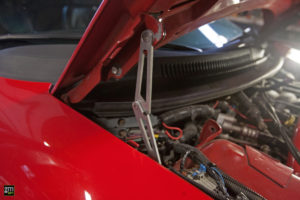 The hinge “locks” in place, thanks to the locking nub molded into the hinge.

We left the factory hood shocks in place throughout the installation as support for the hood. With the billet hinges in place we were able to disconnect and remove their hydraulic counterparts.

And here they are, holding up the hood and looking great! It operates just like the factory setup, only difference is, you have to lift up on the hood slightly to release them. It provides an incredibly modern look that will set yours apart from others in your area. These are also available for ’93-02 Camaros (obviously, 2010-2015 Camaros and 2008-2009 G8s.