If you’ve ever watched the reality show, Street Outlaws, then this car probably looks familiar to you. That’s because it is indeed, the Cutlass aka, The Cutty, from the prime time TV show. Owned by Andrade (full name withheld), this ’82 Cutlass in ’84 Hurst/Olds livery (nope, not a real H/O), has an interesting story all its own.

But let’s back up a minute, because in order to make sense of what we’re looking at, we have to go back to the hows, whens and whys that Mr. Andrade first acquired it. Rewind the clocks almost twenty months ago, and Andrade was sitting on the couch watching TV, when he receives a phone call from Justin “Big Chief” Shearer asking if he wanted to be on “the show.”

Very interested in getting in on the action, Andrade was quick to say, “sure,” but there was a slight problem; he didn’t even have a car. Having just very recently (at the time) sold another project, Andrade quickly went in search of a G-body specifically, simply because of his love for the GM two-door intermediates, as he tells us. He finally settled on this ’82 Olds you’re looking at here.

To add more drama to his situation, he had to build The Cutty – and fast – as the producers were gearing up for filming of the next episode and were eager to get him and the car involved. That meant he had, get this, a week to build the car – and they pulled it off! In fact, he tells us the first time he had ever driven the car, at all, was when he entered a street race with the cameras rolling for the Discovery Channel.

Needless to say, the car managed to win three races in a row that evening, which Andrade says, helped make a name for himself and his family overnight – it was his most memorable moment with the car so far, he shares. Not bad for a 7-day homegrown thrashing!

At this point, you’re probably wondering what the heck is under the hood of the beast, and we’re more than happy to tell you… what we can. Because of obvious technicalities of being attached to the TV show and not to mention, his friendly rivals, Mr. Andrade was a little elusive on some of the key details of his car, but we’ve brought you everything we were able to in order to give you at least a taste of this car!

Under the hood, you guessed it, is an LSx. No, not an actual LSX, but a LS1-based 408 cubic-inch stroker built by Texas Speed and Performance, with a bit of boost swirling through it. To be more technical, it sports a forged bottom-end featuring Wiseco hardware, a “secret” custom-ground COMP camshaft and is topped off with PRC 225 CNC-ported cylinder heads. Just a simple, reliable, tout and potent long-block.

Andrade’s Cutty is also packing an RCI Billet Runner intake manifold that breathes in air and distributes the oxygen evenly and efficiently to each of the eight firing cylinders. With a 10.5:1 compression ratio on hand, the 408 mill is lubricated by a stock-type oiling system with an Milodon 8-quart oil pan while an upgraded fuel system that includes Big Stuff 3 injectors and Aeromotive components  pumping fuel into the engine. 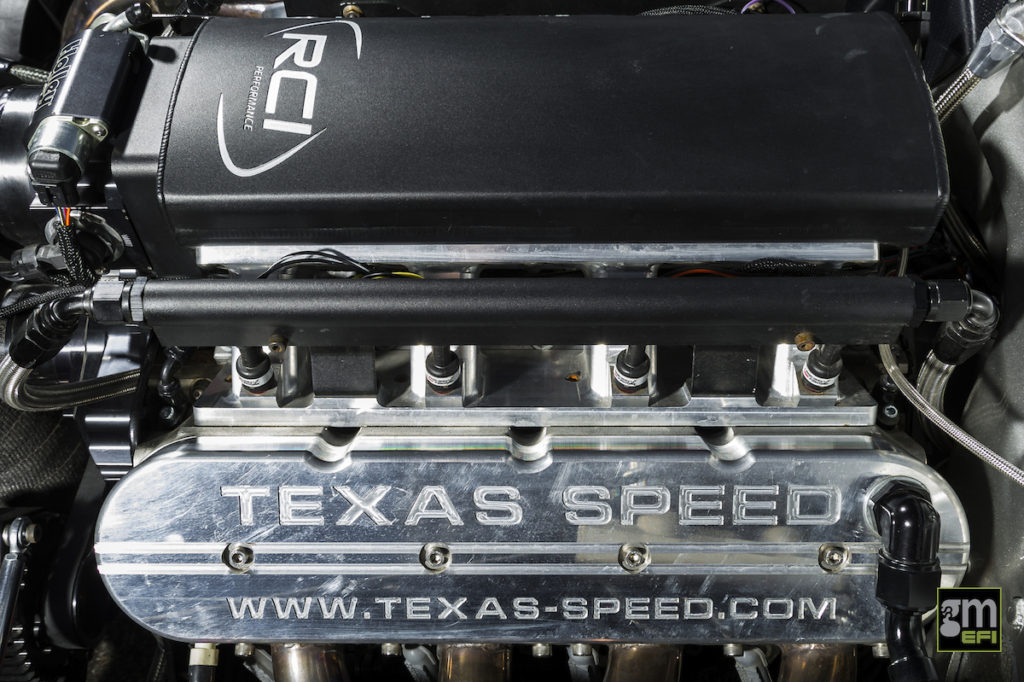 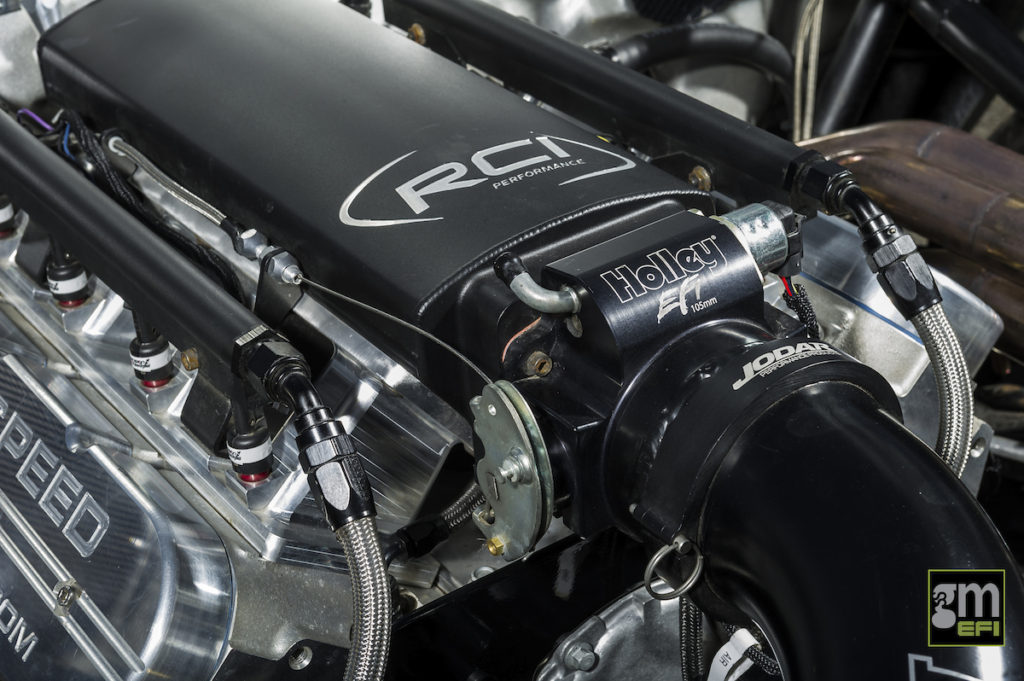 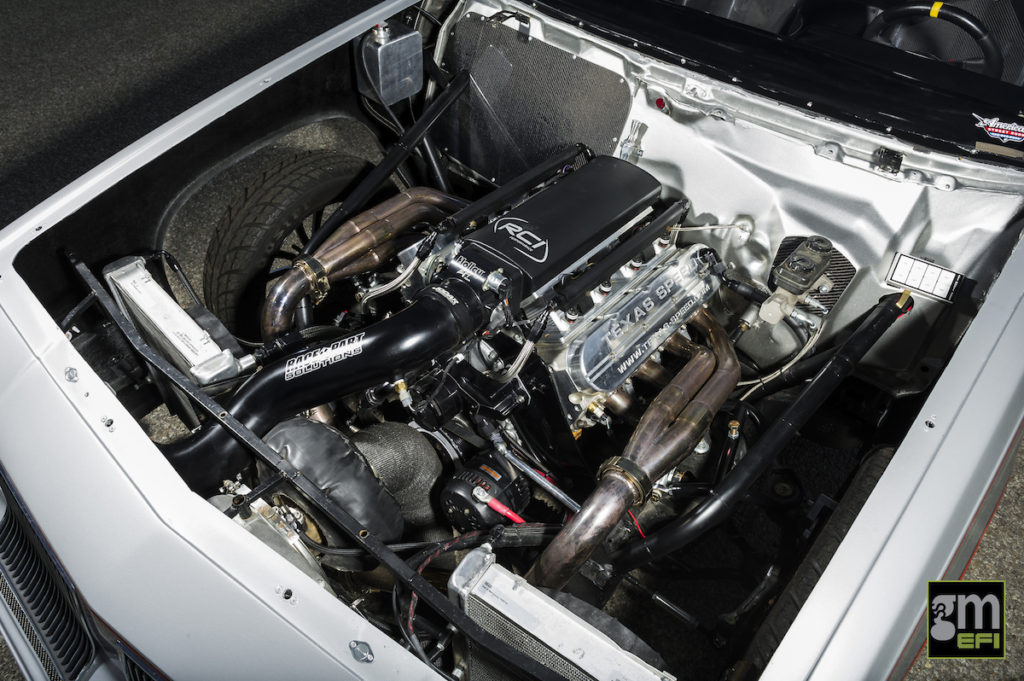 But the real power maker? That’s the Forced Inductions GT55 94mm V3 turbocharging spooling up a very impressive and power-punching  27-psi.  – not too shabby. Expelling the spent turbocharged fumes are a pair of American Street Rods 3-inch diameter headers feeding through a muffler-less 5-inch diameter exhaust.

Power output? Can’t say – although we’re confident Andrade is aware, he wasn’t willing to share that. However, if you do the simple arithmetic involved with his combination, we would have to guess that number is substantially higher than 1,000 whp. It is a turbocharged 408 LS1 with 27-psi., after all. 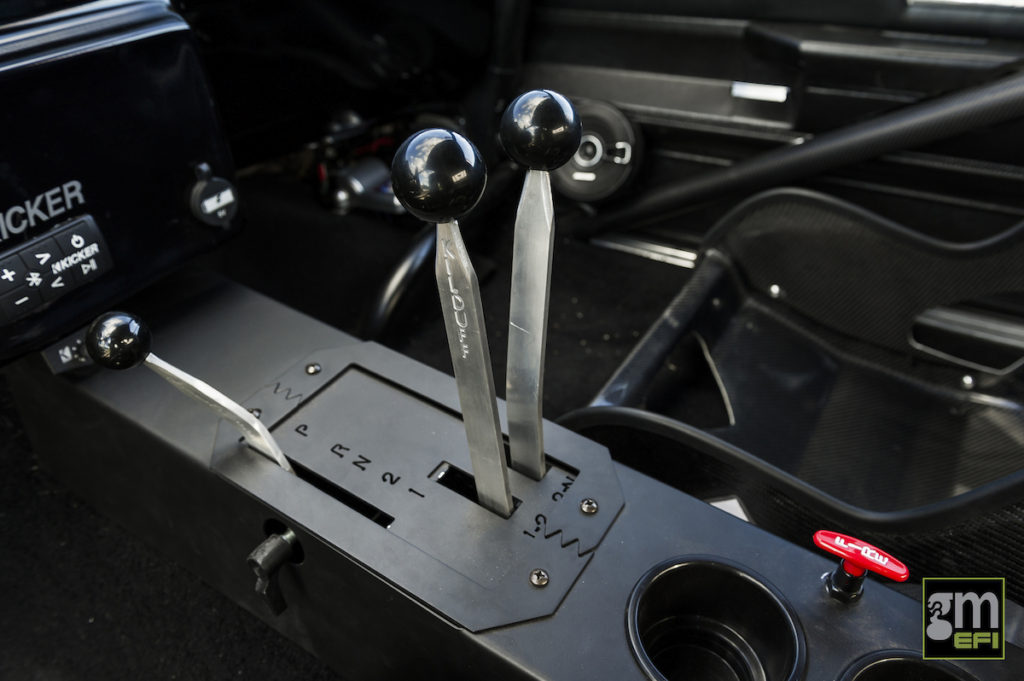 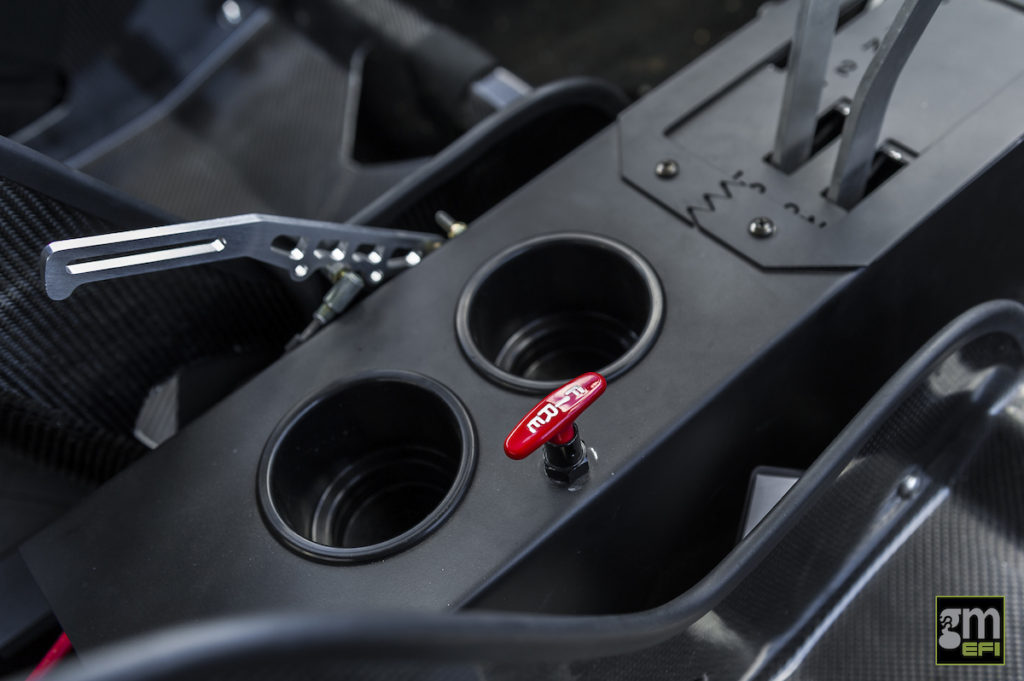 Backing the monstrous powerplant is a PTC-built Powerglide, bellhousing a PTC 4500-stall rpm converter. It feeds through a steel driveshaft and into a Moser Engineering rear axle stuffed with 35-spline axles, 4.33 gears and a full spool – all assembled by American Street Rods.

With all of that going on, you would be nuts to think that the hardware keeping The Cutty glued to the ground is OEM. Underneath, The Cutty utilizes QA1 shocks and springs at all four corners. There’s also a set of QA1 adjustable A-arms in the front as well, while Aeroforce binders bring this boosted beast to a halt in quick order. 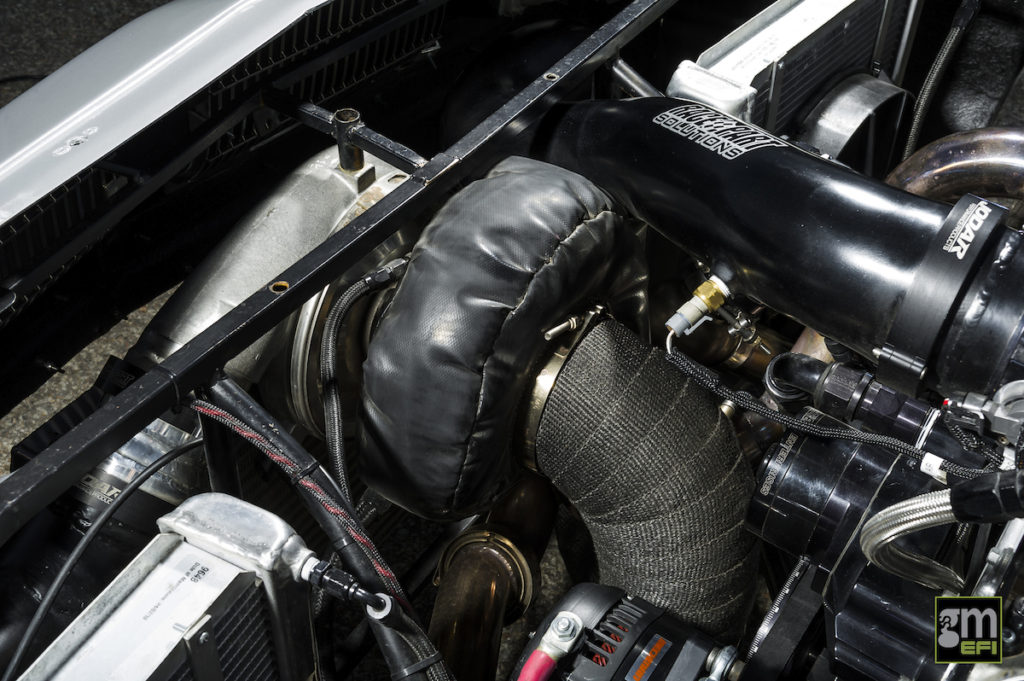 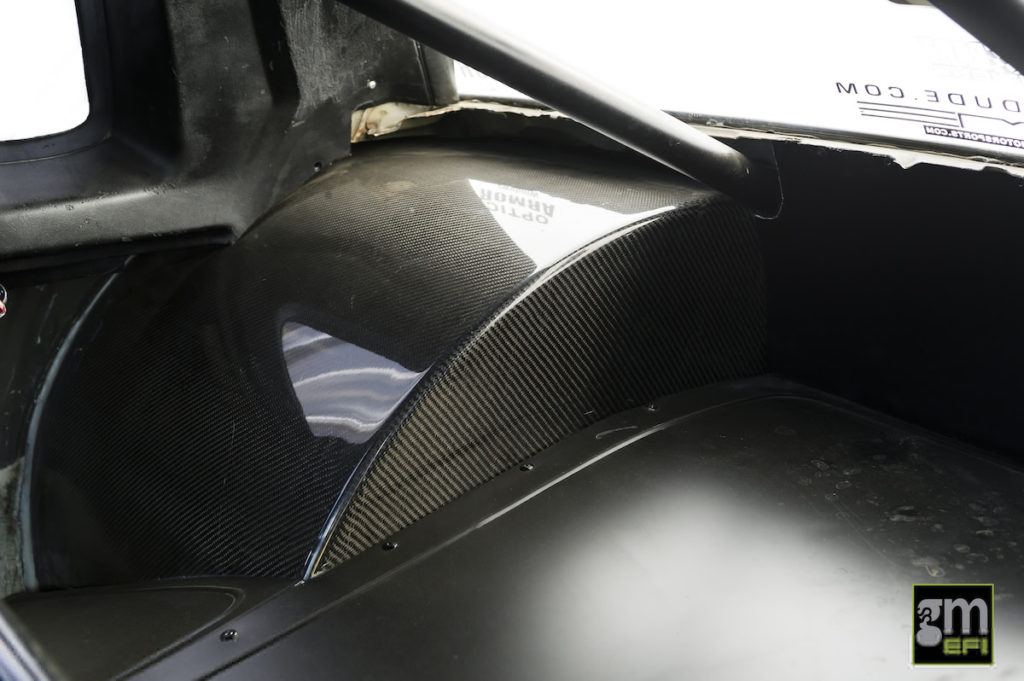 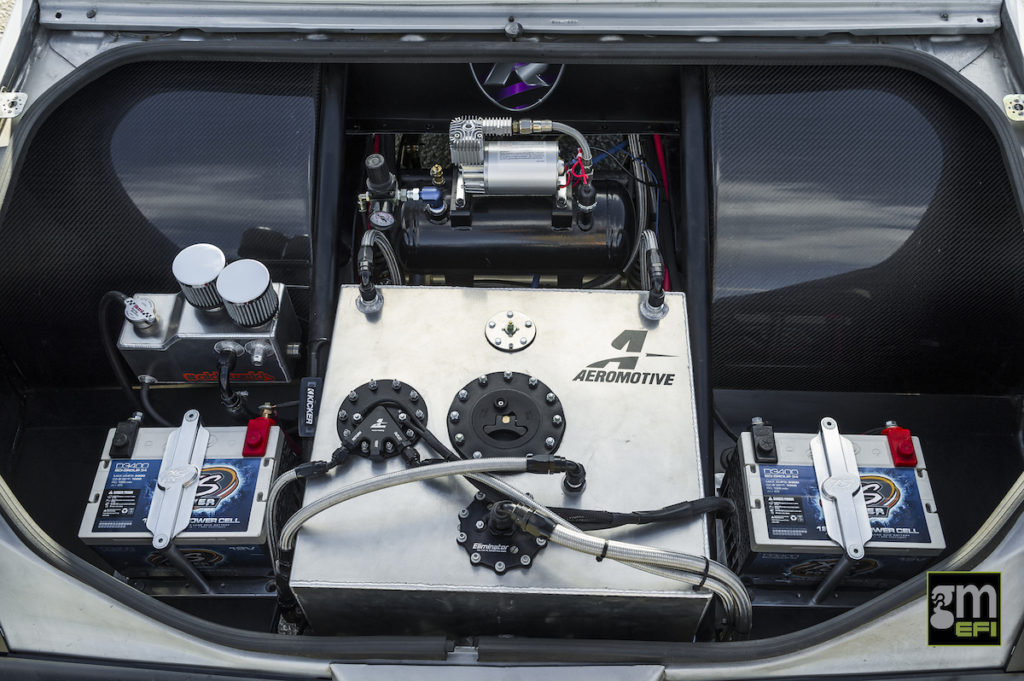 All of the suspension tuning in the world doesn’t mean anything unless you have the right rolling stock; in terms of booth lightweight wheels and grippy rubber. Weld Racing V-series wheels wrapped in Hoosier slicks and skinnies answered Andrade’s request, keeping his Olds G-body gripping the surface , allowing him to become very competitive in his street battles… and what’s a street warrior without a wheelie bar and a parachute – just in case?

Then there’s the styling. Of course there is some confusion about the aesthetics of the car, with millions of fans all over the globe thinking that this is a legit Hurst/Olds. Although it isn’t, some of you purists can sleep easier at night, while those overall G-body/Olds fans out there can bask in the glory that a “Hurst/Olds [homage]” is kicking @$$ and taking names! 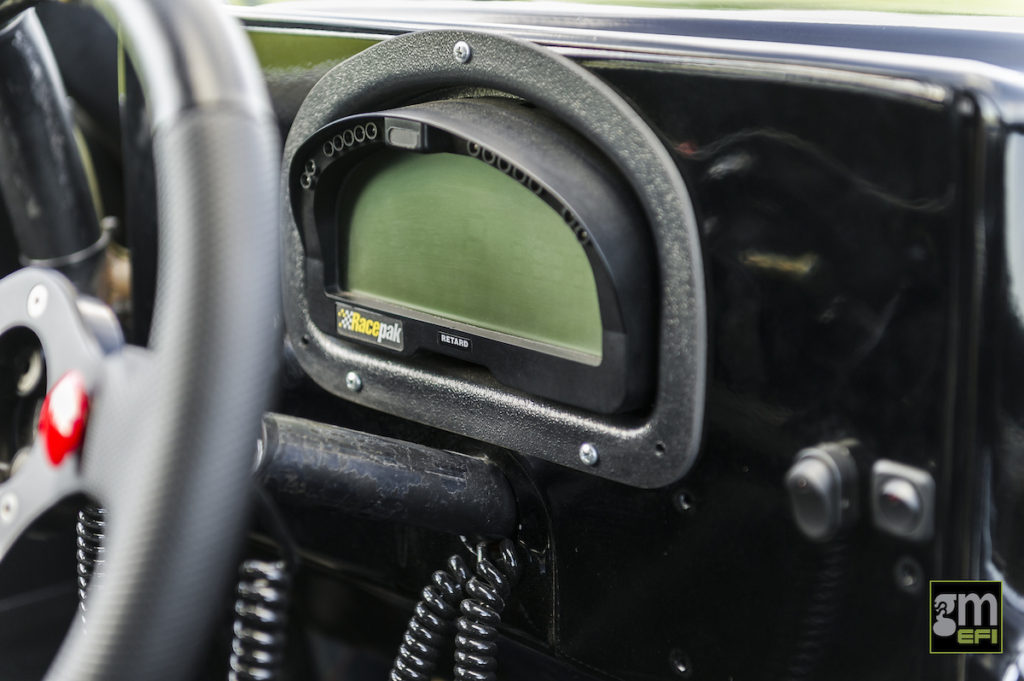 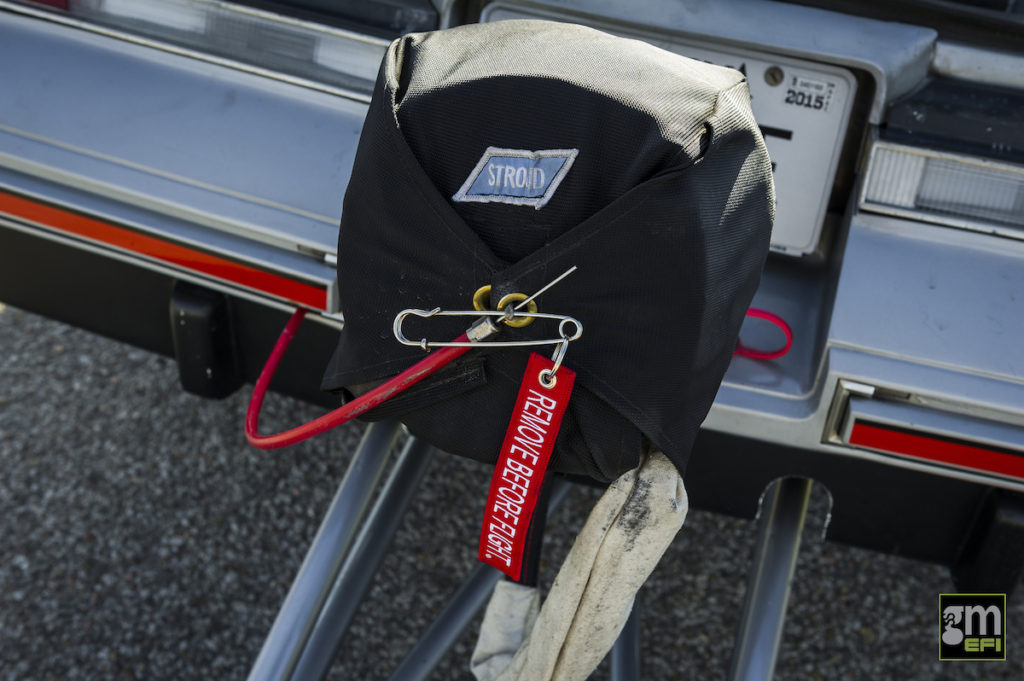 Andrade specifically credits Brian Weaver and his crew at Gbody Parts for the entire interior trim and many exterior details, such as the grilles and taillights for the car’s rather appealing demeanor.

“What’s unique about my car,” he informs, “is that it has stock-appearing paint and all of the work was done by myself, [with the help of] my friends and family. It wasn’t sent off to a shop with an open checkbook. I think most people can relate to that – we have to work on a budget. I definitely want to give credit to Randy of he show for helping me with the back half kit, as well as Josh and the whole crew for hammering out the install in a single day.”

He shares that as much as he wanted to keep it a “small-tire car,” he had to back-half The Cutty to”keep up with the Jones.'” With a killer combination already in place, we feel that he would have still been able to hold his own, regardless. Nice work, Andrade.