Car Feature: A Sky Redline with a Corvette Heart 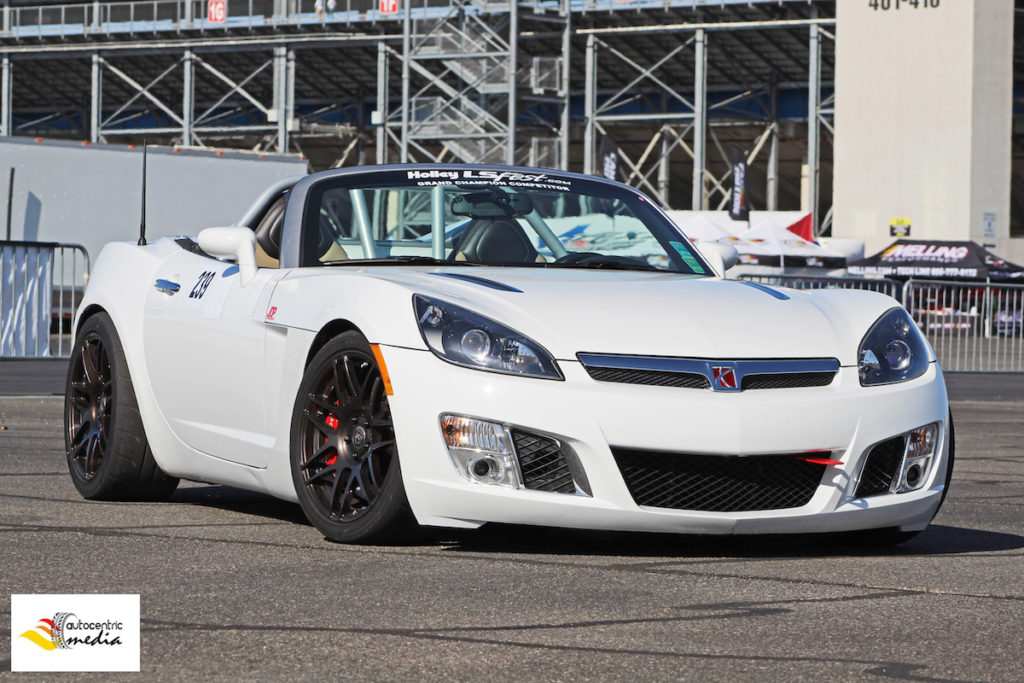 Back in the mid-2000s, the automotive landscape was quickly changing. Performance was on the rise, but hybrid cars were becoming increasingly more interesting to the masses, while GM was getting low on funds. Wanting to create some excitement throughout all of their brands, they had elected to put an emphasis on performance.

This took many forms, including offering a pair of Kappa-platformed sports cars through Pontiac and Saturn. Utilizing a parts bin of components, including a rear differential from a CTS and an available 5-speed gearbox from a Colorado, this allowed GM to sell the Pontiac Solstice and Saturn Sky at a modest price.

Of course, with having guys like Bob Lutz around, 177hp from the base model just wasn’t enough. GM Performance Division stepped in and beefed up the suspension, and replaced the 2.4L I-4 for a 2-liter turbocharged Ecotec with 260hp. With a few tweaks and some tuning, you can really wake those boosted mini mills up. Naturally, some people want even more… 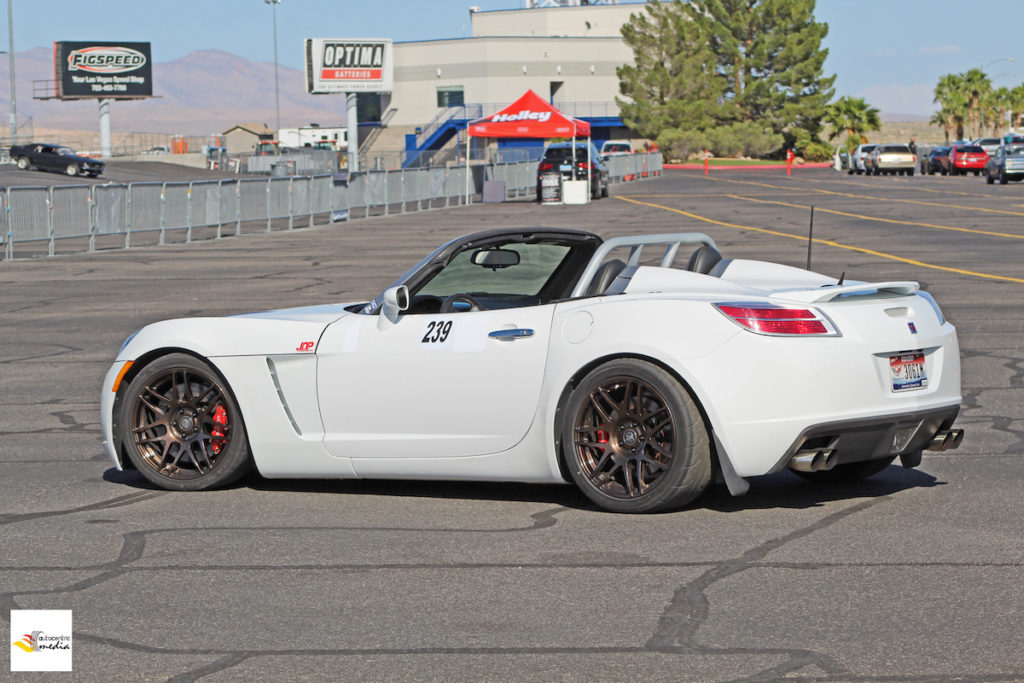 It was known back then, that a small-block V8 would squeeze between the fenders of the Kappa cars, but The General never got around to putting one into production before the car’s plugged was pulled. That’s where the aftermarket comes in today.

GM’s LS and LT engines are the lightest and most compact engines out there — you can pretty much fit them into anything. The Kappa cars are no exception, so when we spotted this one at this year’s LS Fest West, we stopped in our tracks and had to take a closer look.

As it turned out, it’s owned by Dana Barlow, and it’s a car we first caught onto from our friends at JDP Motorsports, who built the car. With less than 13,000 miles on the clock, the Sky Redline would go under the knife at the JDP facility. Working directly with Jordan Priestley, JDP’s founder and owner, they would build a car that would crank out north of 500hp, but would be perfectly suited to the autocross. 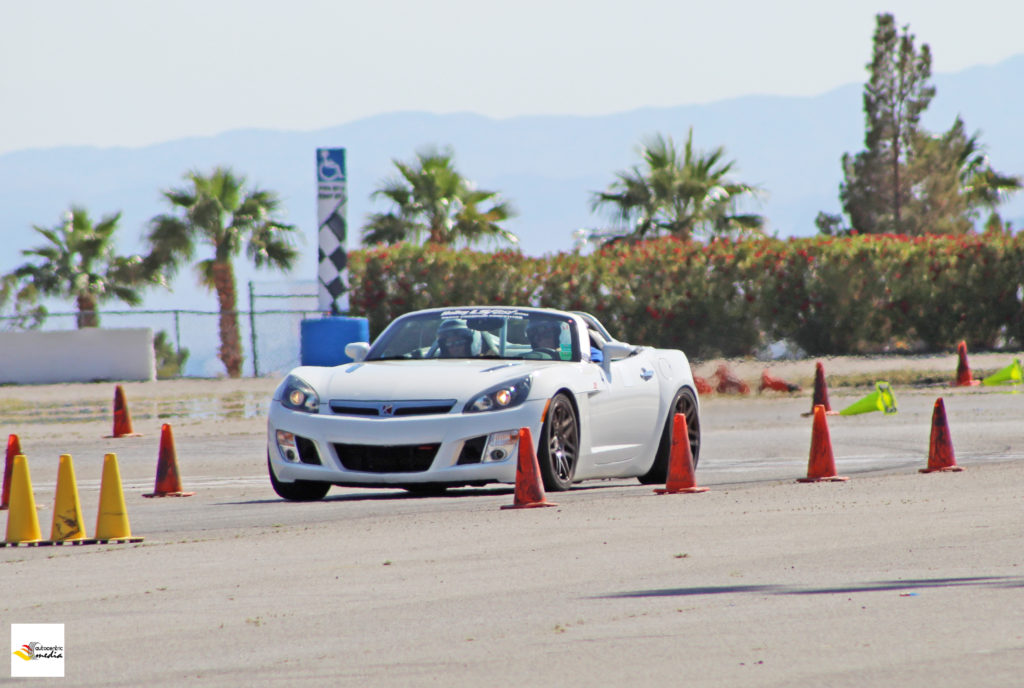 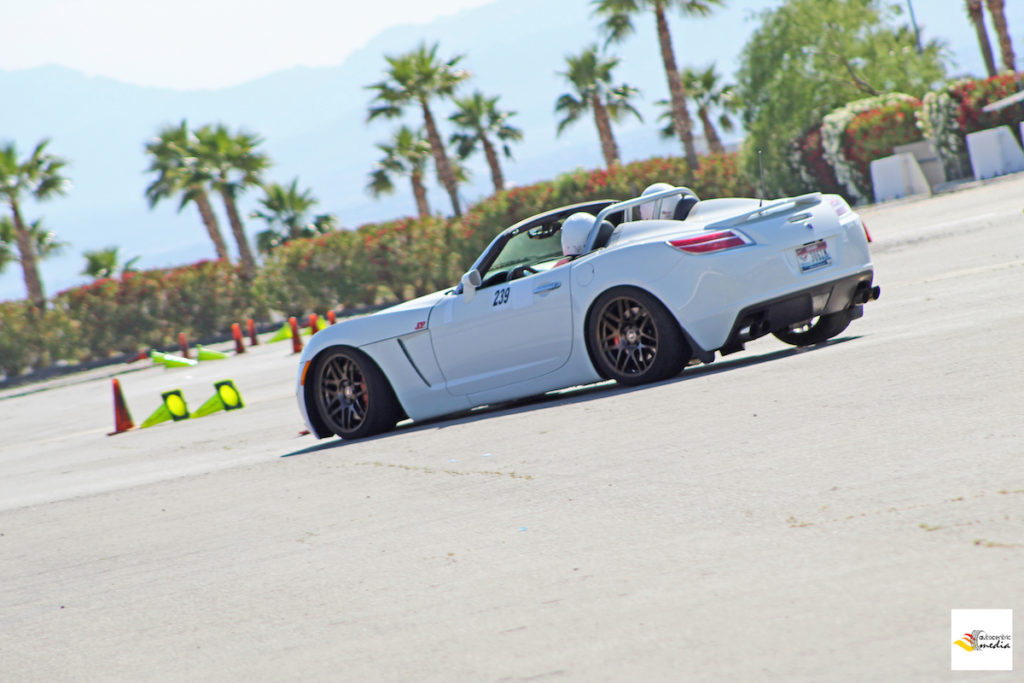 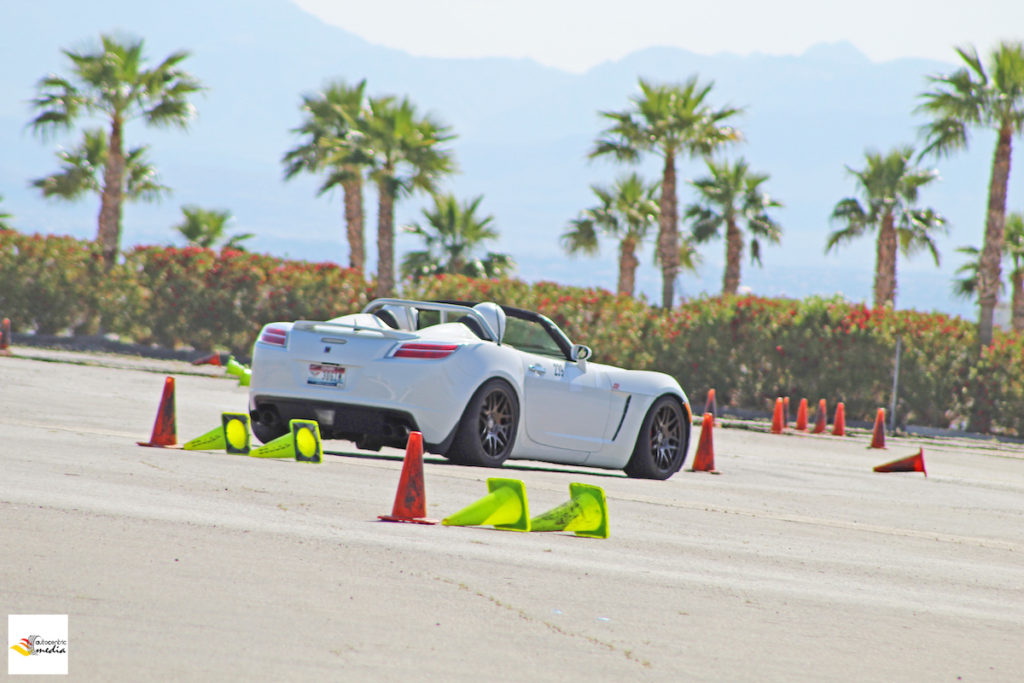 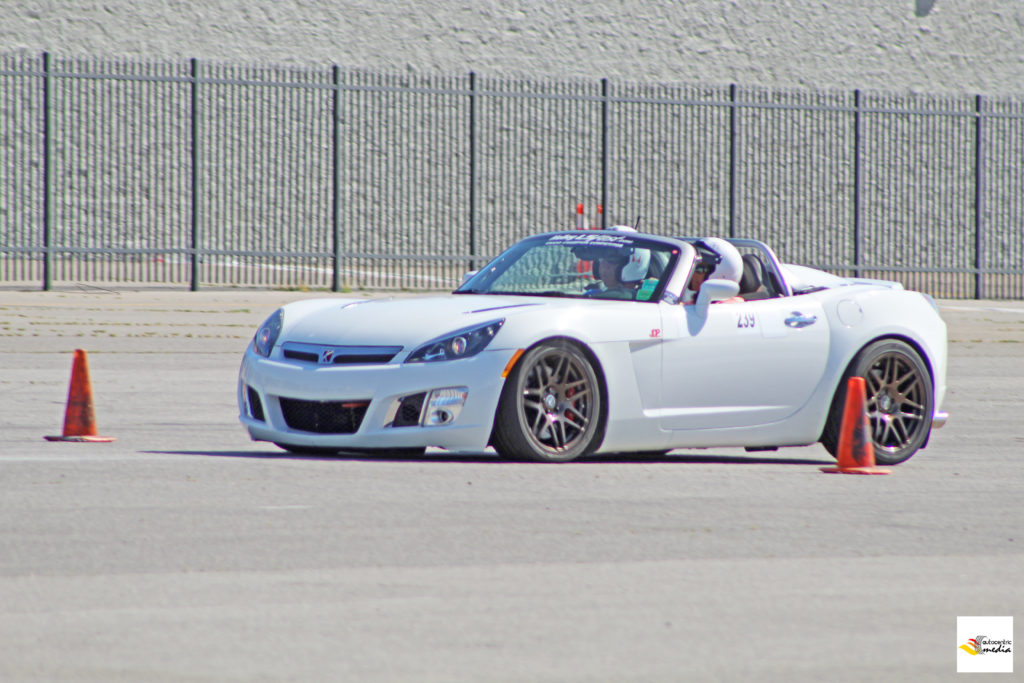 Starting with the obvious, a stock bottom end LS3 with a JDP custom-grind camshaft was dropped in between the fenderwells. The heads were modified with Brian Tooley Racing valvesprings, with an OEM LS3 intake manifold sitting between the pair. An Airaid C6 cold-air induction kit and stock LS3 throttle body feeds air into the engine.

Sitting behind the hopped-up LS3, is a Tremec TR6060 with a Centerforce clutch and flywheel. Dana shifts it, via, an MGW shifter. A Driveshaft Shop 4-inch diameter piece sends the power from the Tremec gearbox to the 3.91 geared rearend. 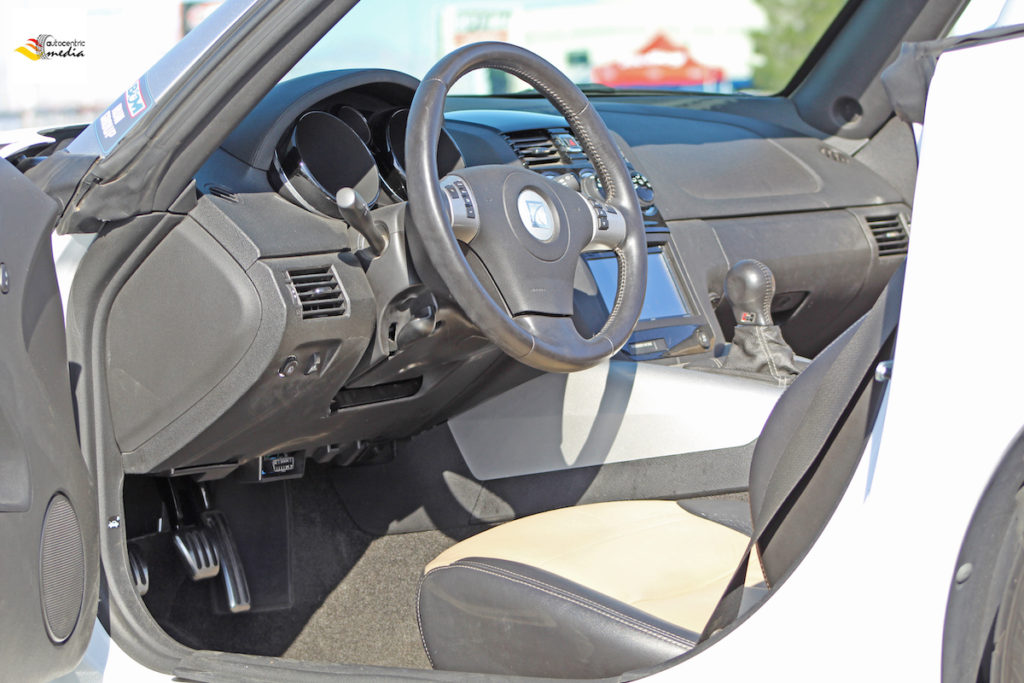 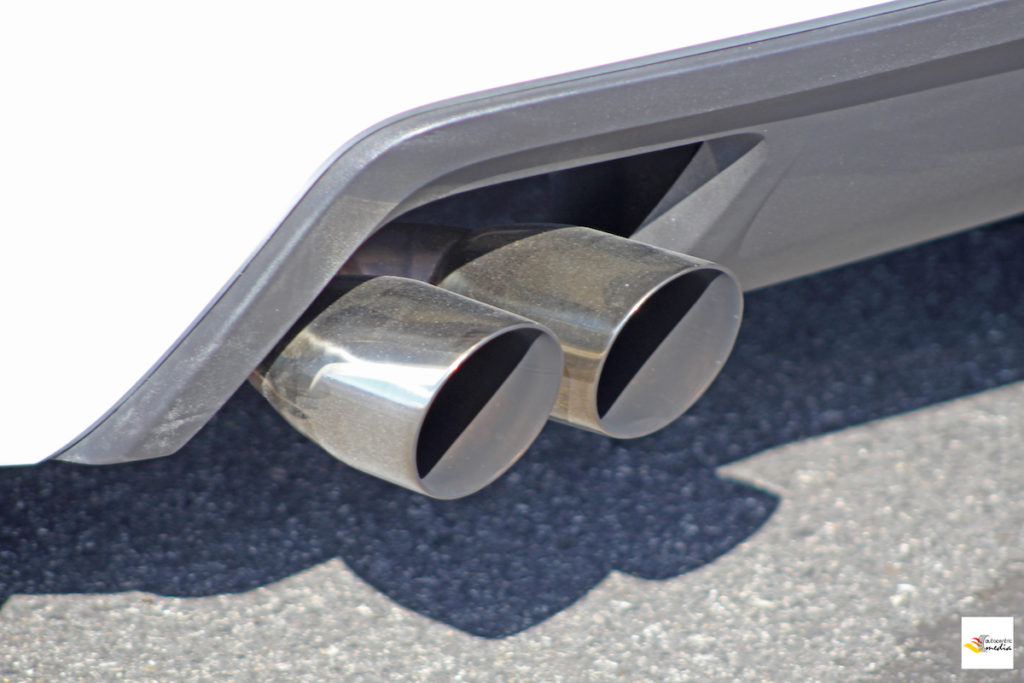 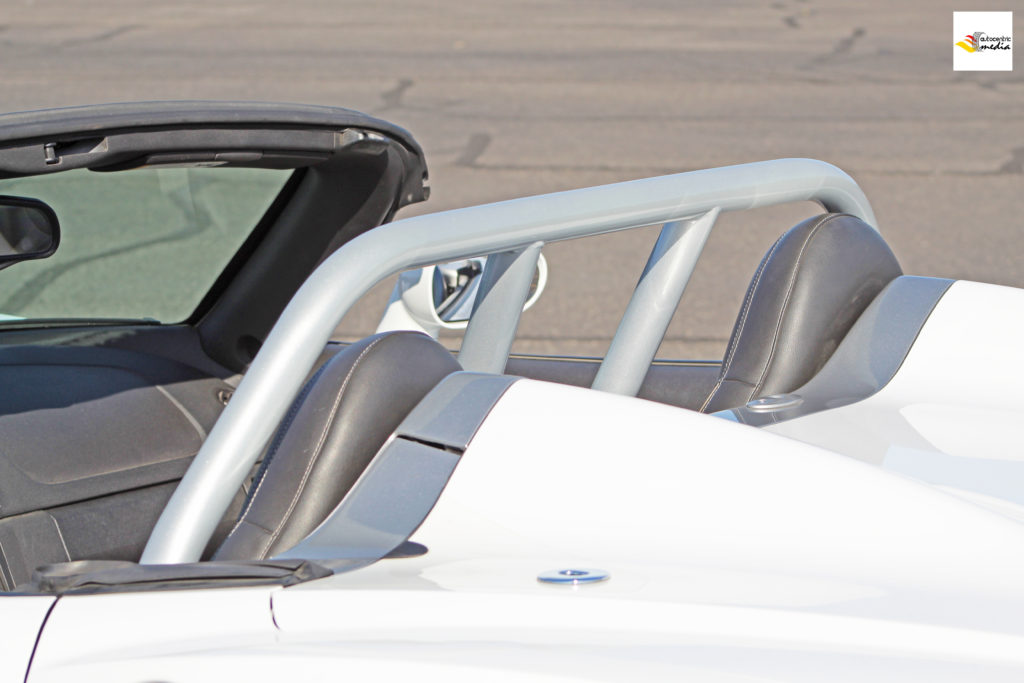 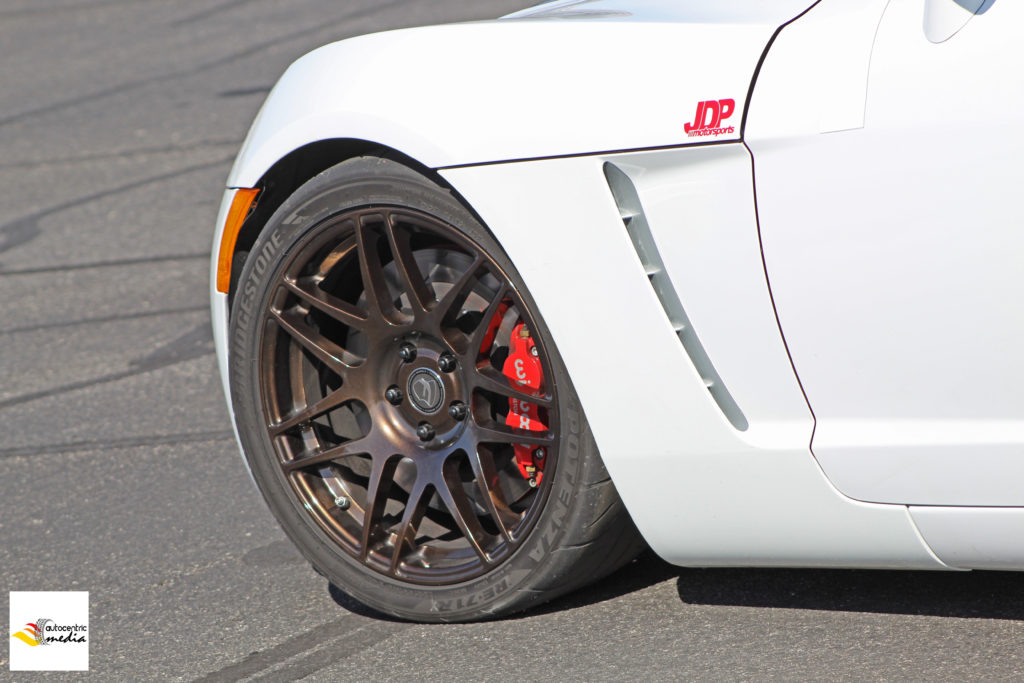 The exhaust system has been modified front to back. Performance Autowerks headers maximize the LS3’s potential, with the help of a MagnaFlow Tru-X x-pipe and mufflers. Two-point-five inch diameter tubing round out the exhaust upgrades, and they provide a soundtrack that makes you do a double take, if you didn’t already know what was under the hood.

Underneath, DDM Works front and rear sway bars and DDM bushings, HyperCo front and rear springs, a set of Penske 8300 double-adjustable shocks with JDP custom chassis mounts are the aftermarket components in the suspension. Stock front and rear upper and lower control arms are the only remaining pieces that are still in place from the factory.

If an autocross car is going to be a serious contender, bigger brakes need to be a part of the equation. The stock Redline brakes were adequate, for a stock Sky on the daily commute. But they simply wouldn’t do with twice the horsepower on tap and with the serious driving that Dana had in mind for her car. 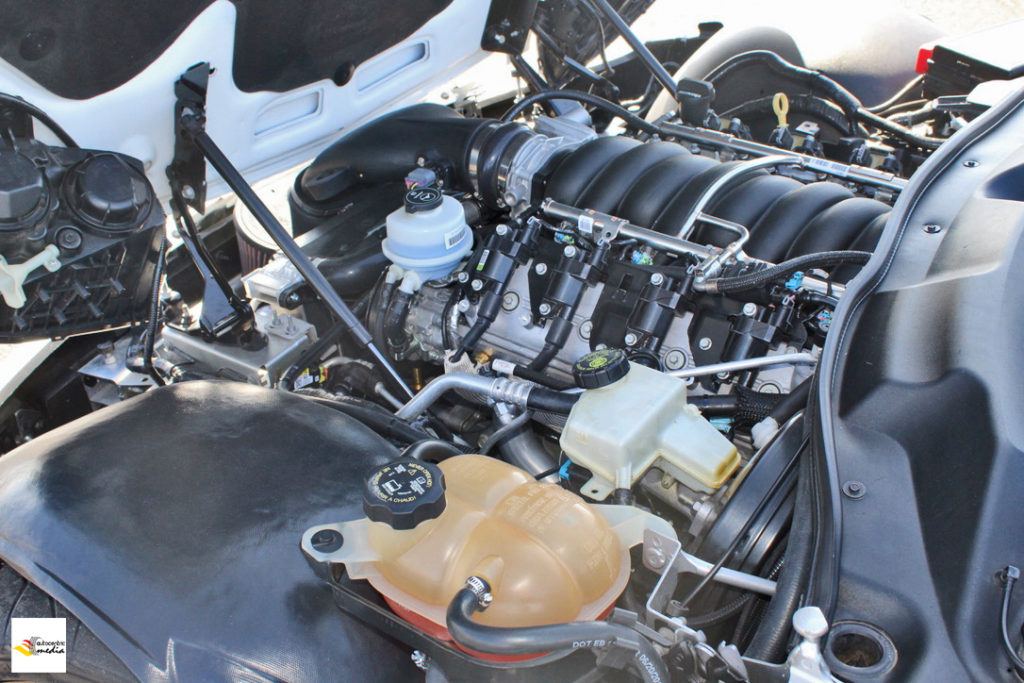 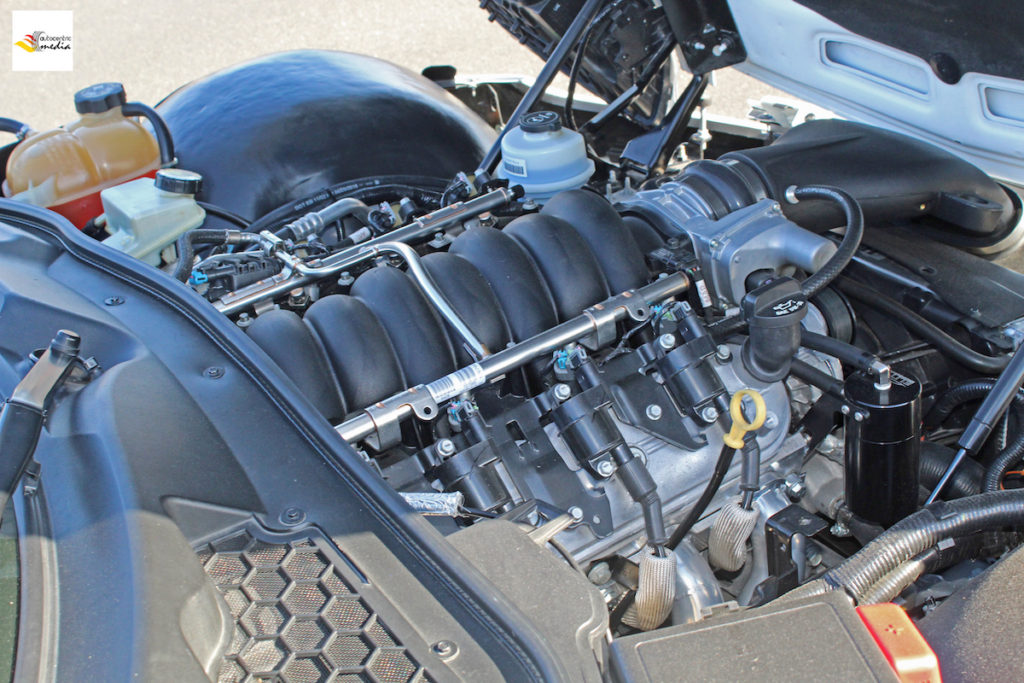 That’s why Wilwood 14-inch 6-piston (front), 13-inch 4-piston (rear) brakes went into place — they provide the binding power Dana needs for the Sky, and helps with keeping the car competitive on the track. They’re tucked nicely behind the 18-inch Forgestar F14 wheels, in bronze, that are wrapped in Bridgestone RE71R rubber.

Rounding out the list of mods is a RPM Motorsports 4-point Kappa roll bar, mounted in the cockpit for additional roll over safety and chassis rigidity. The onboard audio has been updated with a JVC head unit, featuring Apple CarPlay, Bluetooth and a back-up camera.

Dana is part of a racing family; with her children having a dirt bike and motorcars background, and her husband, Jade, once being active in RZR racing. After an unfortunate accident with the RZR, a friend of the family invited them out to some Utah-based SCCA events back in 2014, and they were instantly hooked. As Dana tells us, she was smitten form the get-go and it would finally be her turn behind the wheel.

With their heart initially set on a Corvette, they decided to take a path less-traveled and build something rather unique. The result, is what you see on this page. We think she succeeded, and is very thankful for the entire crew at JDP Motorsports for building her the car.

Dana would also like to thank DDM Works, Performance Autowerks, Discount Tire, Price Body and Paint, RD Automotive, Shane Hawkins, Car-Fi, Utah Head Turners and Jon Wayment for all of their help along the way, and for their continued support. 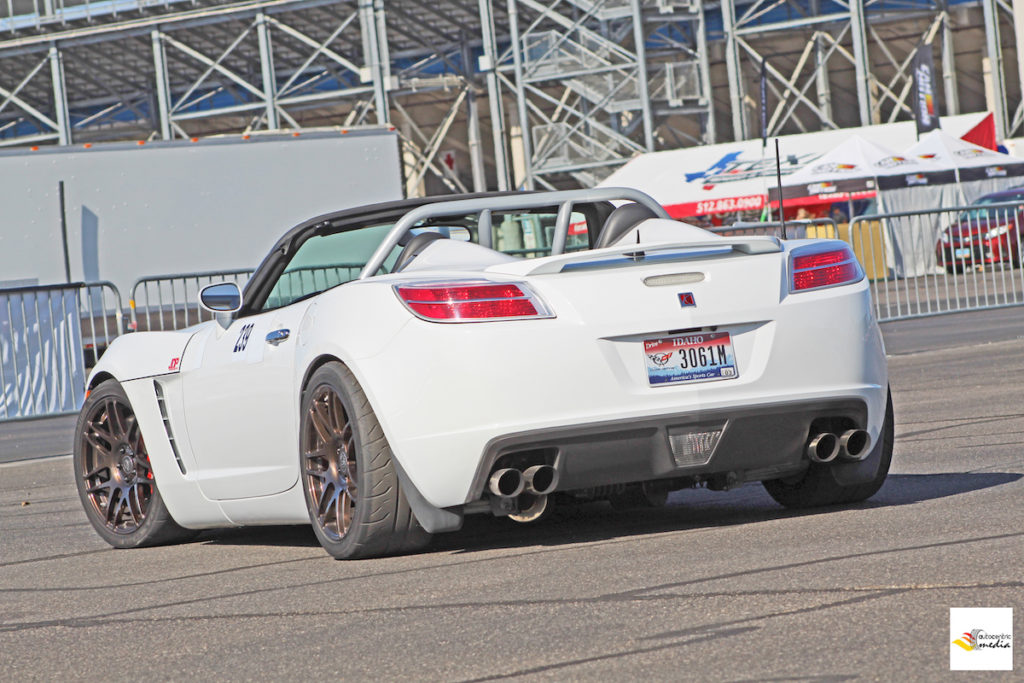