Car Feature: Flight of the Falcon

photography by: the author

This Little Falcon Takes the Term, Sleeper, to Another Level!

We know what you’e thinking: this 11-second Falcon looks like more like a barn find or a little old lady’s car than a capable drag strip competitor. That’s just how the Shaws like it. The little green ’62 Falcon sure doesn’t look like a muscle car. From its dog dish-covered steel wheels to the beige bench seat and stock steering wheel, it looks like a nice survivor more than a drag car. Oh sure, there are a few clues here and there, but you’d have to know where to look.

Even when it idles past, the exhaust note doesn’t give the car away. There’s no snotty huge cam/hollow muffler V-8 rumble. There’s no blower whine. No aural clue what’s going on with the minty-green car that looks perfectly suited to a conservative grandparent.

You might not even notice it at a car show or even at the drag strip. No wild graphics or booming stereo exist to grab your attention. The car’s owner, Stacy Shaw, likes it that way. She affectionately calls the car a real, “Driving Miss Daisy” experience.

So, why is it here in a muscle car magazine? You knew there’d be more to this story …and you were correct.

The car’s body has not been altered at all — it’s pure ’62 Falcon. Everything remains in fine shape, and the Shaws keep “Lil’ Squirt” shiny and clean all the time.

Stacy is married to Nathan Shaw, the driven madman behind the growing “One Guy’s Garage” enterprise in the Twin Cities region of Minnesota. Known for his impeccably fabricated twin-turbo/E85 setups for GM LS-series engines, Nate’s own ’71 Nova is a fixture at local street car drags, regularly running deep into the 8-second range while remaining a reliable street driver. When Stacy said she wanted a car of her own, Nate was all about it. She wanted a small, American classic.

Her first choice was an early (’62-’65) Chevy II, but the escalating prices meant the buy-in would blow out the budget. After seeing a nicely-built early Falcon, the decision was made. Nice Falcons are still reasonably priced and it didn’t take long (like a single day after making the decision to get a Falcon) to find a clean example on the local Craigslist site. The original 6-cylinder drivetrain was yanked and sold, and the game plan for the new drivetrain was put together.

Budget was a primary consideration, so engine choices were limited to what could be found easily found in local salvage yards. Nathan’s experience with turbocharging would surely shape the choice, as would the want for a modern electronically-controlled overdrive automatic transmission.

A 2006-era aluminum Ford 2-liter Duratec four-cylinder engine was found at a local yard for $300, and the project began in earnest. A 2009 Miata crankshaft was located — it’s a drop-in upgrade and is a forged steel piece that can deal with the added stresses of boost pressure and high rpm operation. The rod-and-piston package had to be premium quality, so no factory goodies would suffice. Manley forged H-beam rods and custom-crafted Wiseco forged pistons were teamed to provide 10:1 static compression.

The cylinder head is a factory aluminum Ford crossflow design that has been worked over by Jakson Stevens (another local turbo freak who happens to work at the Twin Cities’ horsepower temple known as TPI Specialties). The oil pan and pump are factory Focus items, but the sheetmetal intake manifold was hammered together by Nathan Shaw, and mates a factory Chevy Cobalt throttle body to the Ford head. With all of the parts finally under the same roof, Stacy assembled the engine for her car on her own.

The little 2L inline four has already put 475 horses to the rear wheels with a basic, conservative tuneup. Let’s do some math, and account for the automatic transmission behind the engine and other power-absorbing factors so we can estimate flywheel power here. Typically, around 20 percent is the norm, so we’d bet this engine is making just south of 600 peak ponies on a steady diet of E85.

The Precision PT5858 turbo draws in fresh air and sends it through the Treadstone air-to-air intercooler (which extends the full width of the grille) before the pressurized air passes through a Chevy Cobalt throttle body and into a home-brewed sheetmetal intake.

E85 fuel makes the 28-psi of boost possible, and is controlled by Holley’s proven HP injection system. All of this translates to a total of 475 peak horsepower to the rear wheels!

The power spins through a GM 4L60-E automatic (modified for drag racing use by John Freuler and equipped with a trick FTI lockup converter and a trans brake) before twisting a carbon-fiber Driveshaft Shop shaft and a Ford 8-inch rear axle (updated with a Detroit Tru-Trac, 3.0:1 gears, and Yukon axles).

In early testing, the car has already run an 11.71-second pass in the quarter-mile at 120 mph. The 1.4-second 60-foot time and conservative preliminary tune mean there’s a lot more hiding in the combination.

The Shaw’s will keep creeping up on the car’s potential as time and money allow. The goal is a 9.99-second run with this existing combination. Take a look at these pictures again — do you see a 9-second car? Not yet, but soon…

The great thing about lightweight cars with smaller, high-rpm engines is that the driveline parts don’t have to be incredibly heavy or expensive either. Consider the simplicity of the setup under the Falcon, with basic leaf springs, traction bars, and adjustable shocks, the car is already deep into the 11-second range on 215/50-14 tires.

To aid in street driving, the rest of the car’s suspension has been rebuilt and the front brakes have been updated to discs, courtesy of a Scarebird “Classic II” kit. The 14×6-inch (front) and 14×8-inch (rear) wheels were custom-made by Nathan from trailer wheels to fit the car while clearing the new discs in front and clearing the wider drag radials in the rear while looking like factory rollers. It works.

In addition to the rear, another pair of Viking double-adjustable shocks live up front, but in coil-over form to facilitate ride height adjustment. The stance isn’t aggressive, but it sure keeps with the car’s overall subtle appearance.

The relatively tiny 14-inch diameter drag radials are surprisingly effective, but more importantly, they truly look right at home under the diminutive Falcon. The factory mint green paint seals the deal. Plus, that 14-inch roller helps provide a taller sidewall, which more than likely aids in the traction department. 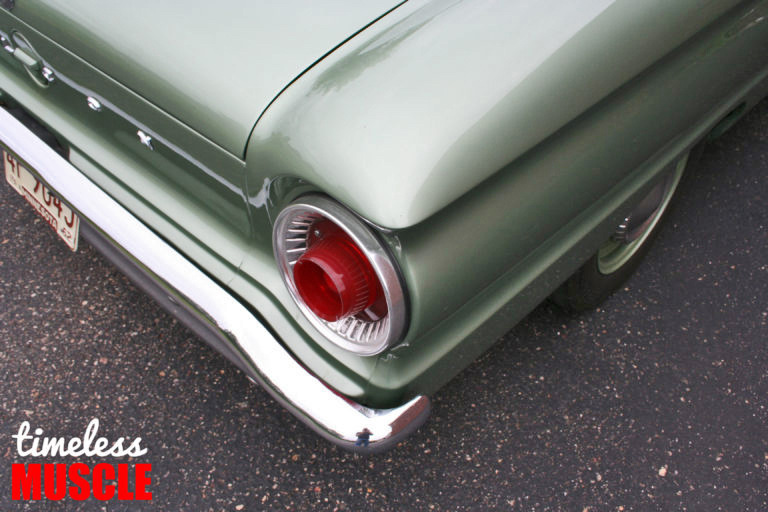 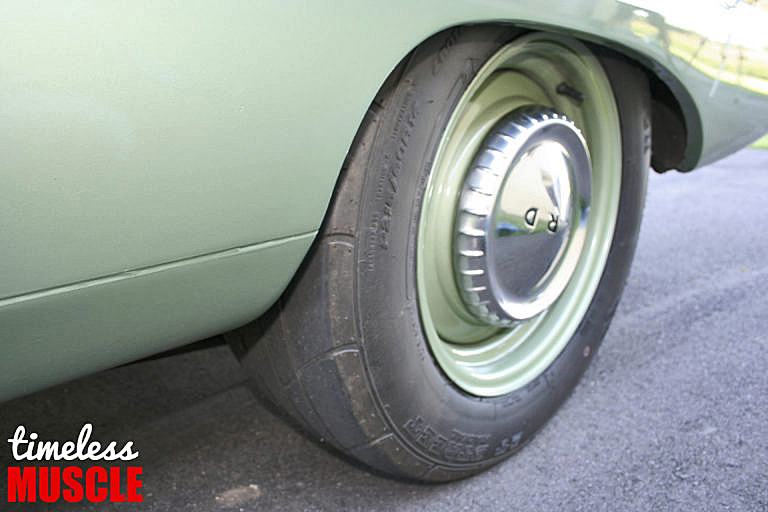 Inside the car, there’s more work to be done. The gauges are currently run on a Windows tablet, and a Holley digital dash will soon be in place. The various switches required for the electric fuel pump and transmission brake are not 100-percent finished, and a 6-point roll cage will soon find its way inside (but it will be hidden as much as possible). The factory bench seat might have to go, but we hope not. We also love the stock steering wheel and column shifter being left functional and in-place.

We love how there aren’t any clear definitions for what this car is. No single label can clearly apply, although the “sleeper” term sure gets thrown around a lot. The engine swap actually meant two-less cylinders and lower cubic inch displacement were the eventual result, although the loss of weight and gain in power justify it all. No body modifications have been made, and only the required safety equipment will cause changes to be accomplished to the car’s appearance.

The clean trunk-mounted battery installation is typical. The required battery shutoff switch is clearly visible next to the trunk latch catch (seen elsewhere on the page). But, where is the shutoff switch handle? It’s tucked in nicely above the license plate, at an angle. It’s perfectly functional and doesn’t distract from the overall look.

The subtle addition of the battery cutoff over the license plate is an example of how Stacy would like the modifications to be done- if you didn’t know it was there, you probably wouldn’t see it…which is a representative statement for this entire car.

Fortunately, you’ve seen what lies beneath, and if you see this car at a show, cruise night, or at the drag strip, you’ll know to take a second look. Whatever you do, don’t underestimate it. There are some videos of it making some early passes on YouTube (thanks to James Hrovat/Victoryredcolorado for permission!) and Facebook that are fun to watch!

This is the view most people get of the little Falcon. With the new all-aluminum Duratec 4 and late-model overdrive automatic trans in place, it weighs in at a svelte 2,600-lbs. It can easily deliver almost 30mpg on the freeway. It looks more like a barn find or a survivor than a drag car — heading deeper in the 11s toward 10-second territory, and hopefully 9s someday. We love it. We hate that it will be gaining a 6-point cage soon, but we understand why.