WATCH: An Electric and Autonomous DeLorean DMC-12 Drifts and Drives

Engineers in Stanford’s Dynamic Design Lab are teaching a driverless DeLorean to steer with the agility and precision of a human driver with a goal of improving how autonomous cars handle in hazardous conditions.

As the DeLorean rolled to a stop and the cloud of tire smoke cleared, Jon Goh peeked out the sliver of the passenger-side window to see dozens of gathered spectators cheering and high-fiving the successful test.

The crowd, and anticipation, had built throughout the afternoon, while Goh, a recent mechanical engineering PhD graduate from Stanford, had been outlining a kilometer-long obstacle course in traffic cones at Thunderhill Raceway in Northern California. The sun was setting fast, but Goh and his co-pilot, another grad student named Tushar Goel, couldn’t wait until morning to take a shot at the twisty course. Besides, MARTY, the driver, didn’t need to see the track – it needed only GPS coordinates and the algorithms on Goh’s laptop to chart its path.

MARTY is a 1981 DeLorean that Goh and his colleagues at Stanford’s Dynamic Design Lab converted into an all-electric, autonomous drift car. Four years ago, MARTY drifted – the style of driving where the car moves forward even though it’s pointed sideways – through its first doughnuts with inhuman precision. Since then, Goh and team have been busy welding and coding to prepare MARTY to apply those basic drifting skills to an intense driving course, and unbelievably everything had worked perfectly. MARTY screeched its way through turns and quick zigs and zags in just a few minutes, kicking up smoke and bits of rubber, without nicking a single cone along the course.

As the cheering continued, satisfaction washed over Goh. Completing the “MARTYkhana” course on the first attempt was awesome, but he knew that the one-of-a-kind data gleaned from the run could transform the capabilities of autonomous driving systems found in cars today.

Going beyond the limits to get into control

MARTYkhana – a riff on the “gymkhana” autocross racing format regarded as the master test of a driver’s ability – is hardly a stunt. Conducting research in high-speed, complicated driving conditions like this is a bread-and-butter approach of the Dynamic Design Lab, where mechanical engineer Chris Gerdes and his students steer autonomous cars into challenging driving situations that only the top human drivers can reliably handle. On-board computers measure the car’s response over dozens of runs, and the engineers translate those vehicle dynamics into software that could one day help your car quickly dodge a pedestrian that darts into the road. 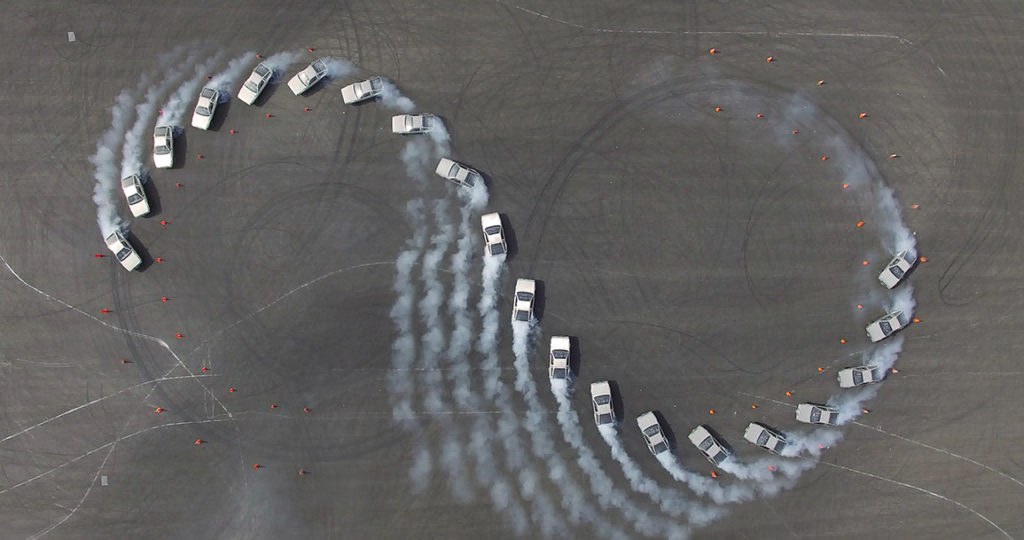 Most automated vehicles on the road have been designed to handle simpler cases of driving, such as staying in a lane or maintaining the right distance from other cars.

Training an autonomous car to drift is a surprisingly good method for testing a car’s ability to drive evasively. Under typical conditions, a driver points the car where they want to go and uses the accelerator and brake pedals to control the speed. When drifting, whether intentionally or not, this goes out the window.

“Suddenly the car is pointed in a very different direction than where it’s going. Your steering wheel controls the speed, the throttle affects the rotation, and the brakes can impact how quickly you change directions,” Goh said. “You have to understand how to use these familiar inputs in a very different way to control the car, and most drivers just aren’t very good at handling the car when it becomes this unstable.”

Commercial vehicles are outfitted with Electronic Stability Control systems that try to prevent cars from entering these unstable states, but this is where drifters thrive. They harness this instability to maneuver the car in more agile and precise ways that allow them to scorch through a narrow obstacle course without so much as grazing the barriers.

By studying the habits of professional drivers and testing those same control maneuvers in MARTY, the Stanford team has enabled the car to use a greater range of its physical limits to maintain stability through a broader range of conditions, and the mathematics involved could allow autonomous systems to maneuver with the agility of a drift racer in emergencies.

“Through drifting, we’re able to get to extreme examples of driving physics that we wouldn’t otherwise,” Goh said. “If we can conquer how to safely control the car in the most stable and the most unstable scenarios, it becomes easier to connect all the dots in between.” 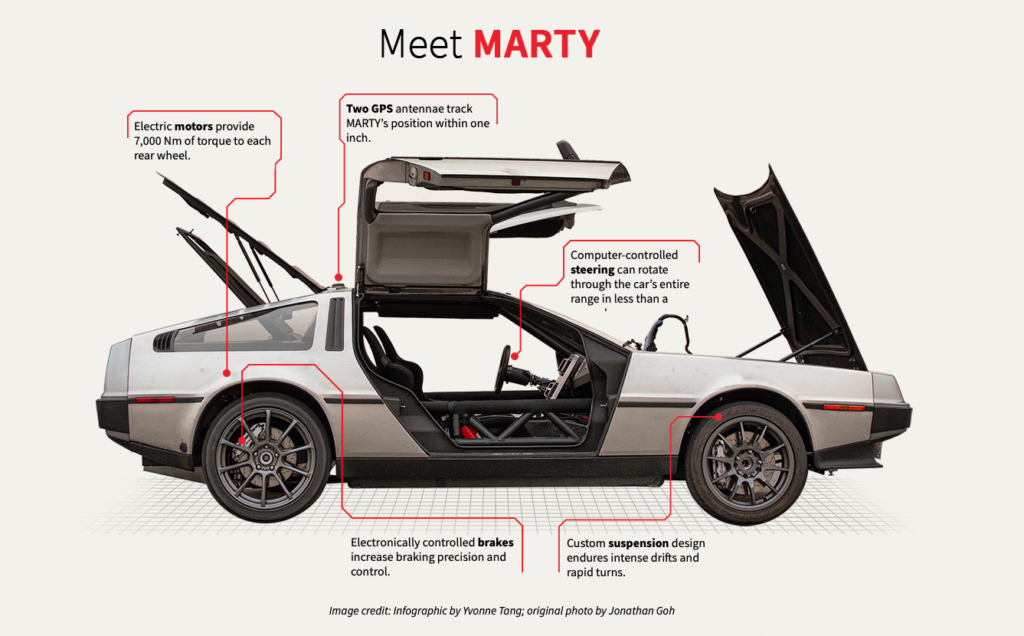 When Gerdes and Goh set out to build MARTY – which stands for Multiple Actuator Research Test bed for Yaw control – they knew they wanted a car with rear-wheel drive that would allow the freedom for endless upgrades, and they wanted it to have a certain cool factor.

“The way we see it, if you’re going to build a research vehicle, why not do it with some style?” Gerdes likes to say, nodding to the classic line from Back to the Future.

A DeLorean ticked all those boxes. If you were to look underneath MARTY’s iconic stainless steel shell, you’d find very little DeLorean at this point. The underpowered drivetrain has been replaced by stout batteries and electric motors developed by Renovo. The original suspension was too squishy to hold a decent drift, so the team designed and fabricated components that could stand the task. Mechanical controls for steering, braking and throttling were replaced by electronic systems. There’s a roll cage.

A pair of GPS antennae dot the roof and track the car’s location to within an inch, and the whole operation runs on computers tucked behind the seats. Entering the course layout, MARTY calculates the smoothest drift route possible in a matter of seconds. It takes far longer to set up the traffic cones.

The first MARTY-related journal paper was recently published and defines the system that the car uses to control its angle and position precisely in basic drifting conditions. The controller design was far more straightforward than expected, Goh said, and is open access to allow others to repeat the approach.

Other papers in the works will detail the techniques the team developed that use the car’s full steering range, which is what allows it to complete more complicated routes, such as MARTYkhana. And the team continues to experiment with how incorporating front and rear brakes can open up even more capabilities for the autonomous system. Altogether, this work allows MARTY to make sharper turns in succession even more quickly, which will further help train it to navigate extreme conditions.

“The results so far are rather outstanding,” Gerdes said. “The stability control systems of modern cars limit the driver’s control to a very narrow range of the car’s potential. With MARTY we have been able to more broadly define the range of conditions in which we can safely operate, and we have the ability to stabilize the car in these unstable conditions.”

Drifting is as much an art form as a technical skill, a detail Gerdes has emphasized since the beginning. It’s why he’ll gush over how impressed he is that his students have programmed MARTY to drift on par with professional drivers.

“It’s really impressive how snappy the car can make those transitions and also how precise it could be,” said Fredric Aasbo, the 2015 Formula Drift World Champion. “Because that’s the trick as a driver. That’s what we’re all trying to figure out.”