Car Feature: A Droptop ’70 Chevelle with a Cali Vibe 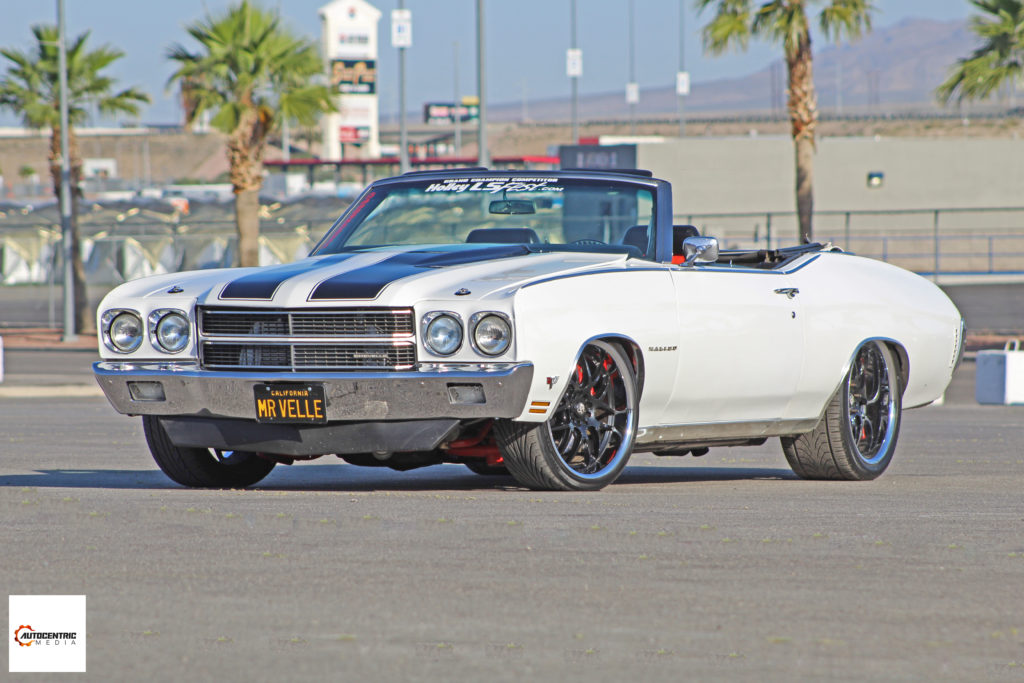 If you were to ask just about anyone well-versed in the Gold Age of Musclecars, what the most coveted muscle car is, you’d arguably get different responses from different people. However one of the top five answers is always, the 1970 Chevelle. It’s the year most coveted due to its combination of style, performance and engine options. It was also available with the revered LS-6 454 cubic-inch plant that provided 450hp — the pinnacle of factory-rated horsepower offered from a “mainstream” muscle car of the time period.

Of course there were lower-line and more tamer versions of Chevelle available that year, and many of them have since been converted to drag cars and incredible street machines. Since the ’70s, the most popular thing to do was to either hop up the small-block under the hood, or swap in a big block from the Super Sport version. In more recent years, we’ve been seeing more and more late-model LS mills tucked between the flanks of these things.

During a visit to the 2019 Holley LS Fest West, there were quite a few in attendance, but one in particular jumped out at us. A ’70 convertible owned by William Petersen, equipped with a pair of rumbling pipes and the whine of a supercharger emitting from the perfectly straight body intrigued us to take a closer look. As it turns out, it was worth it.

Willy has been a A-body man for a very long time, having owned several ’70 Chevelles, and a pair of ’72 Cutlasses, he tells us that his love for these cars run deep. Hence his license plate, “Mr. Velle.”

Under the hood, is a 6-liter LS with a stock bottom end and a 10.9:1 compression ratio. Thrown into the recipe is a Holley oil pan, a Melling high-flow oil pump and a modified windage tray. A Brian Tooley camshaft with a 220/230 duration, .581/.591 lift and a 116+3 LSA sits squarely in the block. Up top, are stock GM heads stuffed with BTR 1.7 rocker arms, and Chevrolet Performance intake and exhaust valves.

A Holley mid-rise intake manifold, paired with a Nick Williams 102mm throttle body smooths out the airflow going into the engine. Such induction modifications are needed, largely due to the fact that there’s a centrifugal blower otherwise forcing the air into the engine. Namely, a ProCharger D1SC cranking out 12-lbs of boost, that works with a CX Racing intercooler to keep things cool. 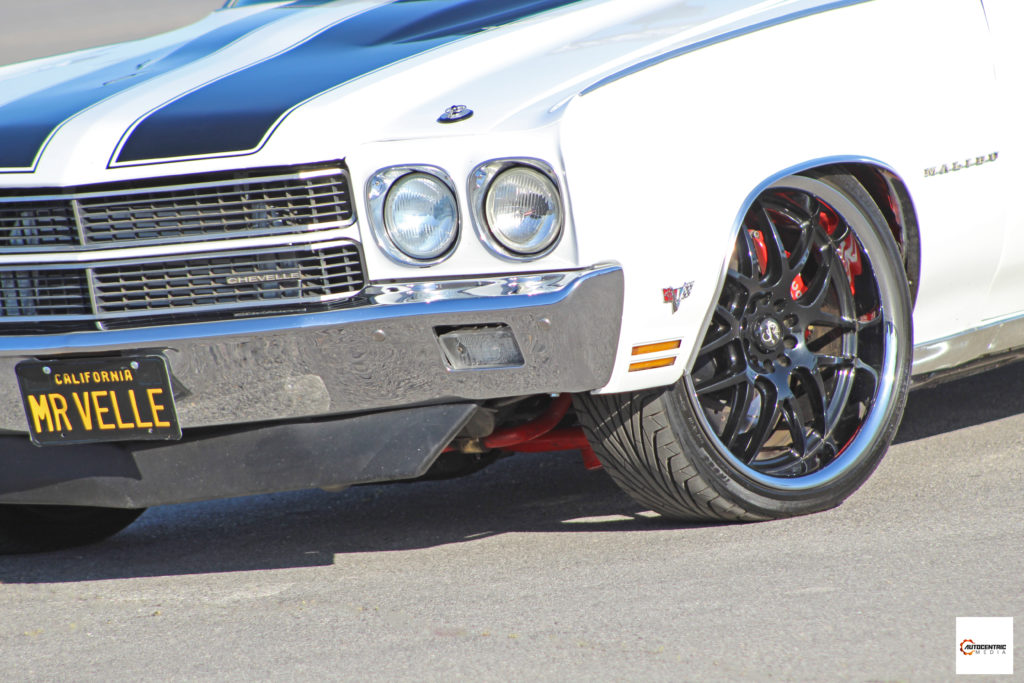 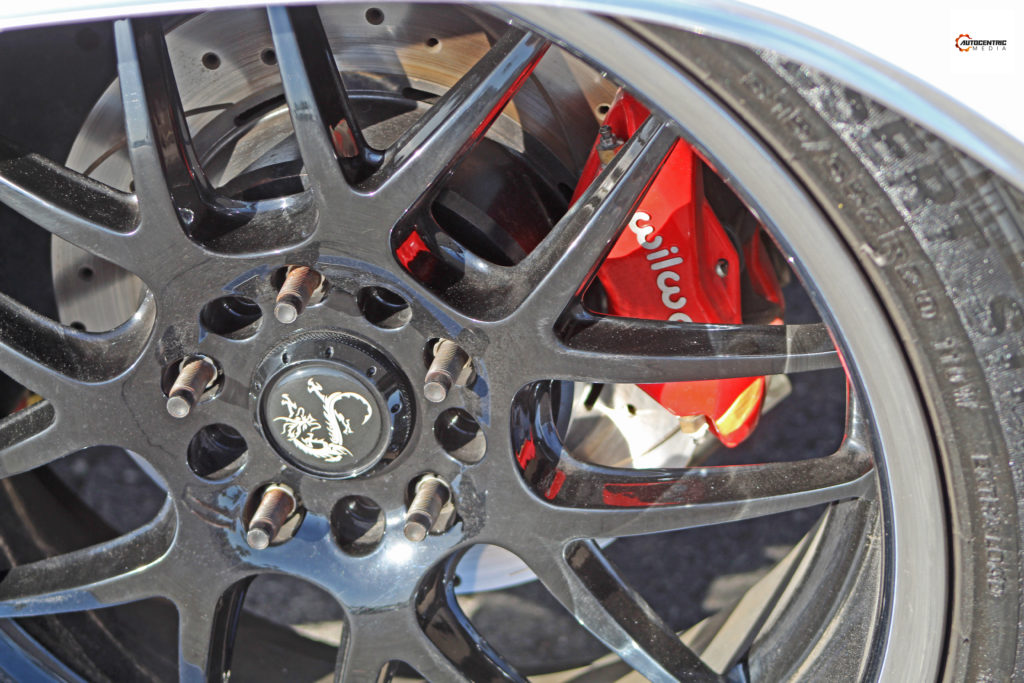 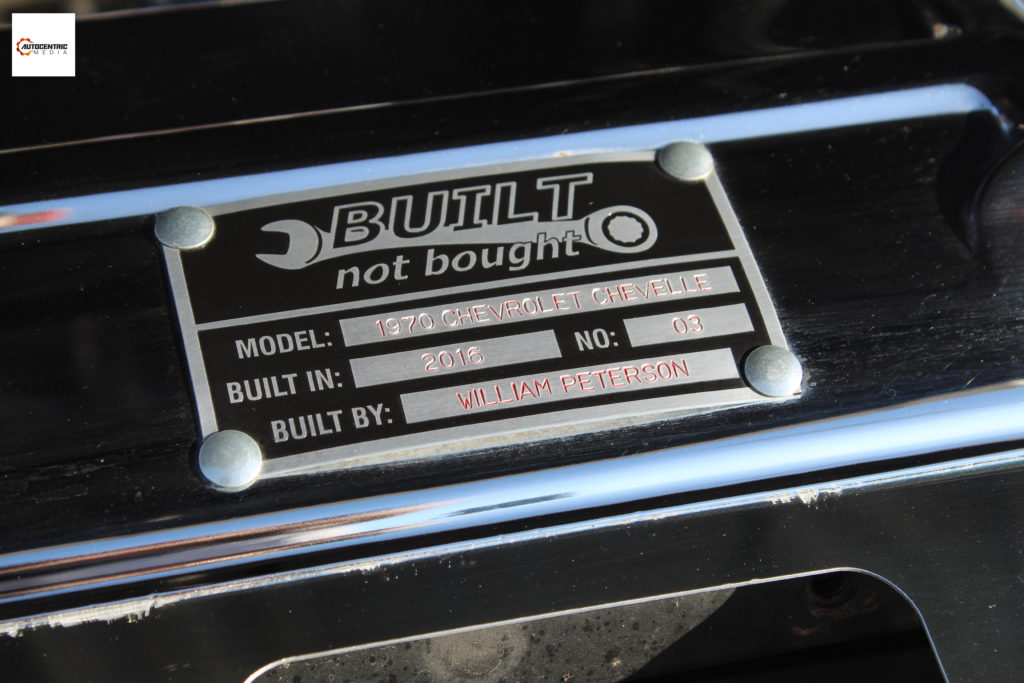 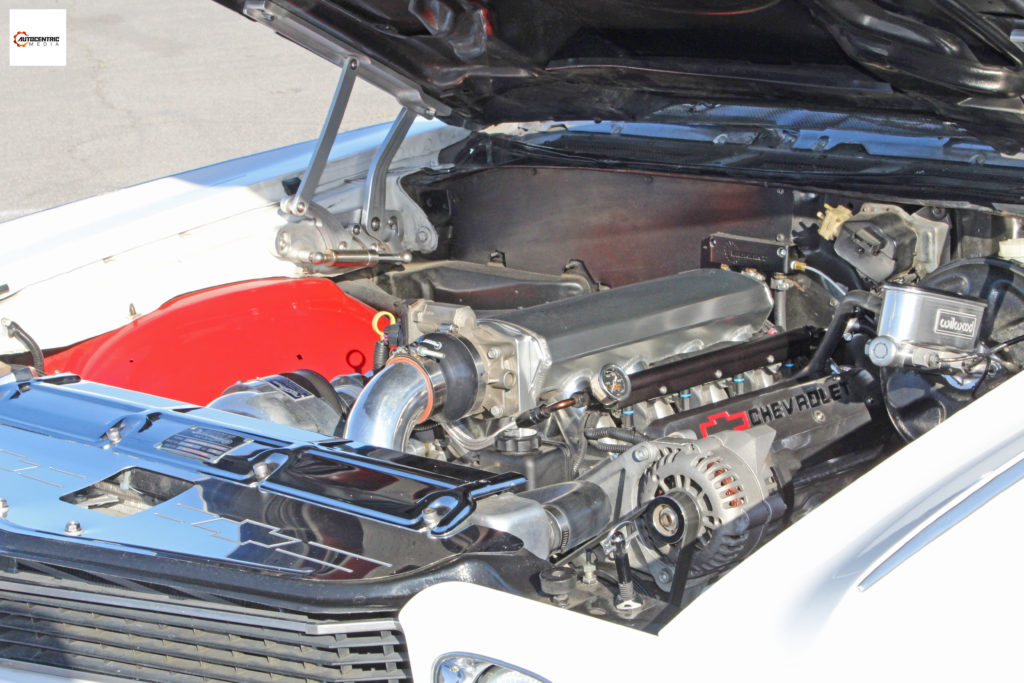 To help send the spent fumes out of the exhaust tips as efficiently as it is coming in, a set of Hooker ceramic-coated, long-tube headers are called upon that connect to a high-flowing H-pipe and Black Widow Neighborhater mufflers. The sound is pretty raw at WOT, but at idle and at cruising speed, it’s perfect and not to obnoxious — at least by our standards.

Airflow is only part of the equation, and to have an engine that’s well-balanced, you’ll need adequate spark and a healthy fuel system. To make sure he had both covered, Willy equipped the Chevelle with an Aeromotive adjustable fuel pressure regulator, 57-lb. injectors, and a 340-lph fuel pump. MSD spark plug wires and coil packs bring the package all together. He also had Mark Roman handle tuning duties for the old A-body, to maximize his efforts. The final numbers resulted in a total of 697 hp and 653 lb-ft to the rear tires. For you quarter-mile goers, it translates to a best of 11.27 at 124 MPH on West Coast 91-octane — which is basically water.

What’s also particularly interesting about Willy’s car, is that he didn’t stop with the engine — he wanted a car that not only had straight-line power, but it had to be able to turn, as well. He also prefers to shift his own gears. So instead of the typical TH400 and a set of traction bars, he wanted to step things up with a Hurst-shifted Tremec TR6060, equipped with a Centerforce clutch and flywheel. 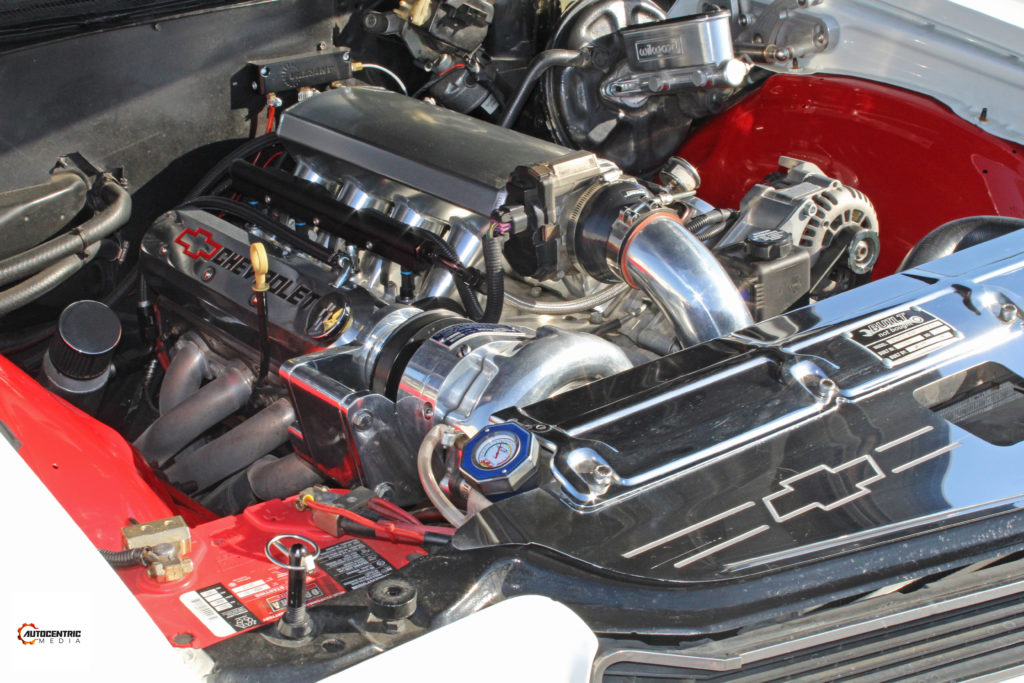 A built 12-bolt with Moser 33-spline axles and 4.11 gears sit out back, with the suspension being completely updated with QA1 coil-overs at all four corners, front upper and lower A-arms, and UMI sway bars, front and rear, keeping the car planted in the corners. To ensure that the car’s steering is up to par, a Flaming River quick-ratio steering box went in place of the original unit.

Rounding out the foundation are a set of 20-inch XXR wheels on all four corners, with 8-inch wide rollers up front and a pair of 11-inch wide rollers out back, all of which are wrapped in Nitto NT05 rubber. Tucked behind the rollers, are 6- and 4-piston Willwood binders, for that moment when Will needs to step on the brakes fast.

One intriguing feature that jumps out about Mr. Petersen’s car, is that he didn’t try to pass toff as an SS, or an “SS clone.” Yeah, it has the typical racing stripes and even the cowl-induction hood, but there are no SS badges found on the car anywhere, the SS rear bumper pad has been left off and it even still has the chrome strips running on top of the fenders and the doors, as found on most base trim level Malibus and Chevelles. As an added touch, the Chevelle is equipped with a front spoiler from a first-gen Camaro. As a result, it has the perfect amount of attitude without trying to pass as something that it isn’t. 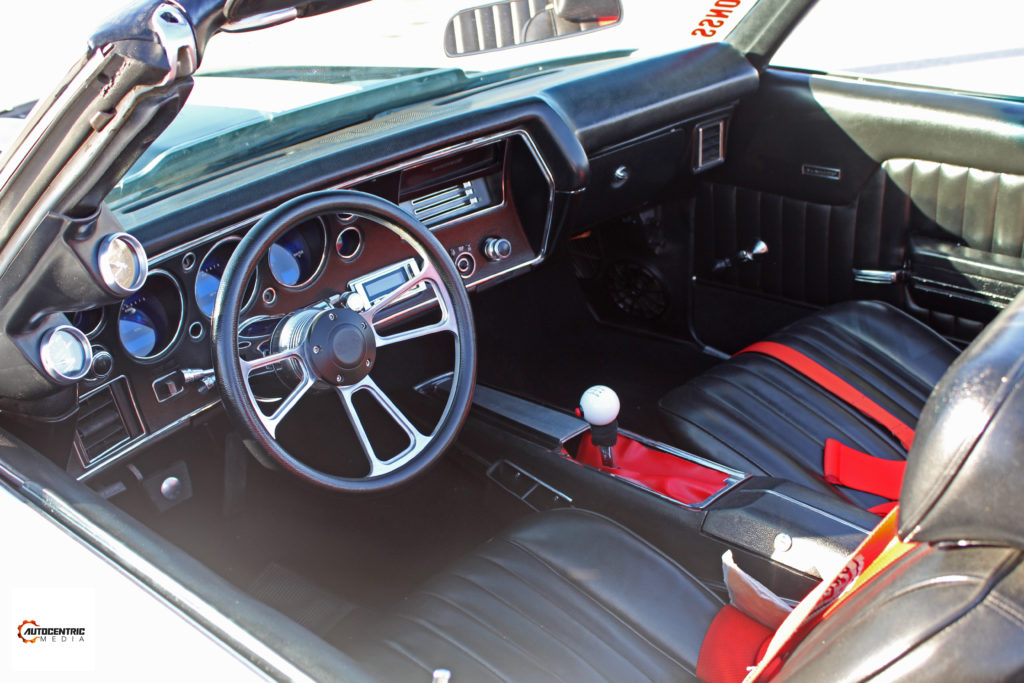 In the cockpit, the things that immediately jump out at you are the black bucket seats with 5-point harnesses, and a Dakota Digital gauge cluster. The gauge cluster is important, as it provides the driver with accurate information on the fly — the last thing Willy needs is an engine failure while blasting on the road course.

Looking at this car, you wouldn’t believe that Willy had picked it up from Canada, updated all of the mechanicals himself and then has driven this thing to multiple states all over the country. It’s since been featured in the Bay Area Goodguys Gazette and has one multiple car show awards. As an added bonus, his wife Christine is extremely supportive of his passion for Chevelles and even let Willy pick the names for his two daughters; Kali Chevelle Petersen, and Karolina Malibu Petersen — that’s dedication!

While the future plans for the car are still up in the air, we have a feeling that Will Petersen will be driving and enjoying his car for years to come, ultimately passing the Chevelle down to his daughters to enjoy. Gotta spread the Chevelle love! 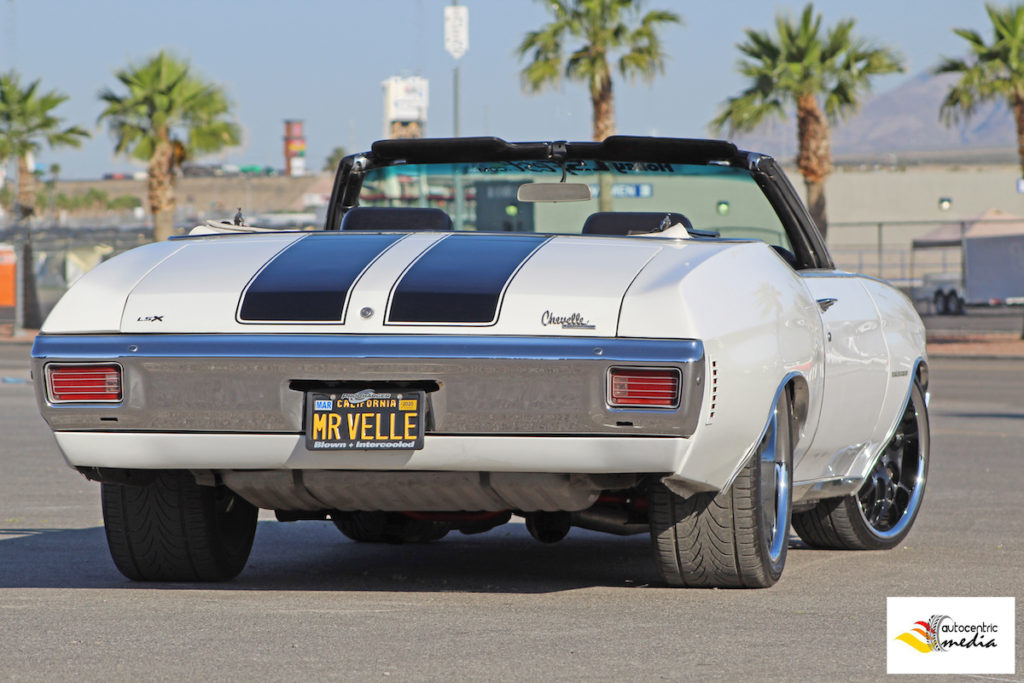