Revitalizing the Passion for a Turbo Buick

To the late-model GM crowd, you’re either on one side of the fence or the other; you’re either in love with Turbo Buicks or you think they’re no longer relevant. You can argue that they were “fast for their time” and they’re a historical footnote in electronic fuel injection performance from General Motors, but we’ve “since moved onto bigger and better things.” However, plenty of today’s enthusiasts remain loyal and passionate about the Flint Flyer, including your author.

Despite their ’80s build quality, stodgy exterior exterior and lack of any real handling characteristics (an important need in a modern performance car), their mod-friendly turbo V6 offers loads of outright performance potential and the aftermarket is ripe with modifications for the picking.

Rich Townsend is one such person who has owned his ’87 Grand National for over twenty years, and almost considered moving on to another project. However, many friends in the community, especially Scot Walkowiak of GNS Performance, made him reconsider cutting the GN loose. Not one to jump on the various Turbo Buick drag racing classes that’s become sort of the norm in the community, Rich took Scot’s advice and decided to build an autocross contender.

Having loads of experience and insight, Scot recommended to Rich to swap out the antiquated OEM suspension for a blend of RideTech and Detroit Speed hardware — because let’s face it, even by 1987 standards, the stock components were undermatched for the power and performance of a stock GN.

Starting with the frame (which is rather weak in stock format), Rich stiffened the chassis with a Detroit Speed chassis brace for improved rigidity and strength. RideTech coil-overs, upper and lower A-arms along with front and front sway bar help the factory steering box navigate the car through the corners, while Ridetech coil-overs, Detroit Speed rear sway bar and upper and lower swing arms keep the rear planted to the pavement.

Under the hood, is a completely stock Grand National long block. The LC2 offers plenty of room for a huge power increase in its original format, but the magic is largely in the turbo boost level, fuel delivery, ECU calibration, and exhaust system.

The fuel system has been lightly massaged, too, and is imperative to improve upon even if you own an otherwise bone stock Turbo Buick. Rich upgraded his with a Walbro 340 pump, Kirban Performance regulator (42-psi.) and 42-lb. injectors.

Rich addressed all of these, by cranking the boost level of the stock Garrett turbo up to nearly 20-psi., installing an ATR 2.5-inch diameter stainless catback exhaust with Kooks mufflers, and ditching the restrictive stock downpipe for a 3-inch stainless piece. The stock coil pack remains, with a set of Moroso Ultra-40 plug wires providing the spark. 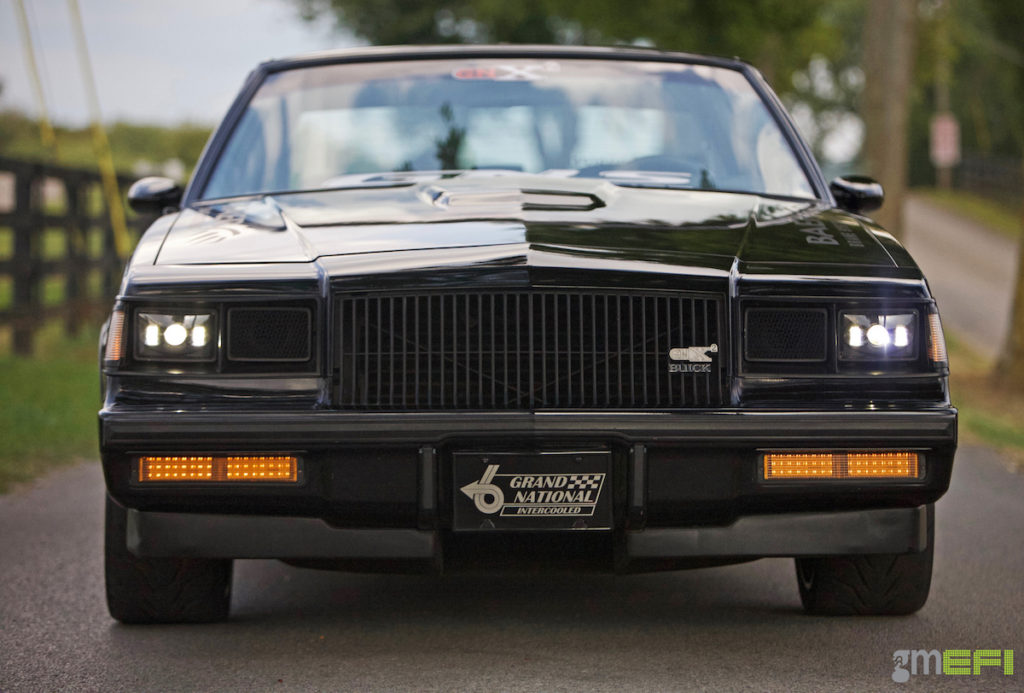 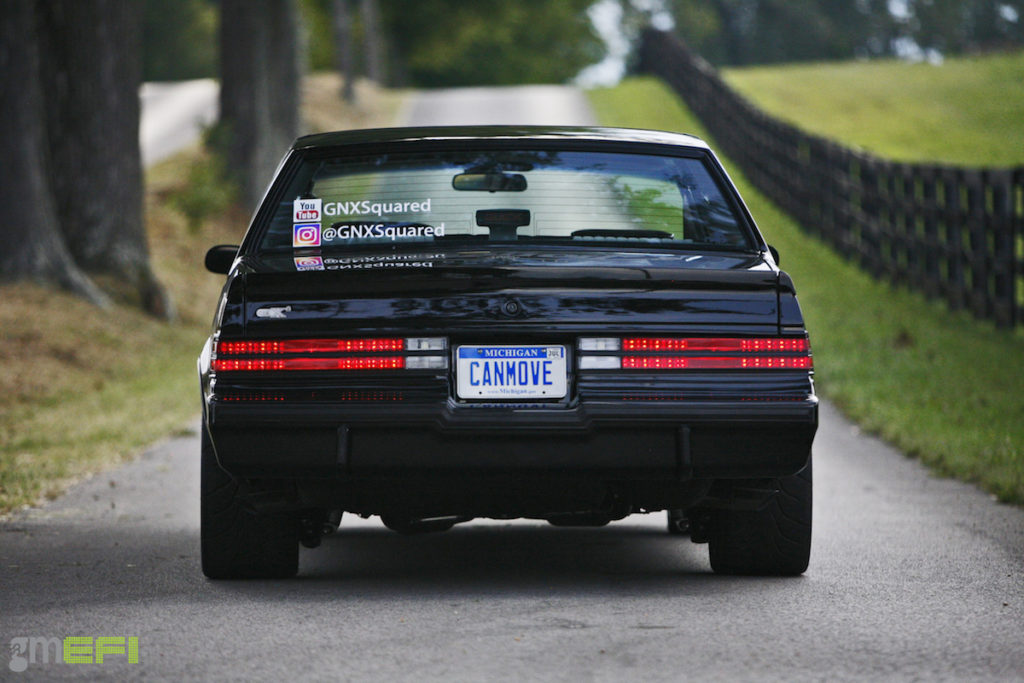 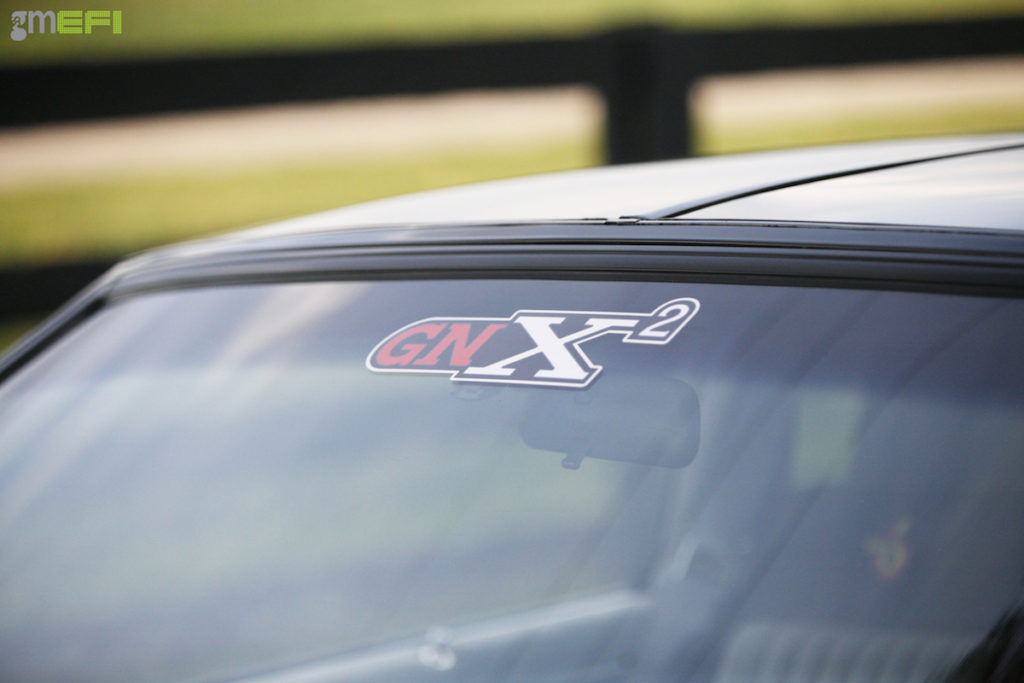 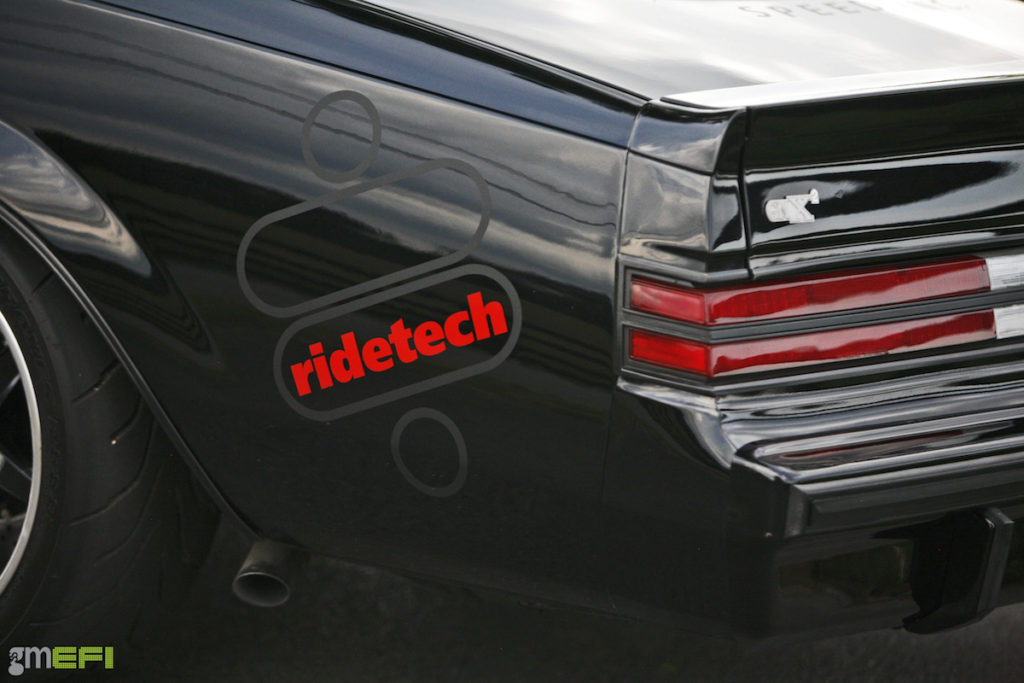 Induction is handled, via a 9-inch K&N cone filter, feeding through a 3-inch intake tube and MAF sensor, and into a stock throttle body. The intake manifold has been left alone, and the OEM exhaust manifolds are still in place. Which is fair enough, as they provide plenty of flow characteristics for around 600hp. The OE-style ECU remains, albeit, recalibrate by Brian Lorenz of Lorenz Racing and Performance. Rich wasn’t able to strap it down to the dyno, but after having a brief moment of seat time behind the wheel, your author feels confident it’s somewhere north of 400 horsepower.

Backing the lightly modified LC2 is a 200-4R, fortified with stronger internals by Janis Transmission and an Orange Stripe 3,000 stall converter. The strengthened gearbox allows for precise shifts and prolonged life, while the converter puts the GN into its powerband much quicker than what the stock converter could. 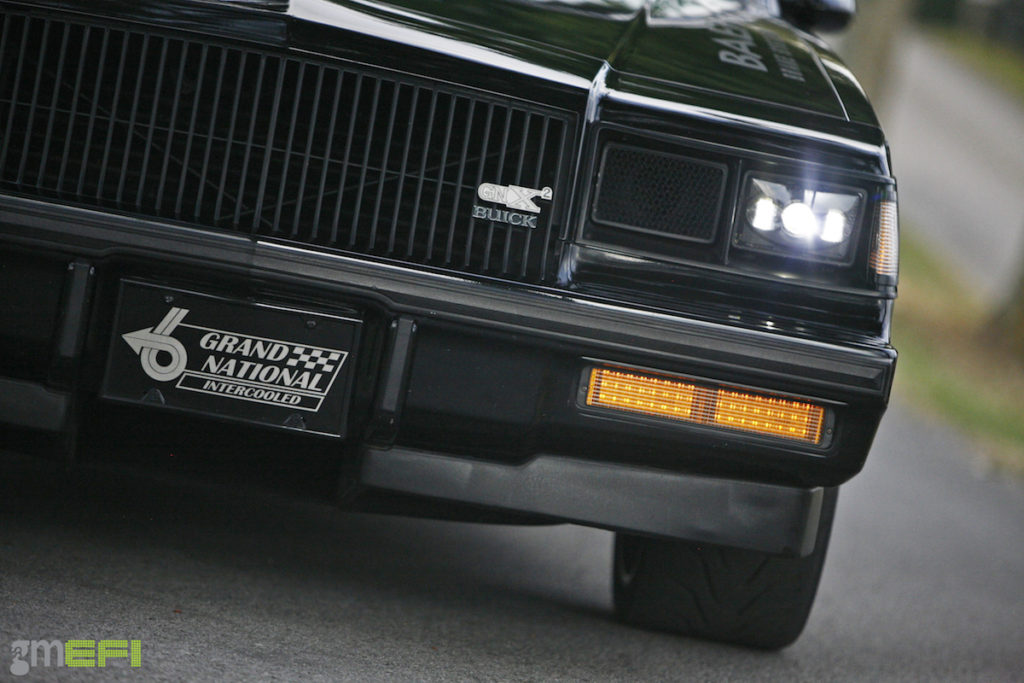 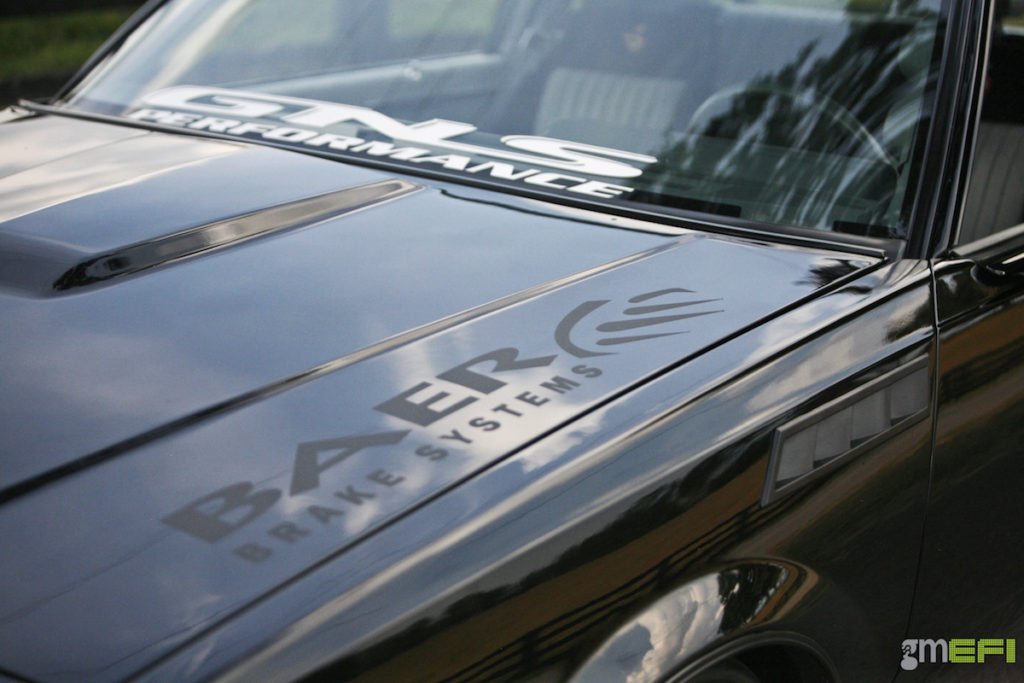 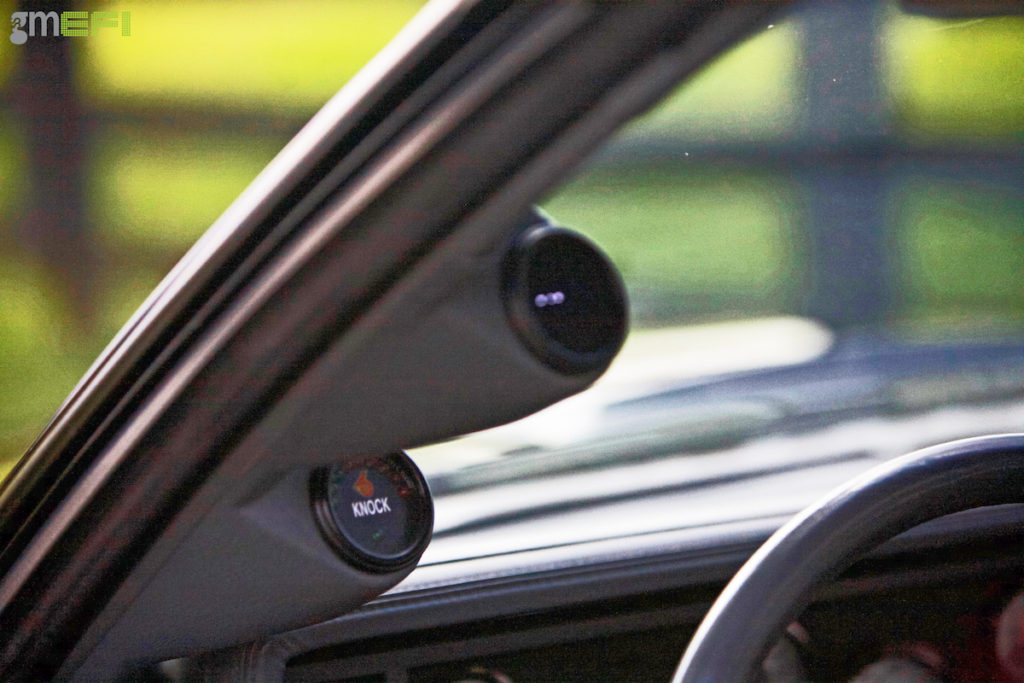 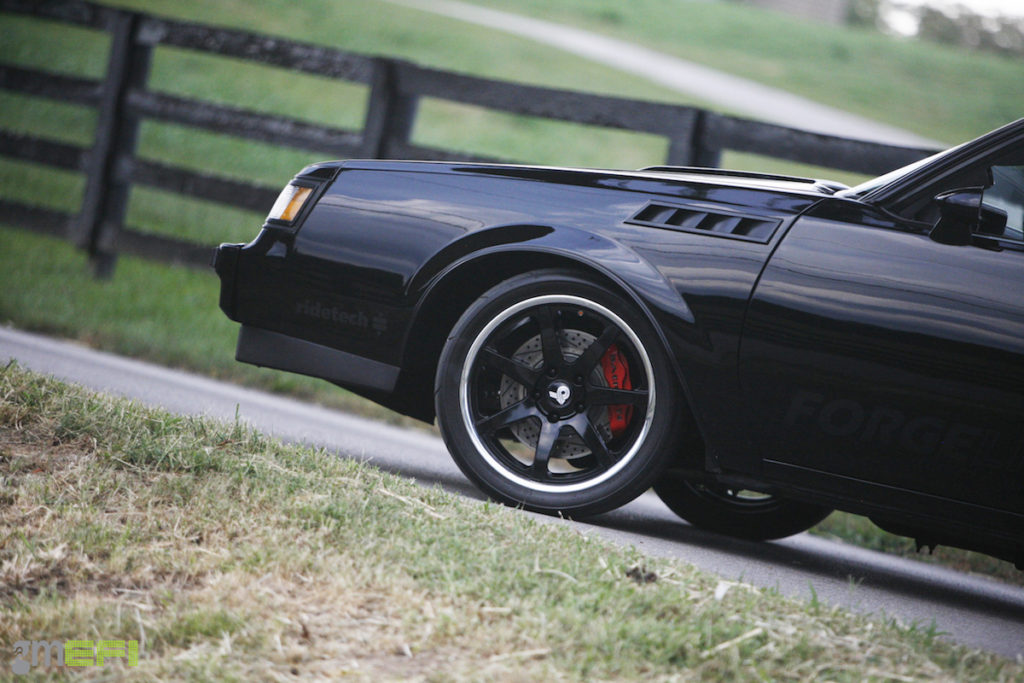 Great power and a killer suspension is only part of the formula, however, as a properly-built pro-touring car needs to have a very competent braking system, as well as rolling stock that can work with the suspension to keep the car planted in the corners. Rich decided upon a set of powdercoated Forgeline CV3C rollers, measuring in 18×8.5 in the front and 18×9.5 out back for his wheels of choice.

Their lightweight forged design provide both functionality and strength, as well as allow Rich to ditch his puny stock binders for a set of Baer Brakes 14-inch rotors and 4-piston calipers.

Sticky Toyo Tires R888 rubber wrap the Forgelines, in very modern dimensions; 255/35/18 (front) 275/35/18 (rear). We have them on our Project Phoenix, and we can attest that they provide tremendous grip in the dry weather, and incredible performance around an autocross course.

Sitting out back, is a stock GN-spec GM 10-bolt rearend, that’s been rebuilt and improved with a Eaton Detroit TruTrac rearend. The stock 3.42 gears still remain, as just about any Turbo Buick guru will attest that the gear set is the perfect gearing for the LC2/200-4R gearbox combination.

On the exterior, the body has been left largely stock, with the exception of GNX fender vents and LED lighting, front and rear. The “Grand National” and “3.8 SFI Turbo” badges have been ditched entirely, and in their place went custom-made “GNX2” emblems, as a nod to the ultimate-performing Turbo Buick from the same year as Rich’s car. Rich explains this is his idea of what the ultimate, modern interpretation of what a Grand National should be.

On the inside, is largely standard-issue Grand National, with the addition of a two-gauge A-pillar pod, stuffed with a second-generation Scanmaster and a knock gauge. In addition, the entirely useless 85mph speedo, LED boost gauge and tachometer have all been ditched in favor of a custom gauge panel from GNS Performance. Included, you’ll find a 8,000RPM tachometer, 140-mph speedometer, oil pressure, boost, water temp, volt meter and fuel level gauges. The entire package looks great, and provides Rich with a competent cluster in which to monitor his engine’s vitals. Otherwise, the rest of the interior, including the seats, have been left entirely alone.

Rich’s dedication for his Buick is proof that the love for these cars haven’t waved, never mind their age and continual decline in remaining examples. Further plans call for wider rubber all around, GNX fender flares, a PTC converter, increased engine performance, more supportive racing seats and a FAST XFI system. Once these parts are implemented, there will be no doubt that this GNX2 will conintue to remain relevant for the better part of the 21st century.