Easy Power for Your EcoBoost Mustang

photos and video by: the author

Borla Bolt-Ons for the S550 Mustang Nets a Respectable Increase

The majority of Mustang performance enthusiasts stand firmly in the “V8 or nothing” camp. However, diehard fans might remember the slightly eccentric  Mustang SVO from the ’80s. Just like the current EcoBoost-powered cars, it sported a turbocharged four-banger and had good tuning potential. So when FoMoCo stuffed its efficient 2.3-liter turbocharged EcoBoost motor in the S550, we knew it would be one of two things; either the base engine for non-enthusiasts who simply wanted a cool car, or it would pack a serious punch and be considered a performance alternative – Ford chose the latter, endowing the four-cylinder with a generous 310hp and 320 lb-ft.

You’d have to be living under a rock to have missed the EcoBoost S550 Mustangs take the scene by storm – not only bringing fresh blood into the Mustang world, but also proving boost is king and providing an interesting alternative to the venerable V8.

A simple search of the forums proves that not only is the Mustang’s 2.3-liter EcoBoost motor supremely capable (there’s already a heavily modified example in the 9s!), but it responds well to simple modifications. That’s right, the EcoBoost Mustang follows in the footsteps of its predecessors by allowing simple bolt-ons to unlock a pile of power, which is why we’re here today…

“I really like the EcoBoost motor,” said Alfredo Martinez, owner of the 2016 Mustang seen here. “It has a ton of torque and gets good fuel mileage, but it’s too quiet with the stock exhaust and it could use another 50hp, in my opinion.”

Since the owner of this 2016 Mustang Performance Pack in Competition Orange also has an 800whp GT500, he wasn’t looking for a long list of major mods. Rather, he wanted a better sound and a usable power increase he’d notice during his daily commute. With that in mind, he turned to BRG Racing in Pacheco, CA for advice on bolt-ons that wouldn’t break the bank. Since the car is still under warranty, another important caveat was the ability to easily return it to stock.

“If you’re looking for something that’s easy to install, easily removed, and offers gains in power and torque, the Borla XR-1 Tuner could be a good option,” said Freddy Martinez from BRG.

After a call to the Borla techline, we confirmed what Martinez had told us: our EcoBoost would benefit from the new XR-1 Tuner device. We also decided to take it one step further by also adding the Borla S-Type cat-back exhaust system for more power and a healthy shot of personality, thanks to a much-improved exhaust note.

Once the Borla goodies arrived, we returned to BRG Racing for a day on their Mustang dyno to discover the real-world gains for each addition. But before we recount the day of wrenching, let us delve deeper into the parts. The Borla XR-1 Tuner for the EcoBoost-equipped 2016-on Mustang is simple to install, offers healthy power gains and the tune can be reverted to stock in minutes thanks to its smart design.

“The new XR-1 Tuner was launched at SEMA 2016 and represents the latest technology in vehicle performance electronics. It’s a piggy-back performance computer, also referred to as intercept device. It functions by taking a sensor output signal, modifying it, and sending the signal to the ECU. The ECU responds to the altered signal, which allows more performance to be extracted from the engine. The OEM ECU programing and safety protocols are retained, reprogramming by the dealer does not erase the performance gain, and there’s no trace in the ECU that the device was fitted,” said Ola Lysenstoen from Borla.

The XR-1 Tuner is an off-road device and it’s worth noting that with the included bypass plug installed, the unit can be disabled and the car returned to the stock mapping in less than one minute. “During the design phase, the idea of a bypass plug was explored because it would allow the car to be returned to stock very quickly. The bypass connector is plugged into the harness in place of the controller in less than a minute,” Ola said. 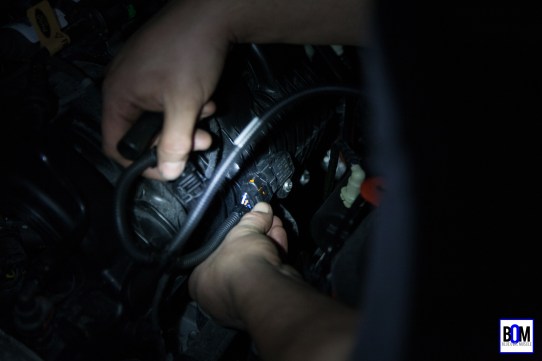 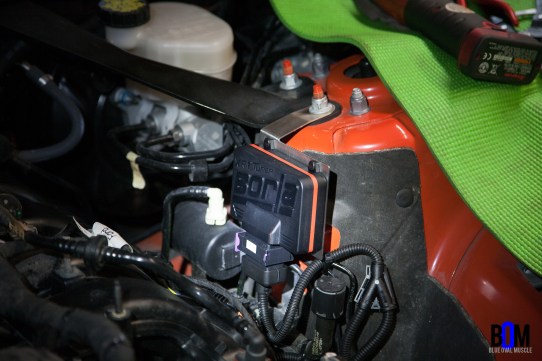 Beyond the unique bypass plug, if you want to remove the unit and its wiring harness, it can be uninstalled in less than 30 minutes thanks to a simple DIY-oriented design and OEM-level harness.

Speaking of OEM – since the tuner intercepts signals leaving the ECU, its stealth design leaves no trace in ECU flash memory, nor is it affected by ECU software updates by dealerships. The unit also features SMD construction with OEM levels of resistance to heat and vibration. There is a fast 48Mhz processor inside the resilient case that’s capable of computing more aggressive boost maps under the curve, which according to Borla also alters the timing tables – this is what increases power by up to 40hp and 70 lb-ft under the curve, according to Borla. The installation process is beyond simple, and from start to finish it took us less than one hour. We started by removing the engine cover and airbox lid to access the intercooler-mounted pressure sensor and the second pressure sensor mounted on the intake manifold. 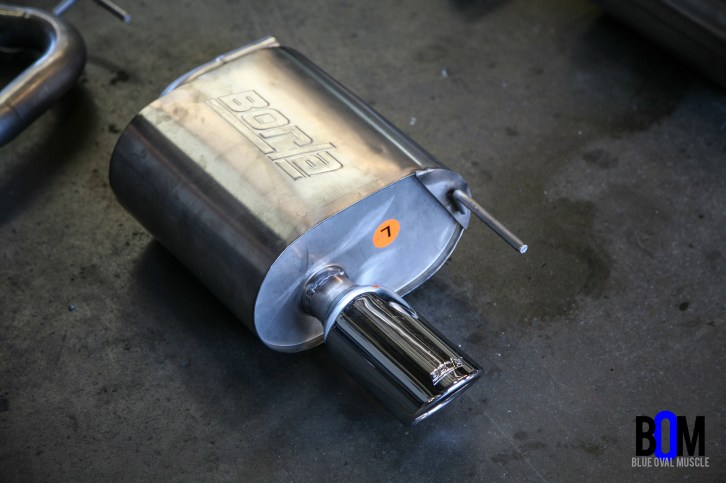 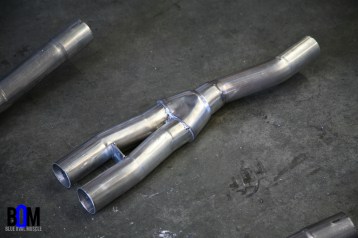 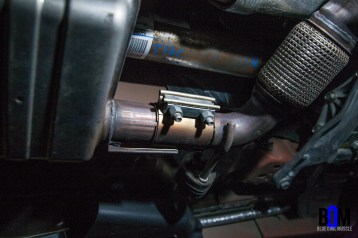 Relieving restrictions is one of the quickest ways to unlocking more power in your fast Ford, especially if it has factory forced induction. So it made sense that if we were going to use the Borla XR-1 Tuner, we might as well relieve restrictions with a free-flowing cat-back exhaust system.

Cool thing about Borla is, it offers three different exhaust systems for most models. It’s definitely not one-size-fits-all – every Borla exhaust is designed specifically on that vehicle and you can pick which system best suits your needs. Borla is unique in offering three different exhaust systems for most models; from mild to wild, or in Borla-speak, ATAK, S-Type, and Touring. The Touring systems offer a deep tone that is slightly louder than stock, the S-Type systems are deeper and louder, while the ATAK systems have the most aggressive sound and louder volume

While Borla offers three different versions of most systems: Touring, S-Type, and ATAK; we found it easier to view them as mild to wild. The Touring systems offer a deep tone that is slightly louder than stock and without the restrictions, while the S-Type systems offer a deeper and louder tone that’s aggressive without being obnoxiously loud. For those that want a higher frequency and a nice collection of pops and snarls on the over-rev, should opt for the most aggressive system from Borla – the ATAK system. In case you’re wondering, we chose the S-Type, since it would improve the sounds while remaining relatively unobtrusive for daily driving duties.

What all Borla systems share is 100% stainless steel construction and an unrivaled fit and finish. Seriously, if you’re looking for OEM fitment and longevity, look no further than Borla. Oh yeah, Borla exhaust systems also come with a 1,000,000-mile warranty – how’s that for standing behind their product!

In addition to uncorking the factory restrictions with freer-flowing mufflers and larger diameter tubing, the Borla system was also just shy of 20 lb lighter than stock. The Ford system weighed 68 lb, while the Borla was a mere 49 lb. So that’s an additional performance increase thanks to less weight to lug around.

As for installation time, well, it was a cinch to fit thanks to clamps and hangers that literally fall into place. The mufflers were a perfect fit in the factory locations, and it doesn’t hurt that the stainless tips look great in the factory cutouts, filling them nicely. The Borla system not only sounds significantly better and makes more power than stock, but it’s also nearly 20 lb lighter as well! Here’s a side-by-side shot of the OEM piece to the sophisticated, Borla kit. Note the highly-polished tips, and the resonator delete in the Borla system. 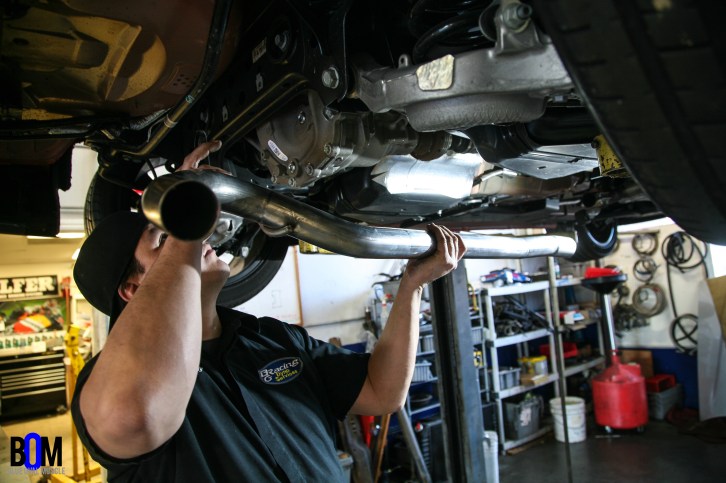 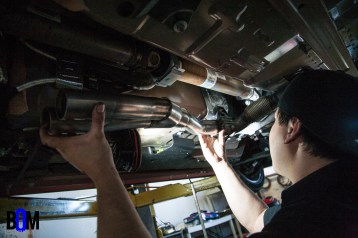 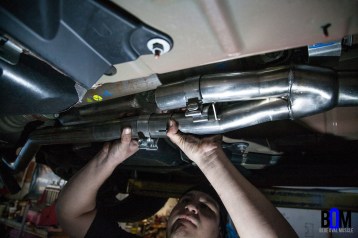 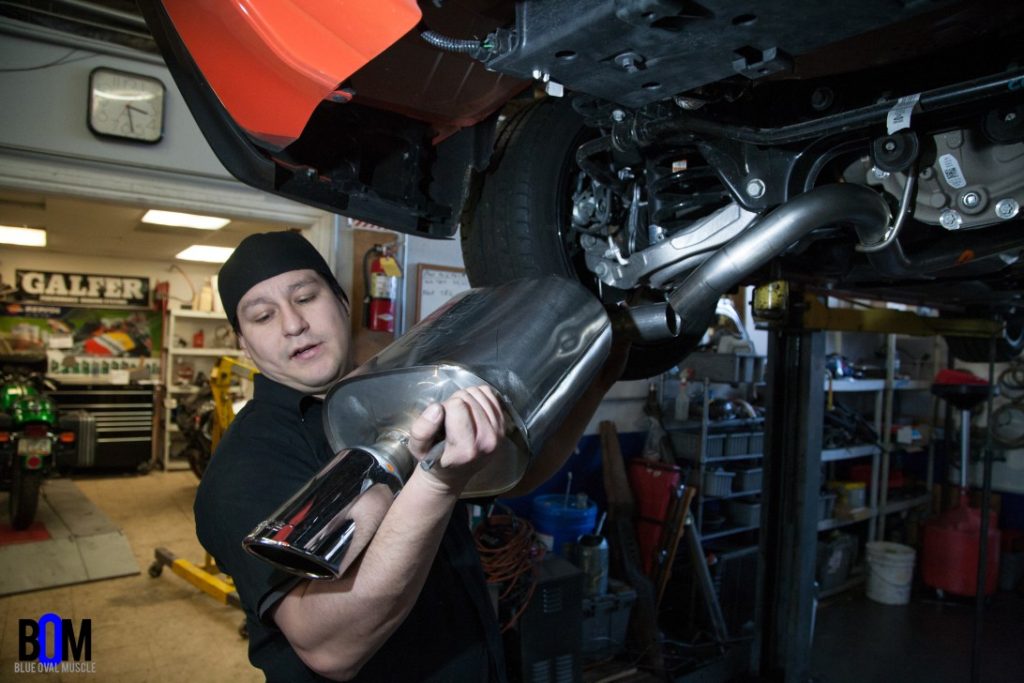 On the dyno & from the driver’s seat

After a half-day on the lift and dyno at BRG Racing, our efforts were rewarded with nice increases in power and large helpings of torque. For the full details, view the captions where you can chew on the nitty-gritty and compare the graphs.

In the end we gained 5hp and nearly 50 lb-ft at peak to the wheels with the XR-1 Tuner and the S-Type cat-back exhaust on 91-octane California fuel. While peak figures are important, what really matters on the street is the power under the curve, and in that right the Borla modifications added nearly 20hp and 40 lb-ft at the wheels from 1500 pretty much onward – these are sort of gains that are immediately felt on the street. The car now spins the tires at will when leaving a light and brings merit to the the adage: horsepower sells cars but torque wins races. The entire Borla exhaust system is a thing of beauty that not only sounds amazing, but looks the part too.

Sure, our mods won’t light the world on fire; for that you’ll need to step up to a downpipe, bigger turbo and a custom tune. But for the sort of real-world gains that can be felt during the daily slog, these Borla modifications are just the ticket. Read on for all the details.

For those wanting more than what the stock turbo can provide, Borla recently released their EFT Turbo Upgrade kit centered around a BorgWarner ballbearing turbo, bigger intercooler, downpipe and all of the associate components that’s said to boost power by 100hp, extending top-end power toward redline and maintaining good throttle response without considerable turbo lag.