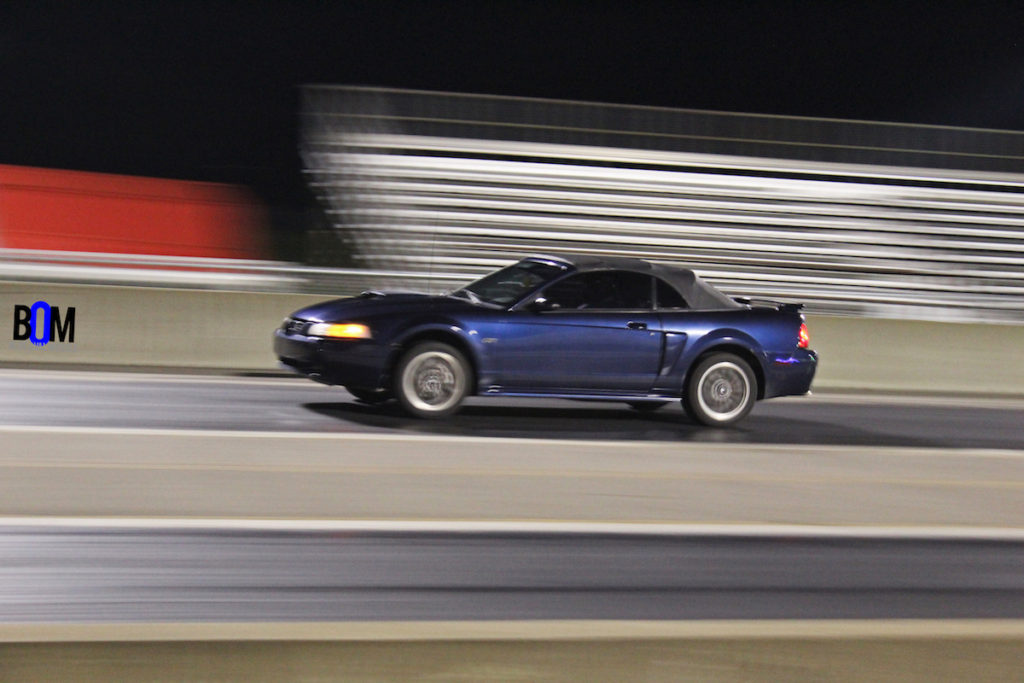 Building your 1999-2004 Mustang into a street or track monster that can handle large amounts of horsepower takes the right combination of engine parts and supporting mods. This guide gives you a rundown of the parts you’ll need to assemble a high-powered SN95 Mustang.

When it comes to building a high horsepower engine, you can’t beat the Ford 4.6L block as a base. The stock Mustang GT block has been known to handle up to 500 flywheel horsepower. However, this is flirting with disaster. Granted, with the proper mods the 4.6L can handle well over 1000 rwhp! Not bad for a stock cast block, especially one with the revving capability of the 4.6L.

There were two cast iron blocks used in the Mustang GTs. One is the Romeo, and the other a Windsor (named for the factory they were produced at). The Windsor is pretty easy to identify as it has a “W” cast into the valley area between the cylinders and also on the front of the block. The Romeo block has an “R” stamp instead. Instead of taking apart your engine to find our which engine you have, you can also reference the VIN numbers. The Windsor block has an “X” in the 8th spot, whereas the Romeo has a “W”. The Windsor The main bearings on these two blocks are not interchangeable. These blocks utilize two main bolts and two precision dowels to locate the main cap. 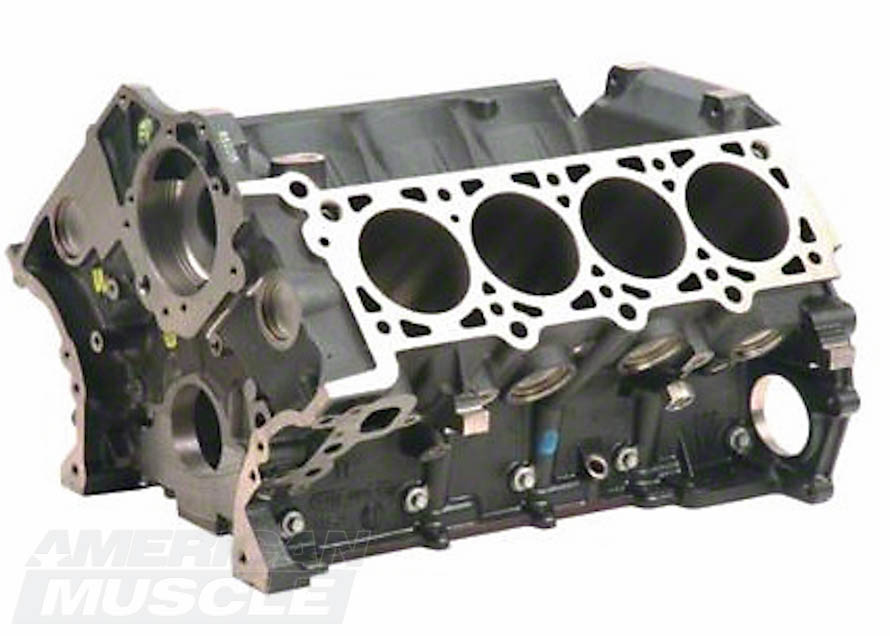 The Aluminum Block & When to Upgrade the Block

Upgrading the engine block depends on the amount of power desired. If being kept at 600 or under, keeping the stock block is perfectly acceptable. If going above and beyond that, getting an aftermarket block is fantastic security that can also help with shedding weight from the nose in certain circumstances.

Ford used the aluminum block in a number of cars, the most desirable being the Teskid block. The Teskid was used in the ’96-’98 Cobra and the ’93-’98 Lincoln Mark 8. Any aluminum blocks after ’98 is the Windsor or WAP block. Both blocks work great, but the Teskid is always sought after since it was produced for Ford by Ferrari. The aluminum blocks use four main bolts and two side dowels. Teskid aluminum blocks are a great way to shed 75lbs from the front of your Mustang GT. 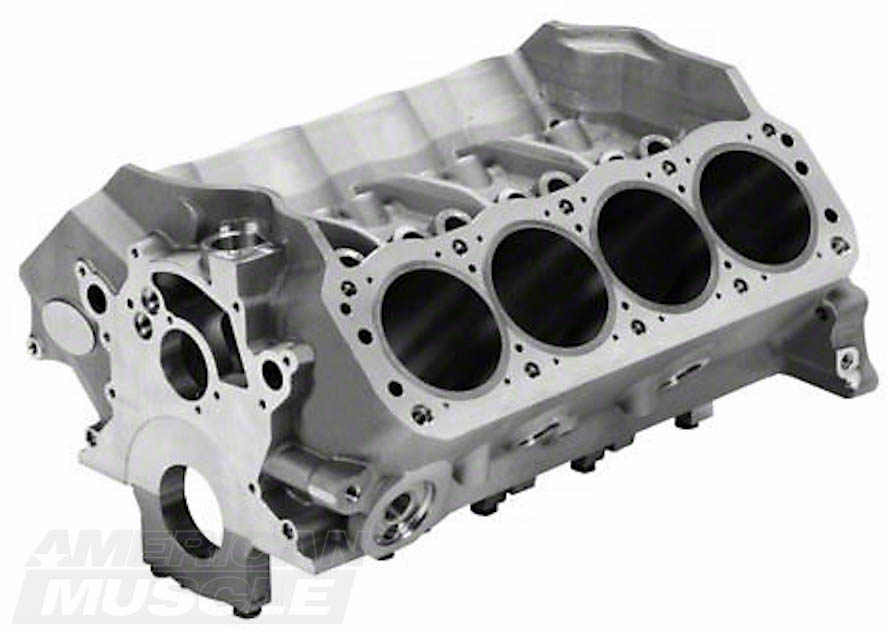 The Weak Points of the Stock 4.6L Mustang GT’s Engine

The stock 4.6L engine has a comfort zone of around 425-450 flywheel horsepower. Anything over that, and the rotating assembly could let go and “poof” goes the engine. However the aftermarket provides a host of supporting parts that can easily handle over 1000hp.

How Strong is the Stock GT Crankshaft?

The stock crankshaft is a cast-iron piece and is good on applications up to 500hp; anything over that and a forged steel crank is in order. These can be found used as they came stock in the Cobras and can handle 1500hp when cleaned up and 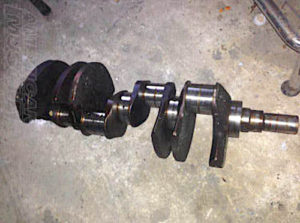 machined. The forged crank is a must for any serious build.

Do I Need to Replace the Main Caps and Bearings?

The main cap bolts on all the 4.6L engines are one-time use only. When building a new engine, they must be replaced. ARP offers a set of main cap studs to replace these bolts that are infinitely reusable. These are a nice upgrade. The Windsor cast-iron block uses a side bolt to locate the main cap; this is also a one-time use bolt. ARP also sells a set of side bolts for the Windsor mains.

If you spend time searching you’ll find many companies offer quality bearing sets for the 4.6L, which usually include the connecting rod and main bearings. One available option is the coated bearings. They offer increased lubricity and bearing life. However, you lose a couple thousandths of an inch, so make sure you have the proper bearing clearance. You may need a little extra machining to accept these bearings. 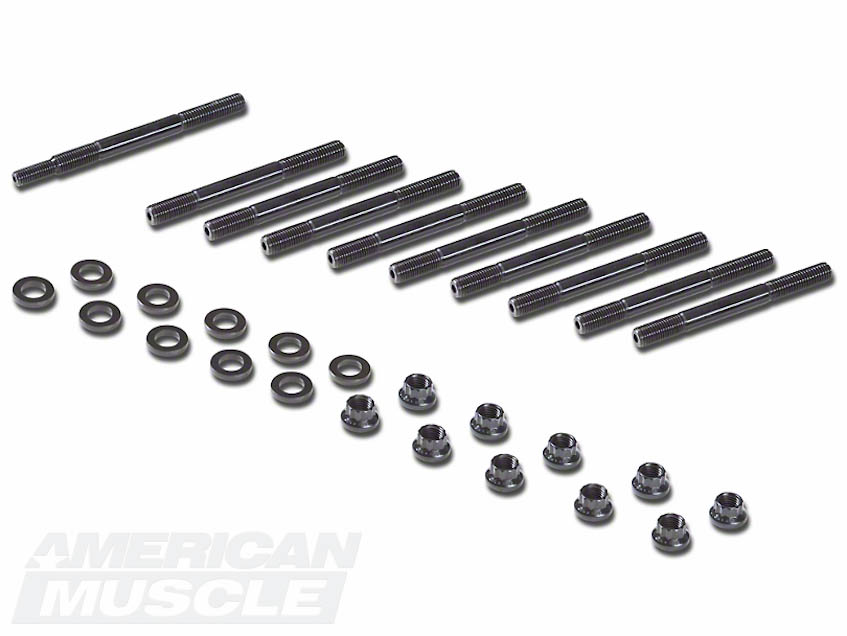 The stock connecting rods from Ford are a powdered metal unit. This new manufacturing method proved to be more cost effective. They are pretty tough, but are prone to cracking under harsh conditions. This is definitely a part to upgrade for a performance engine. There are two types of forged connecting rods available: H-beam and I-beam. Engine builders will debate which rod is better until the end of time. 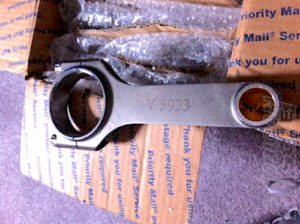 Basically gram for gram, the I-beam connecting rod is stronger than the H-beam. To compensate, the H-beam rods are generally a little heavier. When building an all out race engine, rotational weight is a big factor. With that being said, they are both huge improvements over the stock rods.

The important thing for a high performance street/strip Mustang is choosing the right rod for your application. Unless you are building a 1500hp drag car, either will do the job. A good set of forged rods will easily handle 1000 hp or more depending on design.

Ford chose hypereutectic pistons for the Mustang GT. They work well up to 450 flywheel horsepower. If your goals exceed that, you’ll have to upgrade to a set of forged pistons. Quality forged pistons are generally made of 2618 aluminum alloy, and include 4130 chromoly wrist pins. This is a very high strength steel alloy with a great weight to strength ratio. They can generally handle 35 lbs of boost safely. The Manley and JE forged slugs place the top ring down further, reducing heat exposure to the ring during combustion.

What About the Electronics?

Talking strictly about the engine itself (not the ECU or other components) there are a slew of electronic parts you’ll want to consider upgrading. To start with let’s talk spark. A quality spark will provide an even burn during combustion. Too long of a burn and you can’t maximize power, and too quick of burn restricts how much power you can make (consider why you’ll hear enthusiasts recommending higher octane fuels. It’s all about the burn).

You’ll need a spark plug that can handle the heat your engine produces and deliver a good spark. Any time you raise internal temperatures you’ll need a “cooler plug” or a plug that resists heat better. Too cold and you’ll get deposits on the tip. Too hot and you risk melting the plug. The plug that’s just right will consistently give you a quality spark. 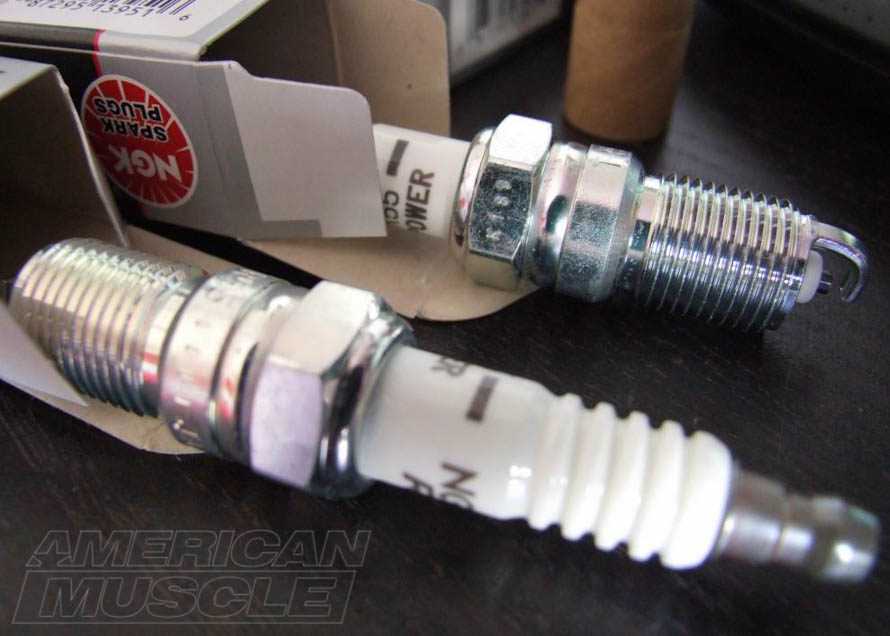 Coil packs help ensure quality spark, but in a different way. When a coil recieves the signal to fire, it discharges it’s stored electricity to power the spark plug. What happens if you’re building a high RPM engine and your coils can’t keep up? You won’t get consistent spark fires. Aftermarket coils have the capability to fire quicker than stock coils at 5k RPMs and higher.

Another key electronic component is your fuel injectors. Aftermarket injectors have a different nozzle to better atomize fuel (giving you more power and more miles per gallon to a degree). Perhaps even more important than that is how much fuel and pressure they can handle. The more air you force into your engine the more fuel you’ll need to compensate. Injectors are rated at pounds per hour of fuel delivery. Depending on how you’ll be building your engine, injectors are a must. 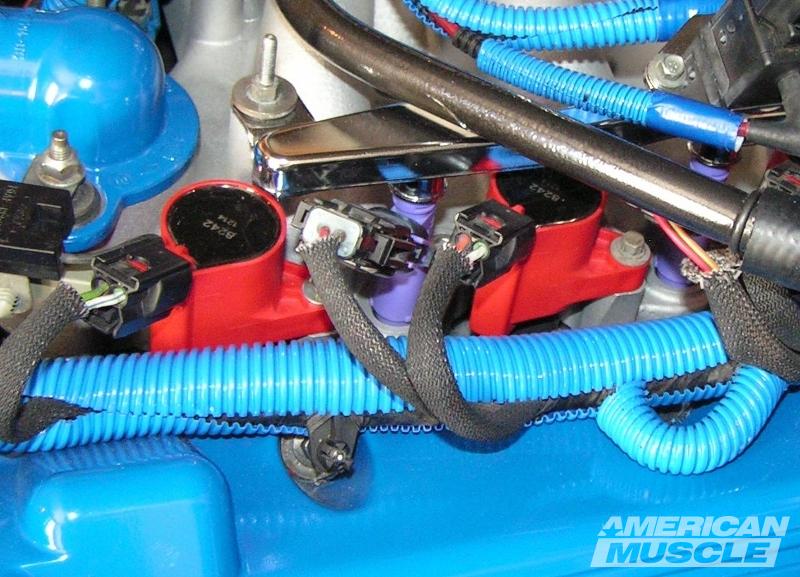 Should I Just Get a Crate Engine For my Mustang?

Some folks don’t care to go through the work and hassle of rebuilding a high performance engine. Well fret not my friends. Ford Racing makes crate engines for the mustang GT and Cobras as well. They are assembled with all the quality components listed above, and assembled by the experts at Ford Racing. They devote a lot of time to research and development of their products, and their engines usually include a 2 year/24,000 mile warranty.

As previously stated, the weak link remains as the connecting rods. On 4.6 4V engines, there are different variants within the model itself. The 4 valve engines that were installed in 1996-2001 Cobras and 2003-2004 Mach 1s can hold around 450 rwhp. The 2003-2004 Cobras are different in many ways though. They came not only with forged rods, but also pistons and crankshaft. These modifications allowed for Cobras to hit well over 500rwhp with the stock supercharger. If the supercharger is upgraded, the amount of power that can be attained with the stock engine is around 700rwhp. 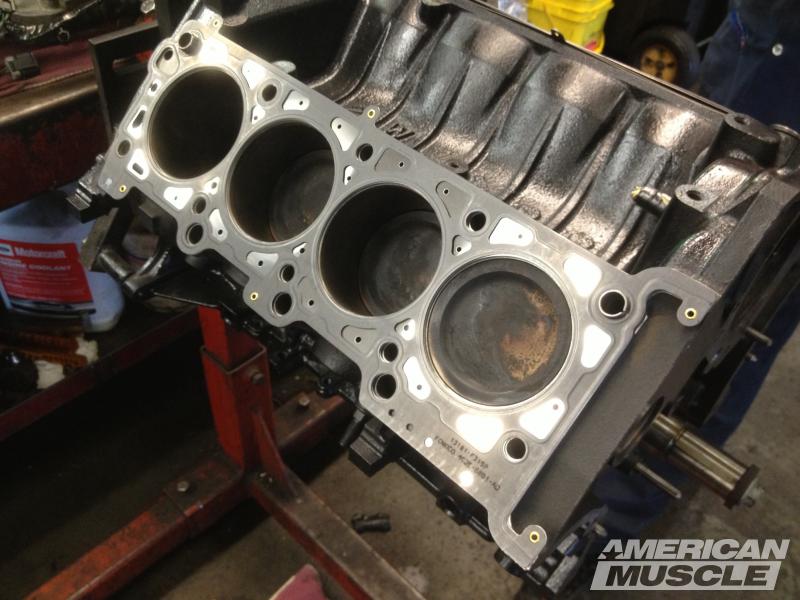 How to Build the Horsepower: Forced Induction

The quickest way is through boost, superchargers, and turbochargers. Compressed air delivers more air into the cylinders than your engine could normally handle. The stock internals can handle smaller amounts of psi (5-10), but if you want to push those bigger horsepower numbers you’ll need to push more psi. More psi means more pressure which means you’ll need some if not all of the stronger internal components listed above.

Camshafts change where your engine makes power depending on the camshaft’s lobe shape. A camshaft’s lobe can increase how long a valve is open for (duration) and how much the valve opens (lift). This allows your engine to breathe better and potentially rev higher to increase your horsepower numbers. This combination also changes how your engine sounds. Consider the iconic loping quality of older engines and drag machines.

While shopping for cams there are a variety of stages. The stage refers to the aggressiveness of the cam duration and lift. Too aggressive of a cam will turn your Mustang into a track only beast. Your end goals and build will help determine just how aggressive you want to go.

Intakes and Exhausts to Round Out the Build

Usually modders consider intakesand exhausts to be closer to starter mods. They are, but for good reason. Easier to 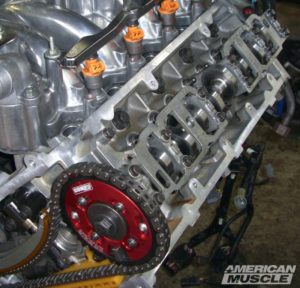 install, and with smaller power gains than add-ons like superchargers and camshafts. However, the factory set-up isn’t efficient enough to compliment those bigger add-ons.

Cold air intakes also reduce the temperature of the incoming air to give you small horsepower and torque boosts. Exhaust systems improve flow to get cleaner air into your engine faster. By themselves they don’t change much, but paired with a full build they’re necessary to make bigger numbers.

Use a Tuner to Tie Everything Together

A tuner is another necessity when building a high horsepower engine. The tuner will allow your Mustang’s ECU to account for the added air and fuel you’ll need to make big power. Without a tune there’s no way for your power adders to sync up with each other, restricting power and even risking damage to your engine. A dyno tune is your best option for the sake of accuracy. 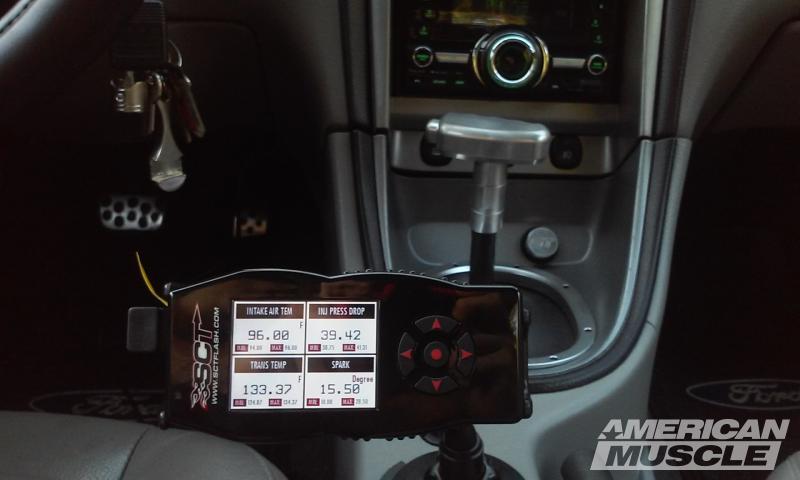 Whatever your initial goals are, allow yourself some headroom for future upgrades. So buy now, save later. Once your tired of the boost levels you’ve attained, you may want to increase those levels or add some nitrous. When the engine is built with the proper upgrades, this won’t be an issue. Use quality internals and quality fasteners such as ARP. Many view the 4.6L as the best small block Ford produced. It’s a fantastic base to build a street/strip car, or a flame breathing dragster. The choice is yours.