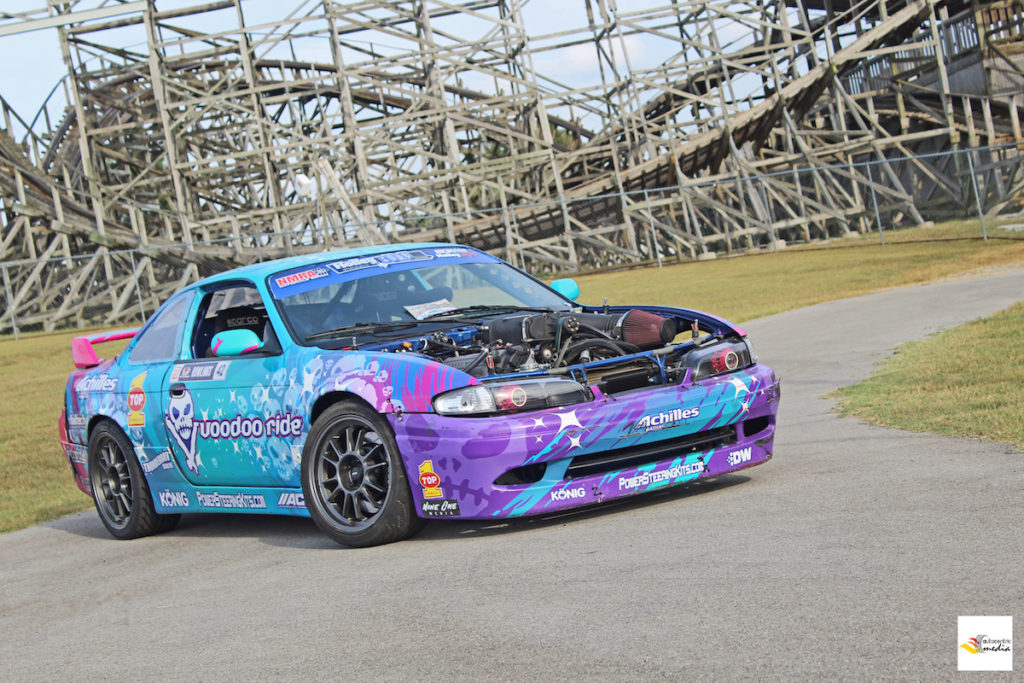 Being a media attendee of the inaugural Holley Ford Fest brought many surprises; from the original Bigfoot to the John Wick movie Mustangs. Naturally, there were lots of Mustangs on hand, a few of them we featured here already. But one car that we weren’t expecting to see, was an Aluminator equipped Nissan 240SX.

The Nissan is owned, built and raced by Kelsey Rowlings, a talented young woman who’s quickly making a name for herself on drift coursers all over the country. To the layman drift spectator, they may have been confused by the appearance of a 240sx competing in an all Ford event, perhaps speculating a traditional small-block swap between the flanks. For Kelsey, a pushrod 302 or 351 simply wouldn’t cut the mustard, so she set her sights a little higher.

Teaming up with Ford Performance for her powerplant, she ultimately acquired a 302 cubic-inch Aluminator engine. The Aluminator, for those who aren’t aware, is a pumped-up version of the popular “Coyote” powerplant. Of course, despite the automatic 500hp you would get from such an engine, it just wasn’t stout enough for Kelsey’s vision for the car. 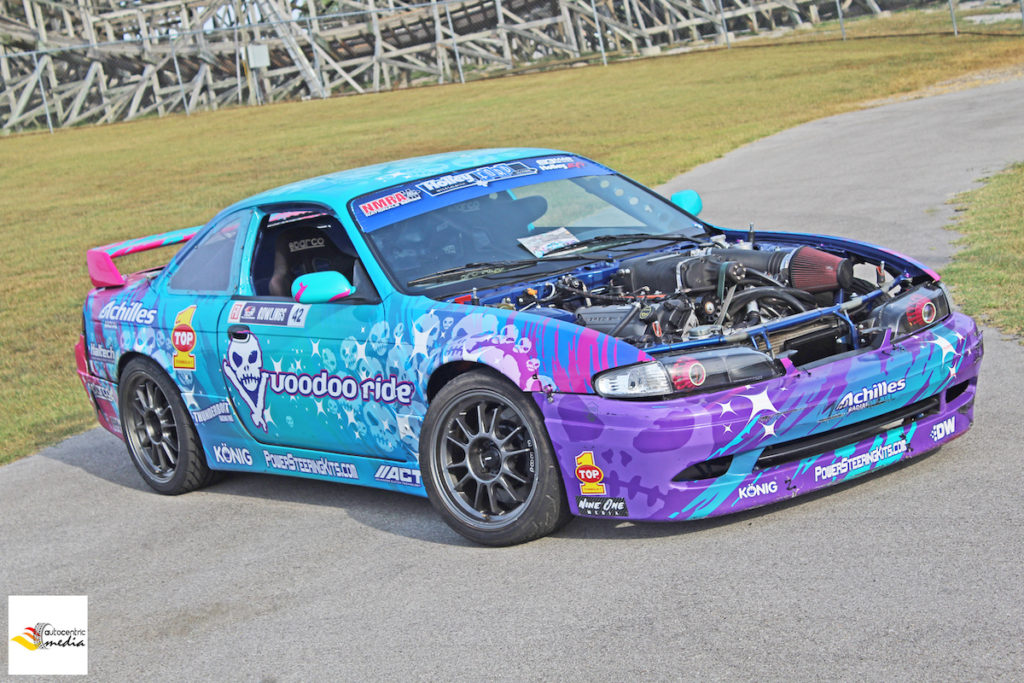 It’s not to say that the Aluminator is a shoddy engine, in fact, it’s quite the opposite as you can see from some of the specs below.

What Kelsey need was boost, in the form of a Roots-type supercharger from ROUSH. 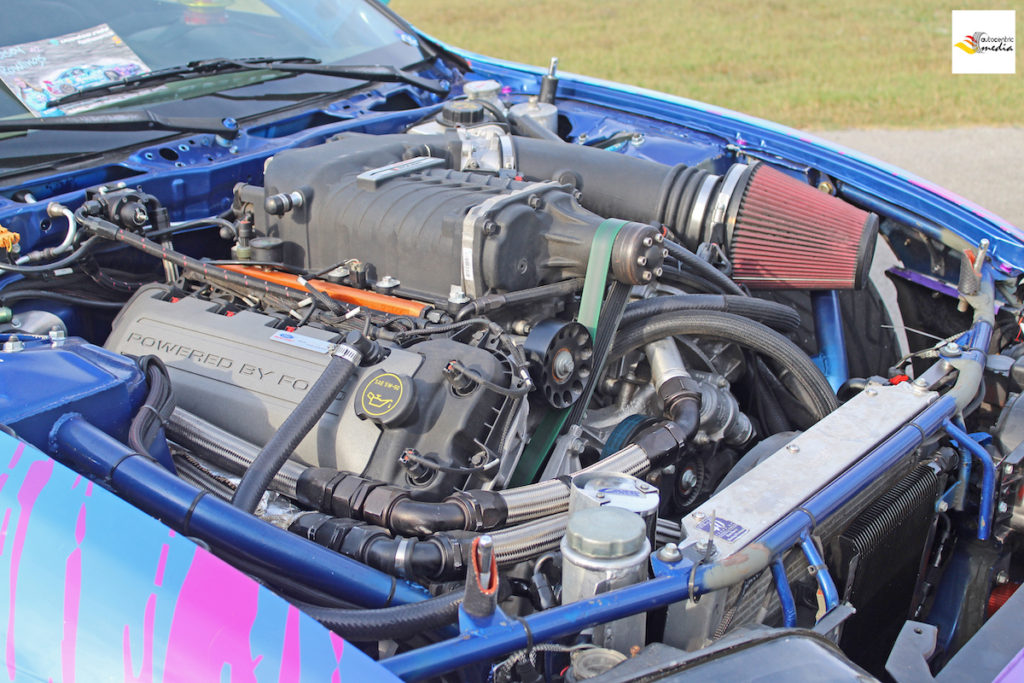 Rounding out some of the engine details include custom solid motor mounts modified stock exhaust manifolds (for frame rail clearance), as well as the switch to Thunderbolt E85 racing fuel for increased power output. A Haltech ECU is what makes the whole thing run, and what Kelsey used to calibrate the car with its specific modifications. 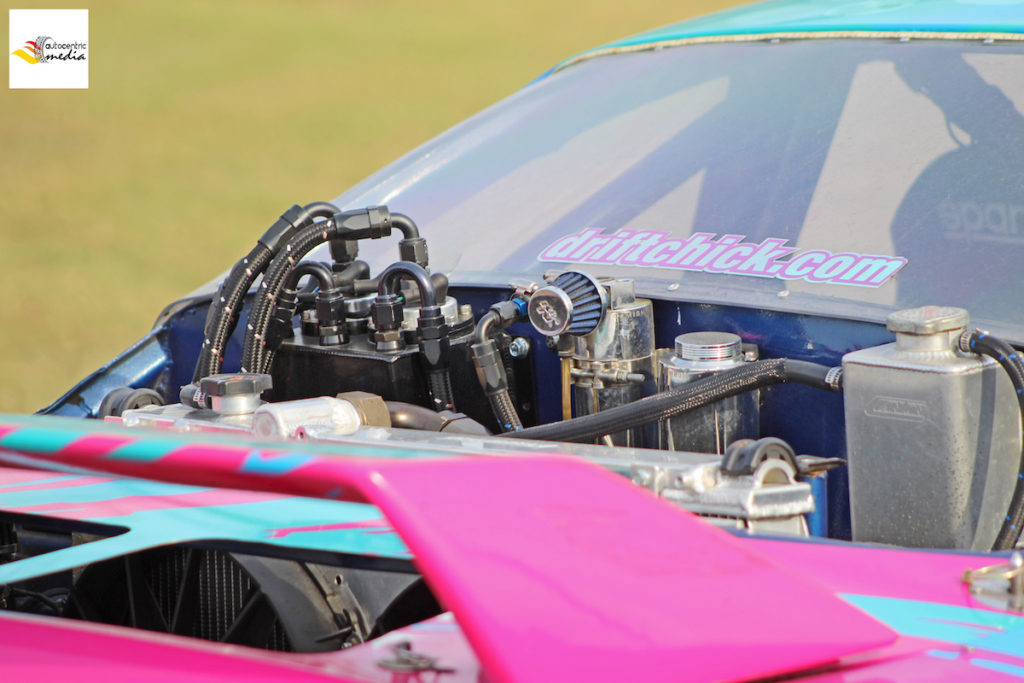 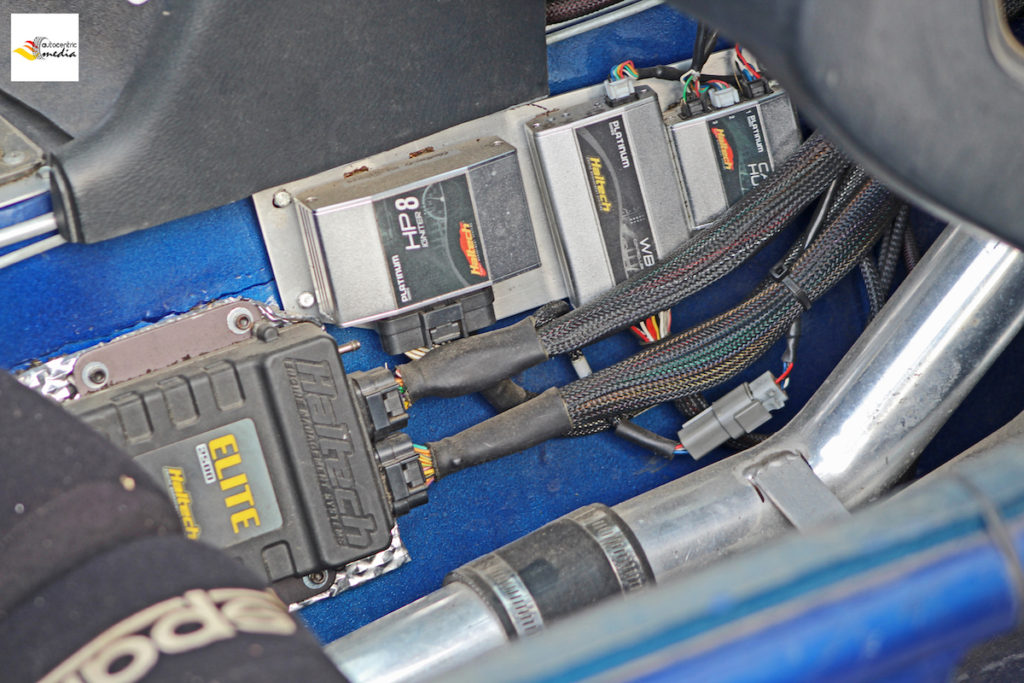 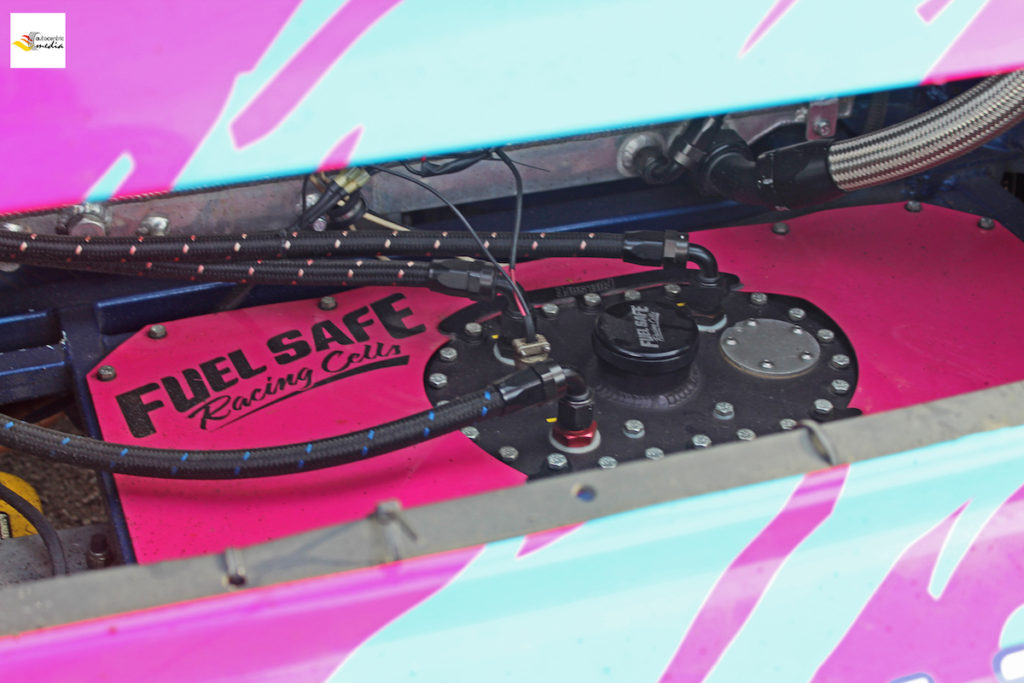 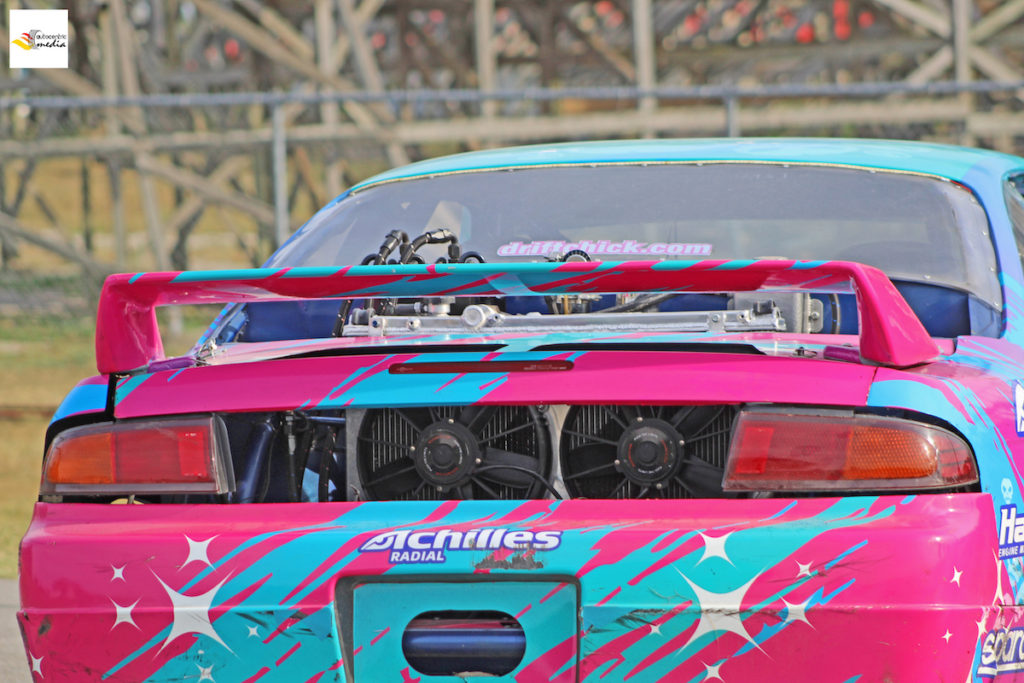 On the outside, cosmetic changes include a JDM stock rear spoiler, custom printed wrap, an Extreme Dimensions “Super cool” Body kit and 50mm overfenders. The hood, albeit it missing from this photoshoot (we elected to shoot it hoodless), is normally present and features a cowl for additional clearances and the same wrap as seen on the rest of the car. 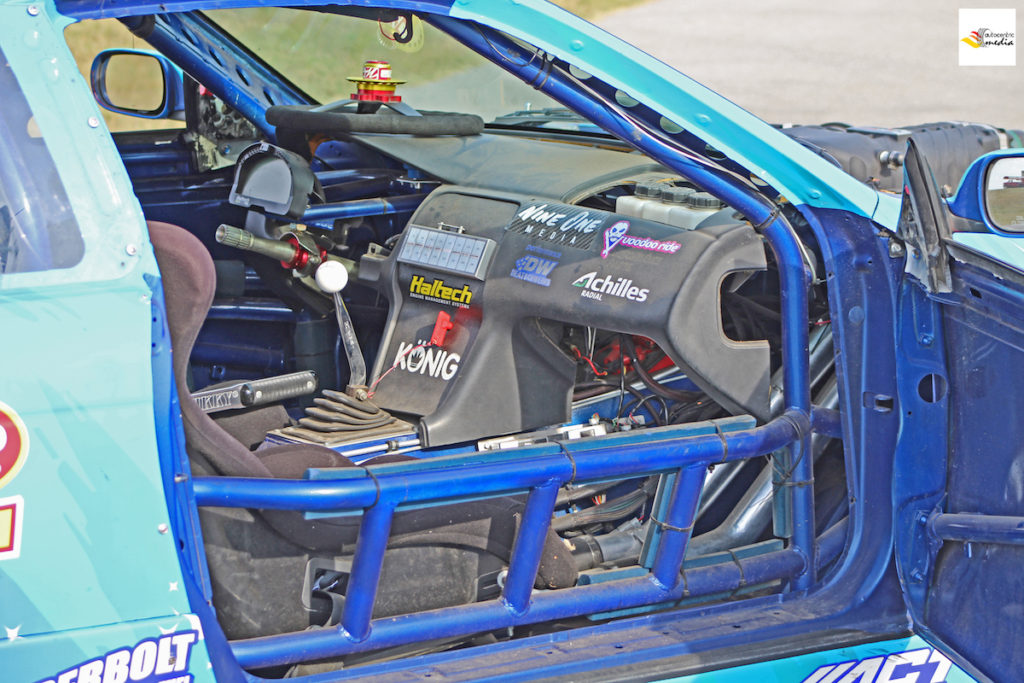 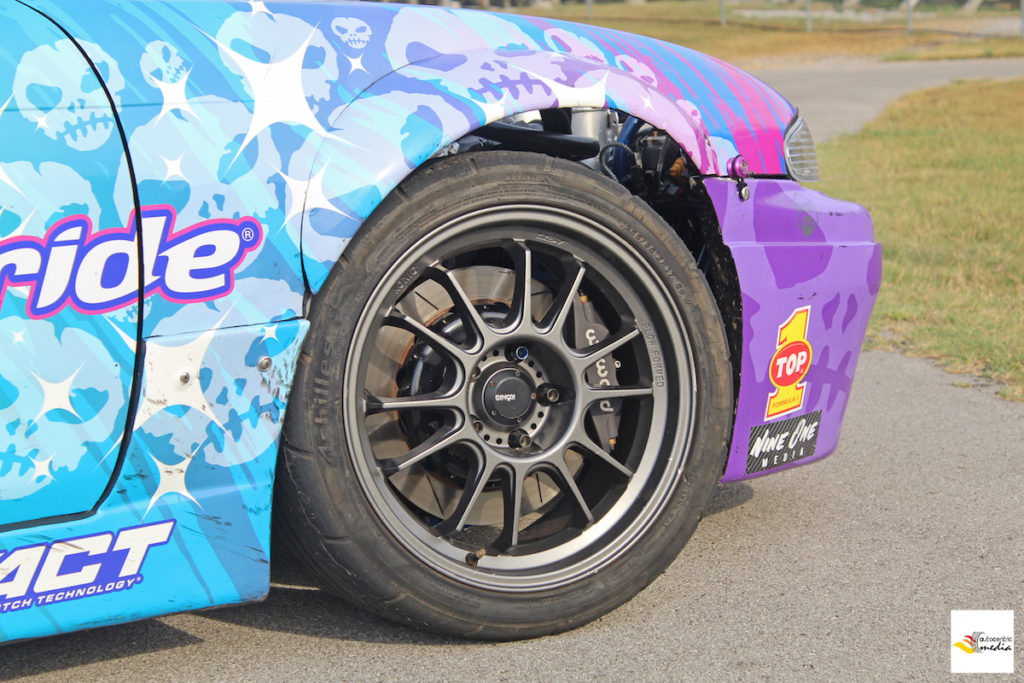 In the cockpit, a set of Sparco racing seats, harnesses and other safety equipment adorn the cockpit to ensure that Kelsey is kept firmly in the driver’s seat with the utmost safety in mind. Ao obviously, an SPA Technique fire suppression system is mounted in place, as is a full Formula-Drift spec roll cage. 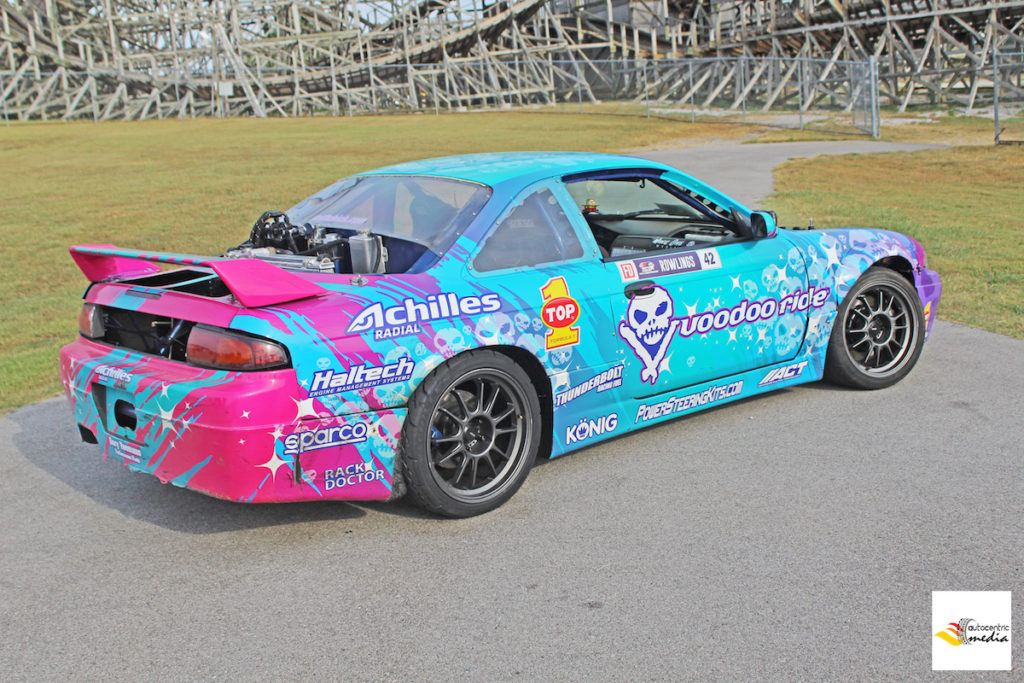 This car was purchased as a shell and built in seven months to create a unique and competitive car for Formula Drift Pro-2. It is the only s14 with this engine swap. The compression of the NA aluminator combined with the supercharger allows for amazing low-end torque making it the ultimate drift car.

The fabrication needed to make the aluminator engine fit in the S14 engine bay was extensive but worth it. After years of testing and making small changes, mostly to get the power steering system to work properly, team Drift Chick finally feels they have an extremely competitive car and look forward to the 2020 season (if Covid-19 doesn’t force all the events to be canceled). 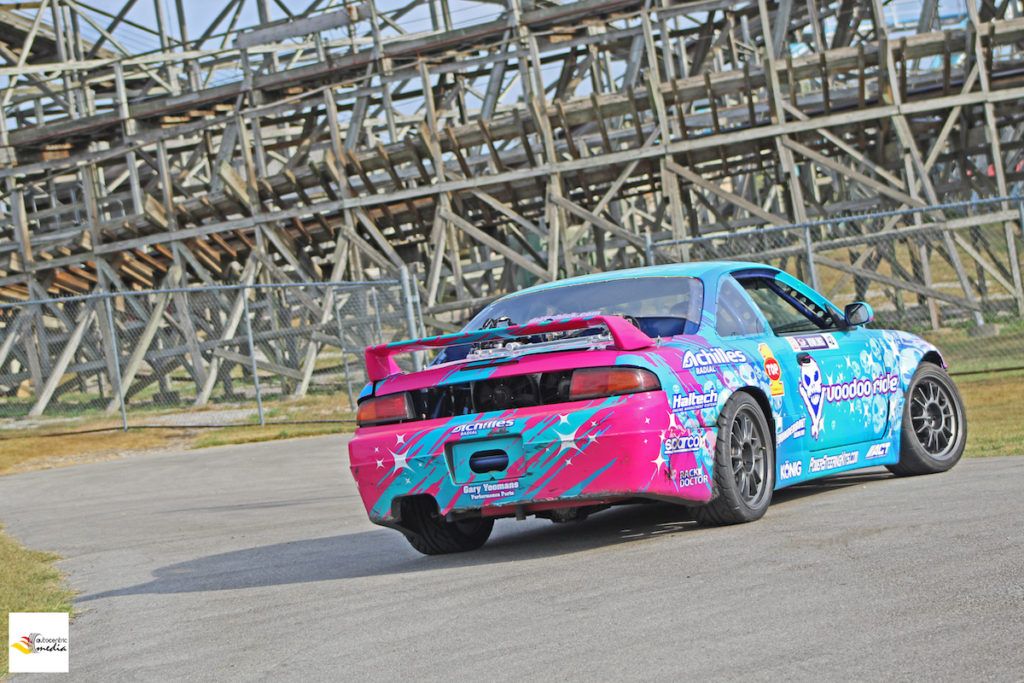