This Droptop ’69 Cougar is “Puuurfectly Beastly”

In 1969 Mercury was still a “thing” with its own serious line of muscle; Cyclone CJs, Marauder X100s and of course the sister-ship to the Mustang—Cougar. Bigger, lower and at least as fast as before, the Cougar was by ’69 a refined luxury machine. If you were hankering for a Cougar and wanted a 302 to save on fuel, then don’t bother venturing into the Mercury dealer and asking for a puny powered cat. Nope, ya just couldn’t get one. By ’69 the smallest power plant available in the winged helmeted God’s environs was a “little” Boss 302 in the Eliminator—and fuel efficient it wasn’t—unless you count efficiency in how MUCH fuel it used.

Next up was a 351 two-barrel; even it came standard with a Ford 9-inch rear axle. And if you wanted to put claws to the cat, you could step up your game from there because Mercury was shoving all manner of Ford heat under the hood of its fleet. The 351 two barrel was only the beginning, you could step up your game from there and plop down the bread for a 351 four-barrel, the aforementioned Boss 302, a 390 four-barrel, or the grand motha of them all, a 428 Cobra Jet. And cooler still these nasty plants could be had in any form of Cougar you could buy—including the convertible, well accept the Boss 302, it was only available in the hardtop Eliminator.

This brings us to our subject car; a highly optioned and fairly rare convertible XR7 (If you call 173 of a total 209 1969 428 CJ convertibles rare…and you should). This car is the pride and joy of Steve Polansky who hails from the great state of New Jersey.  Steve is what we often refer to as a “Cougarholic” and back in the early 2000s he went in search of a cat. What Steve found on eBay, and then a collectors garage, was enough to set any Cougarholic to fits of “here, shut up and take my money”.

Though it didn’t look like what you see here, the car was something special. That would have been evident by the VIN which held a magic letter in the fifth position: an R. In 1969 that denoted a 428 Cobra Jet Ram Air engine with the 735 CFM Holley and gobs and gobs of torque—like 440 ft/lbs of torque. This engine was the one that won the Winter Nationals in ’68 under the sure foot of Al Joniec; the one that put Ford and Mercury on the map as a contender in the street matchups that were happening all across America in the ‘60s.  It was also the engine and car (albeit the lighter ’68 version) that “Dyno” Don Nicolson ground down to a 13.23 e.t for Super Stock Magazine in the August 1968 issue.

Same engine with roughly 280 pounds of fluff added to the sexy new body. So let’s just say that the 428 is Batman to the bodies Bruce Wayne—a slightly older and better fed Bruce Wayne—who can turn heads on the street. The “goody” doesn’t stop there. Behind the big mill Mercury plopped a C6 automatic and a 9-inch with 3.00:1 gears. Wait a sec, 3.00s?! Well those were slapped on cars that got air conditioning. It is theorized that this was done to keep over amped drivers from making the big ole Tecumseh AC compressor into a grenade. When you got the 428, you also usually got power steering and power disc brakes; though if you were of a racing mind those items could be left off. But who’d want to do that on a convertible XR7?

Beyond the “go” Steve’s rocket ride was also equipped with just about ever amenity on the option list from the lads at Mercury. Want some power windows? Right there on the door, brother. Want a console to rest your weary right arm on? Yep, right there between the seats. Need some leg room for ingress and egress? Whadda ya know, a tilt wheel. Need some tunes? How’s about an AM 8-track? OK so Steve DID upgrade that radio with an AM/FM tuner hidden in the old box; can’t blame him. Even the wheels were styled steel; though Steve opted for some Magnum 500 action instead. 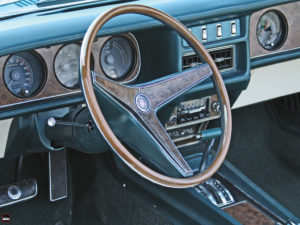 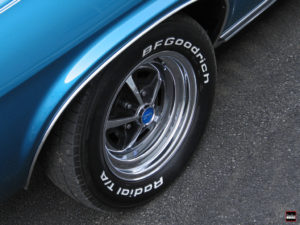 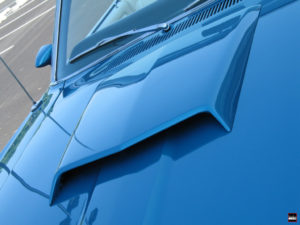 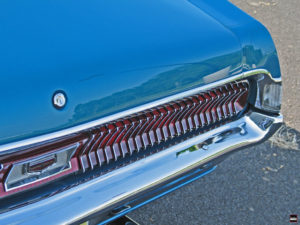 Mods to the car have been kept to a minimum. Because, you know, it IS rare, but a Pertronix Ignitor was added under the stock distributor to keep the engine thumping rather than stumbling.  He also ceramic coated the excellent flowing stock manifolds so that the rust monkey would be kept at bay for years and years. And because Steven likes his cars to rumble, a sweet 2.5-inch Flowmaster exhaust system was added to the fray.

After he plopped down the money for the 53,000 mile weary cat Steve began the daunting task of getting all the parts together for his perfect beast. So while he was gathering parts, Steven enjoyed his Cougar as a driver in need of TLC. Folks like Don Rush of West Coast Classic Cougar were immensely helpful in shoveling all the parts that were needed to bring the big cat to its current sexy state. Even the folks at Nationwide Auto Restoration (now closed) were Cougarholics and donated some tasty bits off of a few of the “yard cars” they had.

The color is all original Dark Aqua Metallic redone in a sweet base clear, while the interior has been spruced with new leather seating surfaces and door panels all done in the original white by Nationwide Auto Restoration. Assembly was handled by Steve with help from his son.

And since they finished the restoration on this now 67,000 mile beauty, they have been doing exactly what any red blooded American classic car owner would do—enjoying it, showing it, and maybe, just maybe knocking it in low, stepping on the brake and seeing just how much smoke a big ole FE can put in the air; and with 440 ft/lbs. of torque, you know that those 235/65 15 BGFs don’t stand a chance.

Jeff’s a huge Ford guy that knows what he loves in an automobile! With an extensive background in the print world, as well as being the host of his own YouTube channel, he brings a vast amount of insight and knowledge to Timeless Muscle Magazine.

Jeff's a huge Ford guy that knows what he loves in an automobile! With an extensive background in the print world, as well as being the host of his own YouTube channel, he brings a vast amount of insight and knowledge to Timeless Muscle Magazine.