This one’s long overdue for a number of reasons – partly, because it’s actually the first Turbo Buick car feature we’ve ever ran in GM EFI Magazine. Secondly, it’s a car that we’ve had our eyes on for a while, being as how it’s a turbocharged, LS-swapped G-body. Although the purists might scoff, the decision for the car’s owner, Francis “Fran” Johns, was an easy one.

Starting with a 1985 non-intercooled “hot-air” T-type, it’s a build that began with humble roots and stayed true to form throughout the process. Running across an ad for the car on Craigslist, Fran pulled the trigger on the G-body project after rescuing it from behind a local body shop in his neck of the woods; Pittsburgh, Pennsylvania.

In the early days of ownership, Fran took the barely running 3.8L Turbo V6 to the next level, by installing all of the typical bolt-ons associated with that platform. Thanks to the right selection of parts and a good tune, Fran brought the Regal down from its stock mid-15 second capabilities to a 12.50 at 105 mph. While it was an impressive achievement using minimal performance parts, the car was largely unreliable.

“The car sat for two years after that and it would later become the first custom turbo LSx car that my shop built.” -Fran Johns

Fran relates, “I bought the car in the summer of 2010 with the original 3.8L turbo V6. After the usual mods like an intake, Turbo Tweak chip and methanol injection, I had the engine rebuilt for the car but I ultimately sold it to a customer. The Buick sat for two years after that and it would later become the first custom turbo LSx car that my shop built.”

Being the owner of FJ Performance, a tuning shop that specializes in late-model GM hardware, meant that building a boosted LSx powerplant using secondhand parts was easy. Fran sourced a 120k-mile 2001 5.3L truck engine for $400, and then built the rest of the car on a shoestring budget.

In fact, the build was so cost-effective that the 325 ci. powerplant is largely untouched; even down to the stock heads, only swapping out the head gaskets for LS9 variants and replacing the factory bolts with those from ARP. Otherwise, everything is how it was when it shipped out of the General Motors engine plant fourteen years ago. The only change that has been made to the long block is a Speed Inc. boost-friendly cam swap, while a simple Hummer H3 oil pan and GM high-flow oil pump keeps the rotating assembly lubricated.

Up top, the OEM truck intake has been ditched for an Edelbrock Victor Jr. aluminum manifold with an Extreme Velocity top hat and a FAST 4150-style throttle body. Helping the engine build power is a FJ Performance-modified Garrett GT4202R snail that cranks out 10-15 psi. of boost, depending on the tune. It’s paired with a Precision Turbo & Engine wastegate and a GN1 Performance Extreme front-mount intercooler that’s attached to 3-inch diameter hot and cold side tubing. 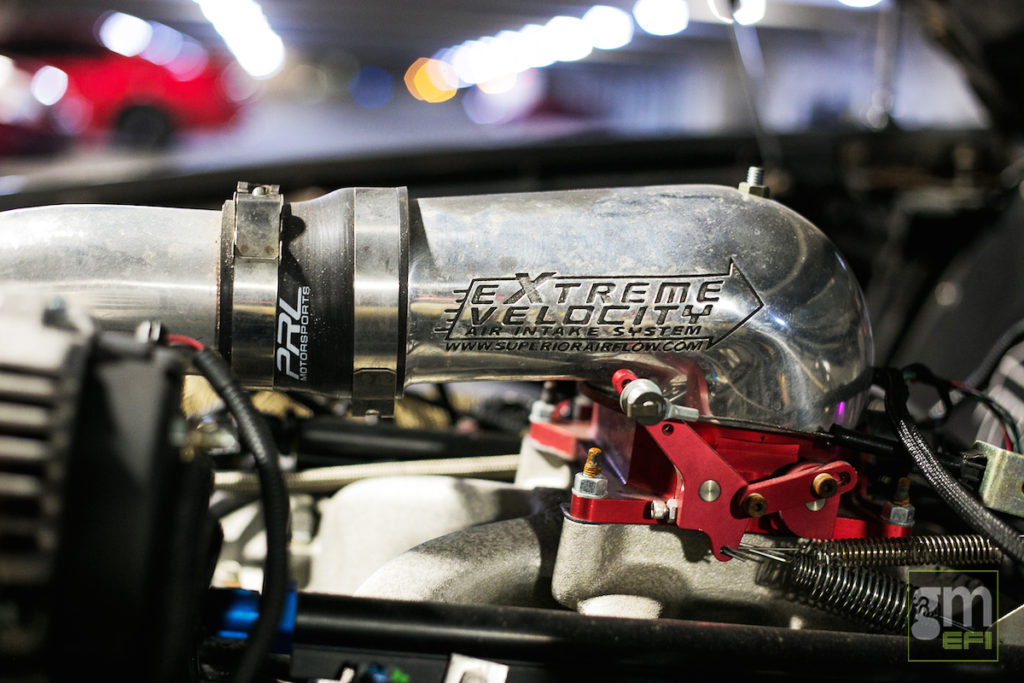 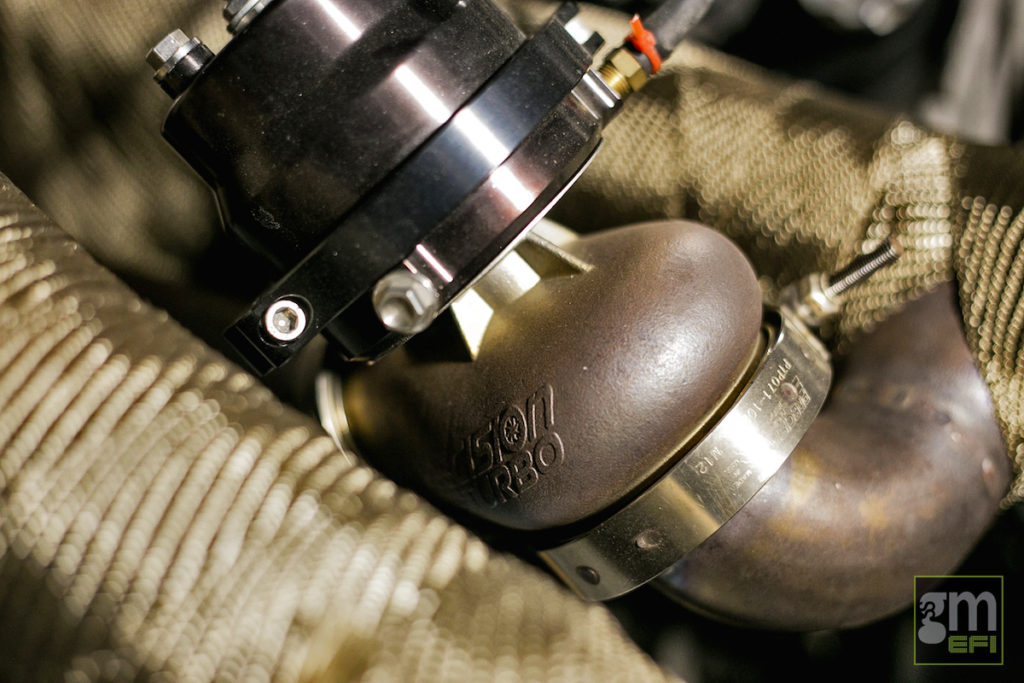 Helping the 4-inch downpipe expel the spent gases are a pair of FJ-fabricated, custom turbo exhaust manifolds and a GN1 dual 3-inch exhaust. The fuel pressure is adjusted using a Magnafuel adjustable regulator that’s set to 43.5 psi. A set of eight DeatschWerks 95-lb. fuel injectors and twin, in-tank Walbro GSS342 pump are responsible for getting the fuel from the tank into the engine.

Sitting behind the boosted 5.3, is a fortified 4L80E gearbox built by Lonnie Diers of Exteme Automatics. Between it and the engine, is a Yank 3800-stall torque converter and a Reactor billet flexplate. Sending the power to the completely stock 8.5-inch rear axle, is a 3-inch steel driveshaft.

The suspension wasn’t overlooked, either. Up front, the sway bar was ditched altogether and the stock shocks and springs were tossed in favor of a QA1 ProCoil coil-over kit. While the OEM upper A-arms remain in place, UMI Performance lower A-arms attach to the QA1 coil-overs. Out back, an HR Parts N’ Stuff sway bar, Summit Racing adjustable shocks and OEM springs sit in place, as well as TRZ Motorsports upper and lower control arms. 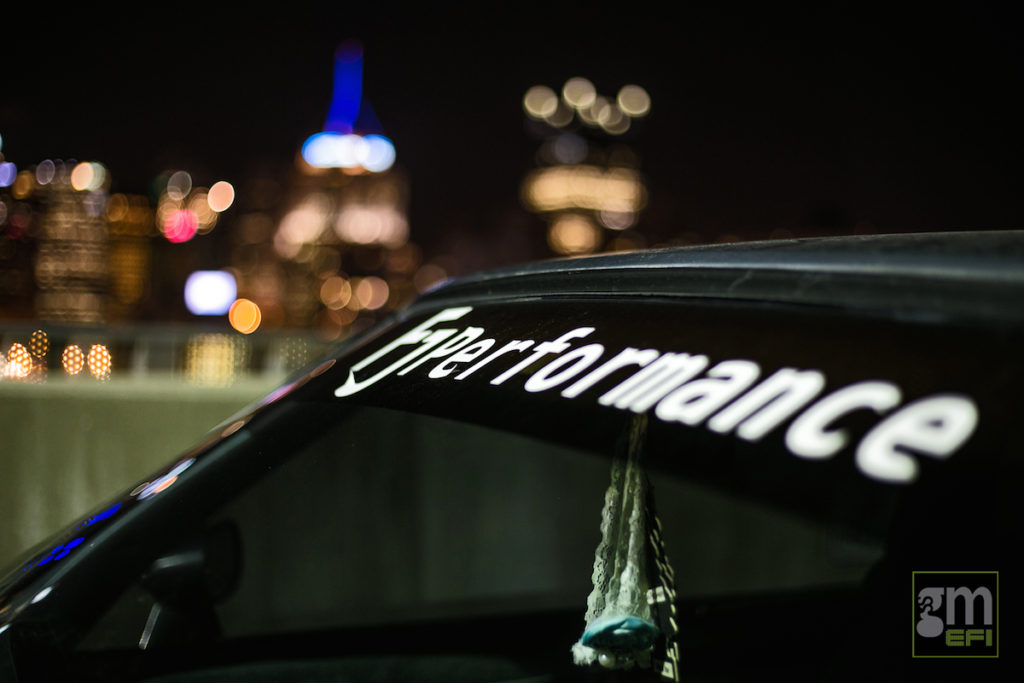 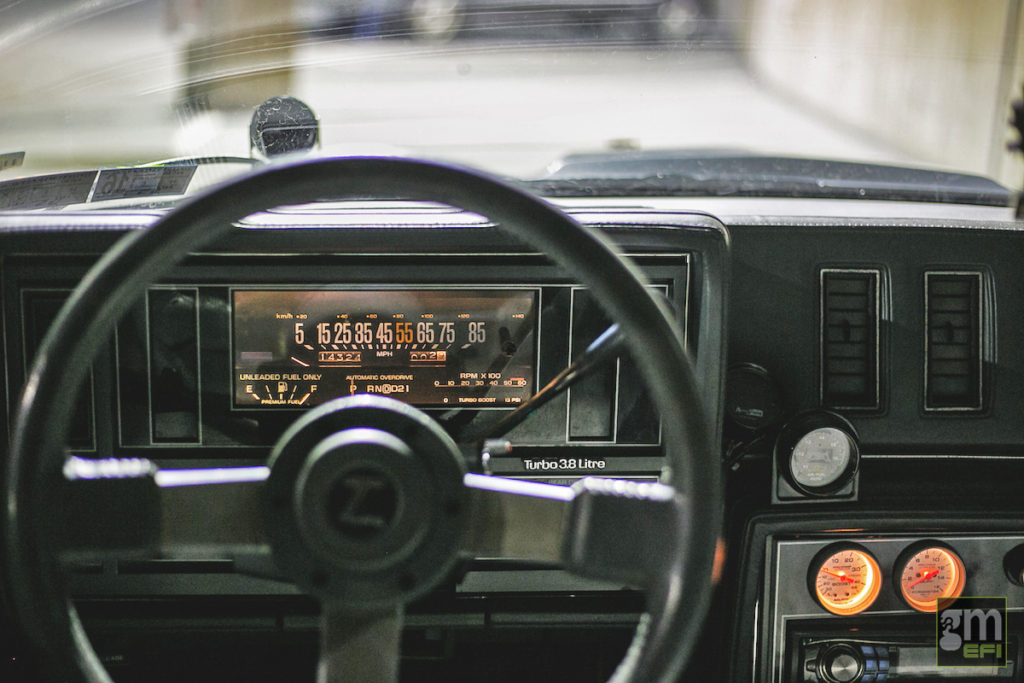 Rolling stock consists of black Cragar D-window wheels, spec’ing in at 15×8 up front and 15×10 out back. Pep Boys Futura Super Sport radials wrap the narrow wheels, with every ounce of sticky compound from the Mickey Thompson drag radials out back keeping the Buick planted to the pavement.

With the recipe selected, Fran broke out the tuning software and dialed everything in himself. The ending result is 593 horsepower and 542 lb-ft of torque making its way to the Pennsylvanian surface. That number translates to a solid 10.81 at 126 mph at Pittsburgh Raceway Park. Not bad, for an all year round, all-weather daily driver.

That’s right, this thing sees rain, sunshine, snow, salt… everything. Hence it’s rather rough-around-the-edges, salt-splashed exterior that includes a set of GNX wheel flares. Truth be told, Fran built the car as a reliable 10-second daily-driver – that’s it. “Mission accomplished,” as he boldly tells us.

While most Turbo Buick purist would want to burn him at the stake for such an automotive infraction, we think it adds to the appeal in this particular case; after all, cars are made to be driven, aren’t they? He did say that the long-term goals for the T-Type include a complete restoration, however; including new floor pans, rust repair and naturally, all new paint. More power, too, probably.

“She is called the ‘Illegal Regal’ for a reason; burnouts, street pulls, a little ‘side racing’ and I don’t even know how many times this thing has snuck out with expired tags.” -Fran Johns

He credits Jason Rubin for giving him his blessing to LSX-swap a Turbo Buick, Matt Cresto for the custom turbo setup, Bobby Stipkovic for giving him that drive to finish building the car and last but not least, his wife, for putting up with all of the late nights and frustrations. Interestingly enough, it’s actually her favorite vehicle out of all of the vehicles they own.

In the meantime, his shop and other projects, including his personal, highly-built 5th-gen Camaro SS, manage keep him busy. We get the feeling that this isn’t the last time we will hear from Fran or his boosted Buick.